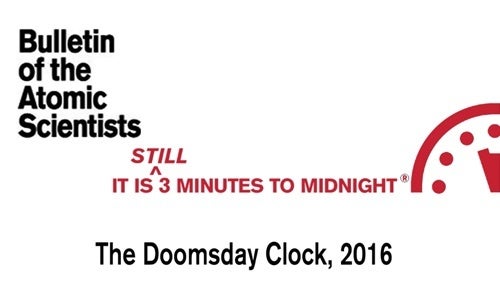 With “utter dismay,” the Bulletin of the Atomic Scientists announced Tuesday that the symbolic Doomsday Clock will hold at three minutes to midnight—at the “brink” of man-made apocalypse—because world leaders have failed to take the necessary steps to protect citizens from the grave threats of nuclear war and runaway climate change. 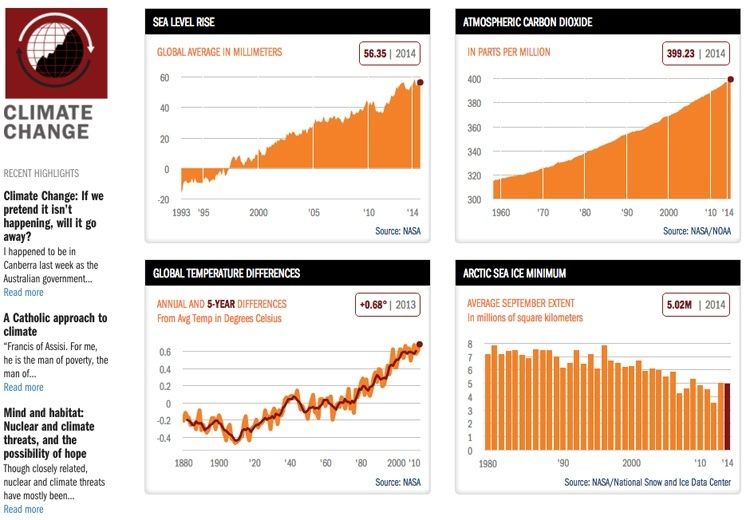 “Three minutes (to midnight) is too close. Far too close,” reads the statement by the Bulletin’s Science and Security Board.

The decision not to move the hands of the Doomsday Clock “is not good news,” it continues, “but an expression of dismay that world leaders continue to fail to focus their efforts and the world’s attention on reducing the extreme danger posed by nuclear weapons and climate change. When we call these dangers existential, that is exactly what we mean: They threaten the very existence of civilization and therefore should be the first order of business for leaders who care about their constituents and their countries.”

The Bulletin’s Science and Security Board in consultation with its Board of Sponsors, which includes 17 Nobel Laureates, ruled last year to move the clock forward from five minutes to midnight to three in response to the competing threats of “unchecked climate change, global nuclear weapons modernizations and outsized nuclear weapons arsenals.”

The board acknowledged some bright spots over the past year, namely the Iran nuclear agreement and the Paris Climate Accord, but said that “they constitute only small bright spots in a darker world situation full of potential for catastrophe.”

Even as the Iran agreement was hammered out, tensions between the U.S. and Russia rose to levels reminiscent of the worst periods of the Cold War. Conflict in Ukraine and Syria continued, accompanied by dangerous bluster and brinkmanship, with Turkey, a NATO member, shooting down a Russian warplane involved in Syria, the director of a state-run Russian news agency making statements about turning the U.S. to radioactive ash and NATO and Russia repositioning military assets and conducting significant exercises with them. Washington and Moscow continue to adhere to most existing nuclear arms control agreements, but the U.S., Russia and other nuclear weapons countries are engaged in programs to modernize their nuclear arsenals, suggesting that they plan to keep and maintain the readiness of their nuclear weapons for decades, at least—despite their pledges, codified in the Nuclear Non-Proliferation Treaty, to pursue nuclear disarmament. 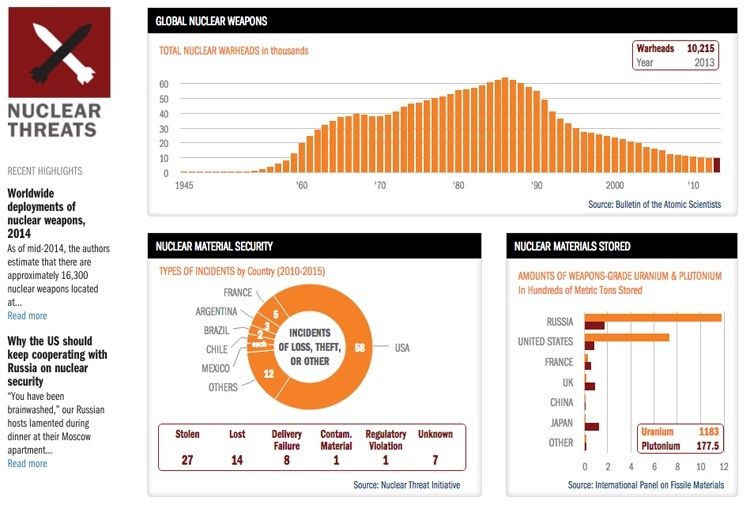 “What message does this send to non-nuclear nations about our intention to build smaller, more useable weapons?” asked Lawrence Krauss, chair of the Board of Sponsors and foundation professor at the School of Earth and Space Exploration and Physics departments at Arizona State University. “There is no sane strategic use of nuclear weapons. We need to reduce our nuclear aresenal, not make a new generation of weapons.”

Further, the panel described the COP21 agreement as merely a “tentative success.”

Sivan Kartha, a member of the Board and senior scientist and climate change expert with the Stockholm Environment Institute (SEI), said national pledges to reduce carbon emissions are “manifestly, unequivocally inadequate.”

“The voluntary pledges made in Paris to limit greenhouse gas emissions are insufficient to the task of averting drastic climate change,” he continued. “These incremental steps must somehow evolve into the fundamental change in world energy systems needed if climate change is to ultimately be arrested.”

Since the clock was first introduced in 1947, the hands have moved 22 times. As Rachel Bronson, executive director and publisher of the Bulletin, explained, the clock represents a “summary view of leading experts deeply engaged in the existential issues of our time.”

It has become a “universally recognized indicator of the world’s vulnerability” and is a symbol of “how close we are to destroying our civilization with dangerous technologies of our own making,” the Bulletin states. Such dangers include nuclear weapons, “climate-changing technologies, emerging biotechnologies and cybertechnology that could inflict irrevocable harm, whether by intention, miscalculation or by accident, to our way of life and to the planet.”

The clock does not move every year. In fact, prior to 2015, the countdown hadn’t changed since 2012, when it ticked ahead one minute.

A broadcast of this year’s announcement can be viewed here.