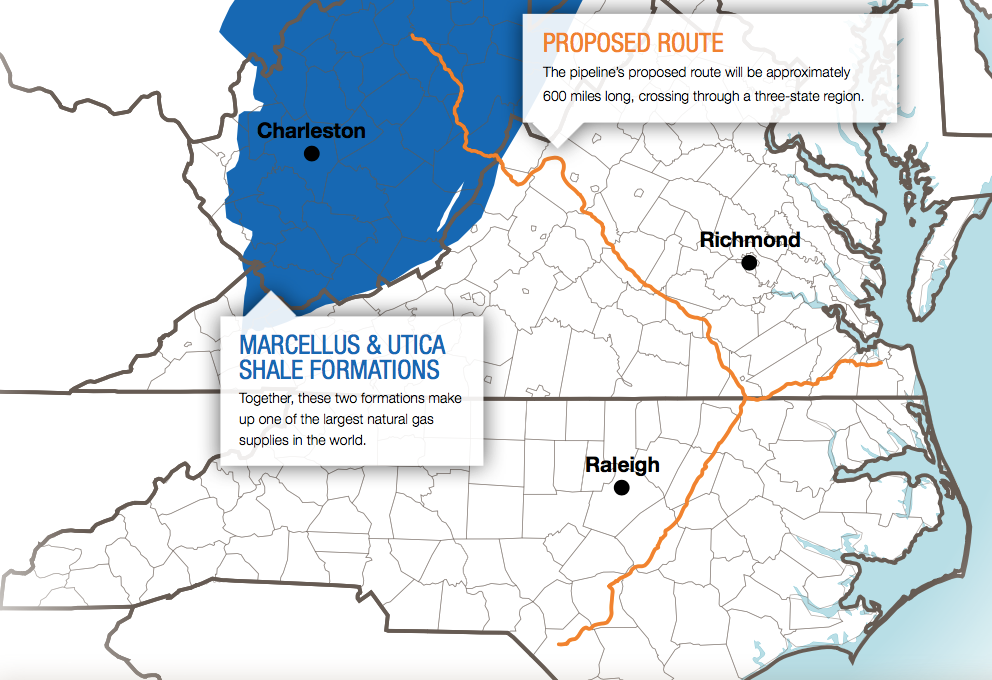 A new
briefing paper details how Dominion Energy‘s proposed Atlantic Coast Pipeline would involve the blasting, excavation and removal of mountaintops along 38 miles of Appalachian ridgelines as part of the construction.

The planned 600-mile interstate
pipeline will carry 1.44 billion cubic feet per day of fracked gas from West Virginia to North Carolina, cutting through forests, critical animal habitats and pristine mountains that Dominion would be required to “reduce” between 10 to 60 feet, according to the paper released Thursday by the non-profit Chesapeake Climate Action Network.

“In light of the discovery that the Atlantic Coast Pipeline will cause 10 to 60 feet of mountaintops to be removed from 38 miles of Appalachian ridges, there is nothing left to debate,” said Mike Tidwell, executive director of the Chesapeake Climate Action Network.

The paper was released in coordination with the
Allegheny-Blue Ridge Alliance, Friends of Nelson County, Appalachian Mountain Advocates and the Dominion Pipeline Monitoring Coalition.

Dominion, headquartered in Richmond, Virginia, is one of the nation’s largest producers and transporters of energy. The developer promises that the Atlantic Coast Pipeline will have “minimal environmental impact” and that “best-in-class restoration and mitigation techniques will be used to protect native species, preserve wetland and water resources, control erosion and minimize emissions.” Duke Energy, Piedmont Natural Gas and Southern Company Gas also have a stake in the project.

Environmentalists and other opponents
argue that the pipeline will have adverse effects on sensitive habitats, reduce property values and introduce dangerous precedents for the seizure of private property through eminent domain.

Joyce Burton, a board member of Friends of Nelson County, expressed fears that Dominion’s plan to build the pipeline on steep and landslide-prone Appalachian slopes could be catastrophic.

“Many of the slopes along the right of way are significantly steeper than a black diamond ski slope,” Burton said.

“Both FERC and Dominion concede that constructing pipelines on these steep slopes can increase the potential for landslides, yet they still have not demonstrated how they propose to protect us from this risk. With all of this, it is clear that this pipeline is a recipe for disaster.”

Opponents of the pipeline are demanding more transparency from the company.

Ben Luckett, a staff attorney at Appalachian Mountain Advocates, said it was “astounding” that FERC has not required Dominion to produce a plan for dealing with the millions of cubic yards of excess rock and soil that will result from cutting down the 38 miles of ridgetop for the pipeline.

“We know from experience with mountaintop removal coal mining that the disposal of this material has devastating impacts on the headwater streams that are the lifeblood our rivers and lakes,” Luckett added.

“FERC and Dominion’s complete failure to address this issue creates a significant risk that the excess material will ultimately end up in our waterways, smothering aquatic life and otherwise degrading water quality. Without an in-depth analysis of exactly how much spoil will be created and how it can be safely disposed of, the states cannot possibly certify that this pipeline project will comply with the Clean Water Act.”

Dan Shaffer, a spatial analyst with the Dominion Pipeline Monitoring Coalition, said there are too many risks involved with the project.

“Even with Dominion’s refusal to provide the public with adequate information, the situation is clear: The proposed construction plan will have massive impacts to scenic vistas, terrestrial and aquatic habitats, and potentially to worker and resident safety,” Shaffer said.

“There is no way around it. It’s a bad route, a bad plan and should never have been seriously considered.”

Here are some of the new paper’s key findings:

• Approximately 38 miles of mountains in West Virginia and Virginia will see 10 feet or more of their ridgetops removed in order to build the Atlantic Coast Pipeline.

• The majority of these mountains would be flattened by 10 to 20 feet, with some places along the route requiring the removal of 60 feet or more of ridgetop.

• Building the ACP on top of these mountains will result in a tremendous quantity of excess material, known to those familiar with mountaintop removal as “overburden.”

• Dominion would likely need to dispose of 2.47 million cubic yards of overburden, from just these 38 miles alone.

• Standard-size, fully loaded dump trucks would need to take at least 247,000 trips to haul this material away from the construction site.