By Steve Horn and Itai Vardi

On Jan. 25, President Donald Trump’s team listed the Atlantic Coast pipeline among the White House’s top priorities for infrastructure projects, an attempt to deliver on his campaign promise to invest in U.S infrastructure programs.

Doomsday Clock Now Two and a Half Minutes to Midnight, Thanks to Trump https://t.co/yboK3r52ZT @Sierra_Magazine @EUEnvironment

Of the 50 on the list, Atlantic Coast is surprisingly the only pipeline project named. Some had suspected Trump’s infrastructure promise would serve as a massive pipeline giveaway. So, why prioritize this one?

A possible answer: Several members of Trump’s transition team, landing team and current White House operation have connections to companies behind the project or to firms lobbying for it.

The Atlantic Coast pipeline has been proposed by a partnership among Dominion Resources, Duke Energy and Southern Gas Company.

The natural gas pipeline, currently under review by the Federal Energy Regulatory Commission (FERC), has faced staunch opposition from environmental activists and residents along its 550-mile-long path stretching from West Virginia through Virginia to North Carolina. It will carry natural gas obtained via hydraulic fracturing (“fracking“).

Among other things, detractors argue that the pipeline will have adverse effects on sensitive habitats, reduce property values and introduce dangerous precedents for the seizure of private property through eminent domain.

https://twitter.com/EcoWatch/status/825482382509801473, would be funded, how the federal government prioritized these projects or any timeline for completion.”

DeSmog research has revealed that a few Trump associates could benefit financially if this prioritized pipeline opens for business.

One is Dan DiMicco, who served as a senior economic adviser to Trump’s campaign and led the new administration’s U.S.Trade Representative transition team. He also sits on the Board of Directors of Duke Energy, one of the pipeline project co-owners.

Another tie can be seen between Trump presidential campaign adviser, U.S. Rep. Richard Hudson (R-NC) and his former chief-of-staff Pepper Natonski. Since at least January 2016, Natonski has been lobbying on behalf of Duke and its stake in “natural gas utilities regarding pipeline safety legislation and any regulatory regime affecting natural gas utilities” and serves as director of Federal Affairs for the company, according to Politico Influence.

In its Resource Report submitted to FERC, Atlantic Coast pipeline lists Natonski among the stakeholders it contacted to educate about the project. The company says it met with Hudson or his staff on five different instances and also had seven different pipeline-centric email interactions. Today, this rising influencer among DC political circles is lobbying Congress on behalf of one of the project’s owners. 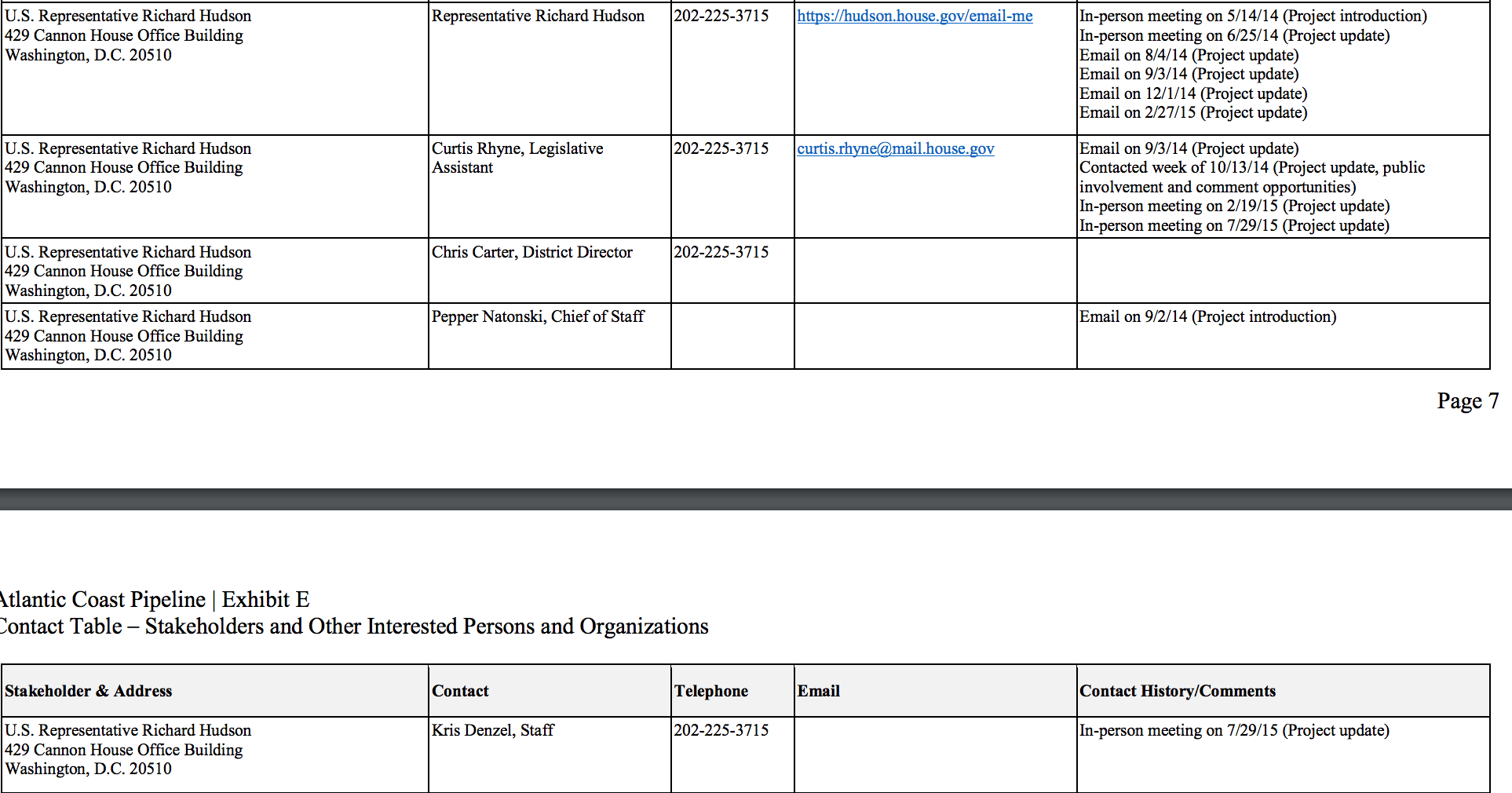 Yet another connection between the Atlantic Coast project and the Trump White House is Rosario Palmieri, who lobbies on behalf of the pipeline for the National Association of Manufacturers. He formerly worked as a staffer for Vice President Mike Pence when he served in the House of Representatives.

Dominion appears excited to have been included on the list of Trump’s top infrastructure projects.

“We’re very encouraged by the Trump administration’s strong commitment to rebuilding the nation’s energy infrastructure,” Aaron Ruby, a spokesperson for Dominion Resources, said of his company’s inclusion on the list for Atlantic Coast. “This administration has taken some important first steps to clear the path for critically important projects and we’re eager to work with the president to ensure that projects like the Atlantic Coast Pipeline are approved and built in a timely manner.”

On the list of priority infrastructure projects, the Trump team claims Atlantic Coast could create 10,000 jobs. By way of comparison, Keystone XL—which is about twice the length as Atlantic Coast—will create 2,500–4,650 construction jobs, according to a report published by Cornell Unversity’s Global Labor Institute. As the Kansas City Star pointed out, there is little information to back up the claims made in the leaked document at this point.