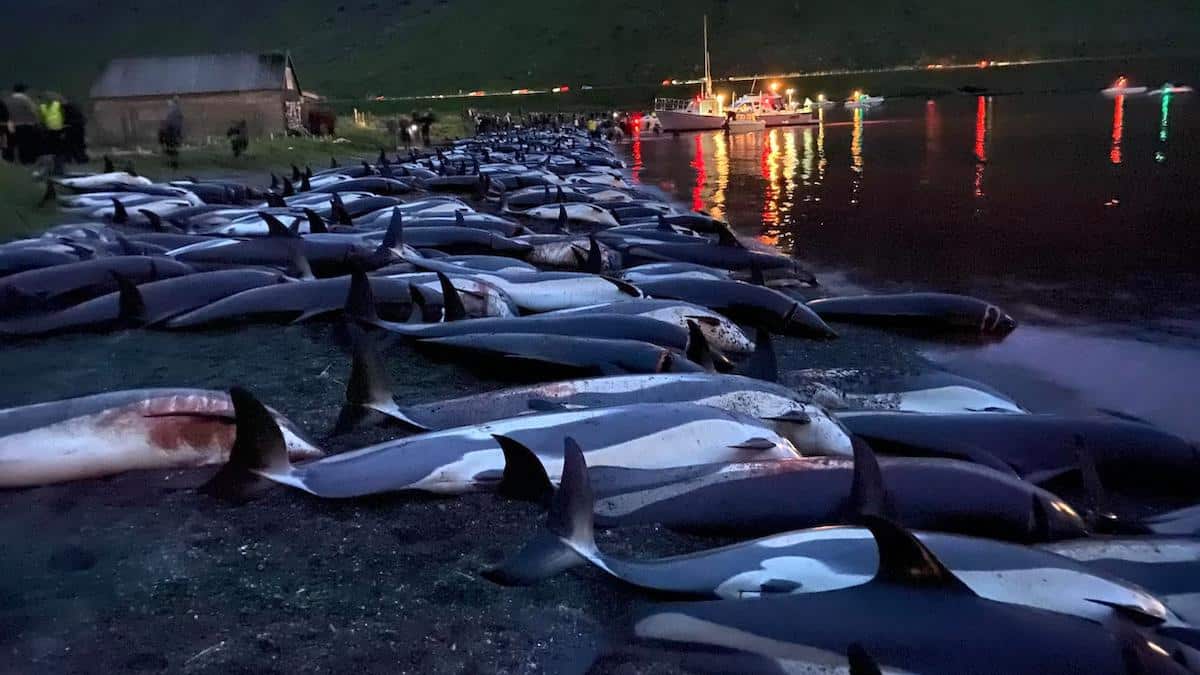 The slaughter of a record 1,428 dolphins in the Faroe Islands is prompting outrage from environmental organizations and even local residents.

Sea Shepherd announced that the killings took place the night of Sunday, September 12 and amounted to the largest single hunt of whales or dolphins in Faroese history.

“For such a hunt to take place in 2021 in a very wealthy European island community just 230 miles from the UK with no need or use for such a vast quantity of contaminated meat is outrageous,” Sea Shepherd UK COO Rob Read said in a statement.

On Sunday night a super-pod of 1428 Atlantic White-Sided Dolphins was driven for many hours and for around 45 km by speed boats and jet-skis into the shallow water at Skálabotnur beach in the Danish Faroe Islands, where every single one of them was killed. https://t.co/uo2fAPhCDq

The incident is part of a Faroe Islands tradition known as the Grind, in which marine mammals, particularly whales, are hunted, BBC News explained. Supporters say it is sustainable and an important part of the cultural heritage of the autonomous Danish territory. Opponents, on the other hand, argue that it is unnecessarily cruel to the animals hunted.

Sunday’s hunt, however, was exceptional for several reasons. Faroese marine biologist Bjarni Mikkelsen agreed with Sea Shepherd that it was a record hunt. The previous record was set in 1940, when 1,200 animals were killed. In general, government figures say that an average of 600 pilot whales a year are caught, but the number of dolphins is usually much lower. It stood at 35 in 2020 and 10 in 2019.

By contrast, Sunday’s hunt saw a pod of nearly 1,500 white-sided dolphins driven by motor boats and jet skis for several hours into Skálabotnur beach, where every one of them was killed, Sea Shepherd reported.

The exceptional numbers and cruelty of the incident sparked outrage among locals as well as activists. One lamented the waste to Danish newspaper Ekstra Bladet, according to Sea Shepherd.

“My guess is that most of the dolphins will be thrown in the trash or in a hole in the ground,” said one.

Even proponents of the tradition said Sunday’s killings were a mistake.

“I’m appalled at what happened,” Heri Petersen, who chairs the hunting association where the incident occured, told the local In.fo news site, as The Guardian reported. “The dolphins lay on the beach writhing for far too long before they were killed.”

A poll taken after the killings suggest that most people on the islands want the dolphin killings to end.

“We did a quick poll yesterday asking whether we should continue to kill these dolphins. Just over 50% said no, and just over 30% said yes,” Trondur Olsen, a journalist for Faroese public broadcaster Kringvarp Foroya, told BBC News.

However, 80 percent of respondents to a different survey said they wanted to continue the Grind for pilot whales.