Does 'Powering Forward' Advise Obama to Frack Our Way to a Clean Energy Economy? 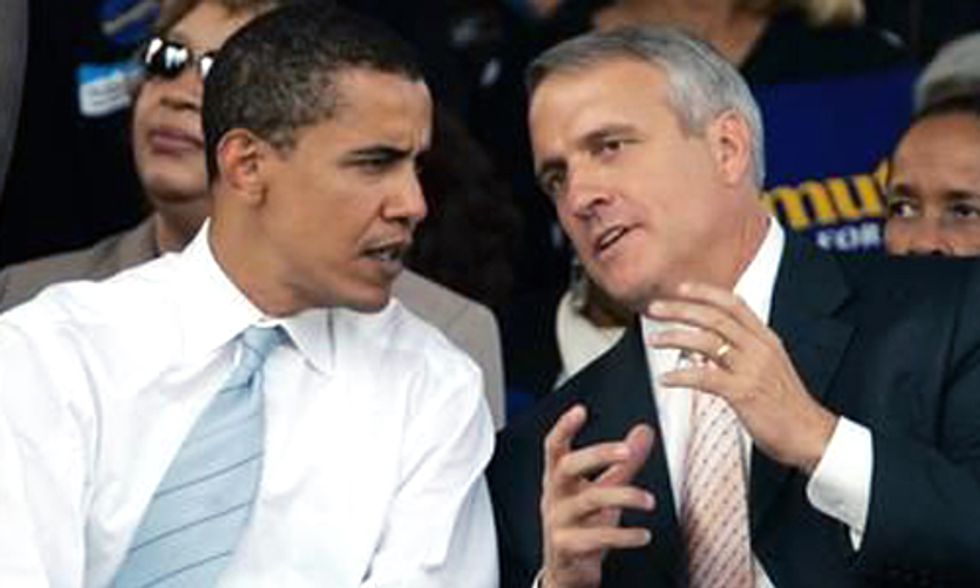 In a new 203-page report, Powering Forward: Presidential and Executive Agency Actions to Drive Clean Energy in America, former Democratic Gov. of Colorado Bill Ritter has published his recommendations to President Obama for how to transform our nation into a “clean energy economy” and fight climate change.

Ritter, who heads the Center for the New Energy Economy at Colorado State University in Fort Collins, and his colleagues interviewed scores of business leaders, industry professionals and other energy “thought leaders” to come up with the recommendations that were splashed across the media today.

The report is chock full of extraordinary advice to Obama on many non-natural-gas topics related to clean energy (all too numerous to mention here), but unfortunately the major underpinning of the report is still using natural gas as a “transition fuel to a clean energy economy” (read page 87 of the reprot). The most illuminating graph in the whole report is on page 46 where it shows the clear and remarkable trend in the U.S. away from coal and towards natural gas for our energy supply.

Ritter, of course, knows this trend well—it was a key talking point for his 2006 successful run for Governor, and during his only term he championed a “fuel switching” policy which closed down Colorado coal plants and replaced them with natural gas.

A few years later, however, the oil and gas fracking boom across the Denver to Fort Collins Front Range of Colorado has lit off a firestorm of public controversy causing five cities (representing more than 400,000 citizens) to essentially ban fracking and putting Ritter’s policies (and his successor, Gov. John Hickenlooper’s) in the crosshairs of the public conflict.

In the report, Ritter sadly and unfortunately doubles-down on natural gas fracking:

And on page 89, the report discusses the “Benefits” of natural gas fracking—a page of information that is simply not true. In fact in Colorado, our air is worse, our health is worse, our gas prices have not dropped dramatically, not enough new jobs have been created to ever justify the exploitation of health and environment, our communities are overrun with fracking impacts, climate change emissions are increasing and the problems with using/wasting/disposing of billions of gallons of toxic water are getting worse and worse.

And even more unfortunately, Ritter buys into the “rhetoric argument”—i.e., that the problem with fracking is that we environmentalists just don’t understand and aren’t educated.

On page 87, the report states:

A key recommendation that emerged from the CNEE stakeholder consultation on natural gas production—perhaps THE key recommendation—had less to do with the public policy and more to do with public discourse. It was the need to build greater trust and a sense of joint mission among government, the natural gas industry, the environmental community, other public-interest stakeholders and the general public.

Seventeen pages of the report are dedicated to “Robust and Responsible Natural Gas Production,” and many other pages and chapters point to how natural gas can help fight climate change. The report also—and perhaps hopefully—tries to point out that we need a “zero emissions policy” on methane leaks so as to address one of the problems with increased climate change emissions from natural gas.

But ultimately this report is underpinned by just more frackaholics from a growing and unsettling trend in frackademia. For god’s sakes, even British Petroleum has now stated that oil and gas fracking will increase climate change emissions, not decrease it. Further yet, the report repeats the now weary statements about how gas fracking will make the U.S. “energy independent,” when in fact the opposite is true.

What we’ve really found in Colorado is that we citizens are now nearly 100 percent dependent on global, predatory, fossil fuel corporations that are hell-bent on destroying our air, water and climate. In fact, during the November 2013 elections—in which I was involved, and in which four cities essentially banned fracking—I was stunned at how the oil and gas industry would pretty much say and do anything to anybody as well as spend nearly $1 million to try and ram cancer-causing fracking chemicals down our throats. Twenty thousand new wells are predicted to be drilled and fracked along the suburban areas of Colorado (adding to the 25,000 already here)—anyone who thinks that is a good idea is completely out of touch or being paid by the oil and gas industry.

Ritter’s report contains a trove of good information on topics unrelated to oil and gas fracking, and if he would have just left out the frackaholism, the report would have been an exceptional step forward. But here’s the real fact about clean energy that former Gov. Ritter should have said:  Obama needs to pull our nation's head out of the sand and quit looking for fossil fuels underground, and instead raise our faces to the sky and that shining orb of real, clean energy—the sun.