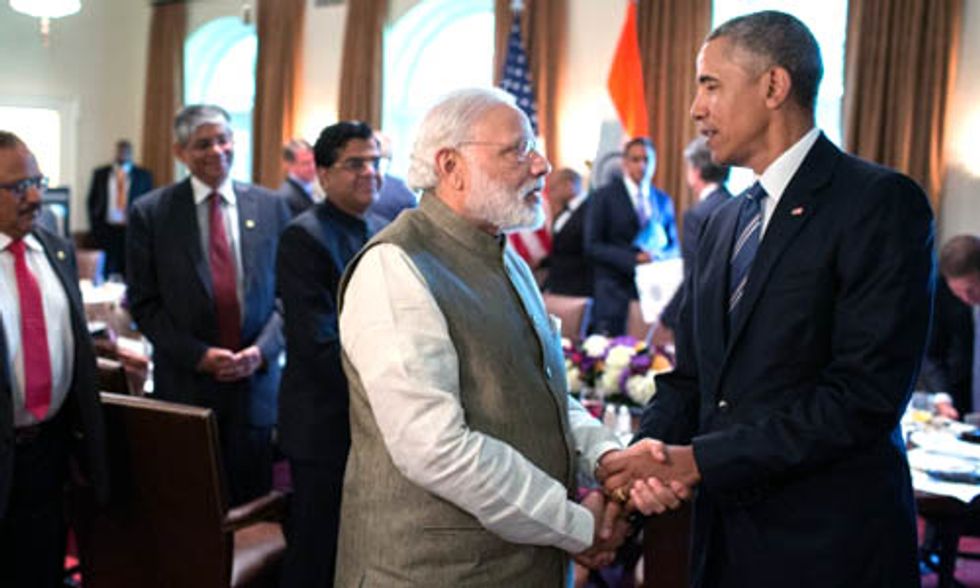 The ground-breaking announcement Tuesday that India, the U.S. and a group of U.S. foundations have joined together to create two innovative financing mechanisms for rooftop and distributed solar power in India is emblematic of the new stage of the ongoing global energy transformation.

It's exciting enough that energy access for the poor—which has been treated as a second thought for decades—is now at the top of the U.S./India diplomatic agenda, and that in partnership with U.S. foundations funding has been committed which will leverage up to $1 billion in investment. But this announcement also caps the opening round of a period in which emphasis on technology will be replaced by collaborations around business models, finance and the regulatory context. (The U.S. and India also agreed to jointly support amendments to the Montreal Protocol which will phase out the single most potent global warming pollutant, HFC refrigerants. One of the six major greenhouse gases is now on the way out. Five more to go).

Each year for 60 days' clean energy and climate advocates and innovators gather in a series of forums to assess the state of their movement and market. This “Season" (punctuated by fossil fuel gatherings like the June OPEC meetings) begins with the early April Bloomberg New Energy Finance (BNEF) forum in New York and ends with the June Clean Energy Ministerials hosted by major governments, this year in San Francisco. (Other major U.S. talk-fests in the 2016 season were the World Energy Innovation Forum, Climate Action 2016 and the Aspire Forum).

This new phase has four markers:

It took a year of intensive lobbying of the White House to get President Obama, in his January State of the Union message, to concede forthrightly that clean energy was now cheaper than fossil fuels. At this week's global Clean Energy Ministerial in San Francisco Energy Secretary Moniz boasted that while climate change had motivated investment in clean energy, the price advantage now made that revolution “inevitable," only to be trumped by Southern Company CEO Tom Fanning, leading one of America's most coal dependent utilities: “You can't keep the waves off the beach."

What drives this? Recent, unsubsidized, prices for solar in Abu Dhabi at 2.9 cents/kwh and wind in Morocco at 3.0 cents.

BNEF's Michael Liebrich launched the season with a keynote which highlighted that growth in clean energy investment had been undeterred by the collapse in coal and oil prices, and that investment in renewables for the first time exceeded the oil industry's historically sector-dominant exploration and development budget.

At ASPIRE, retiring U.S. Climate Envoy Todd Stern summed up Paris by saying, “It sets a vector. Things are going in one direction—towards a low carbon economy." Fatih Biroh of the International Energy Agency focused on the breakthrough that for two years' energy related CO2 emissions had remained flat while GDP kept increasing at 3 percent—carbon and prosperity, he said, are now decoupled.

While everyone emphasized that more innovation was needed, the conversation was strikingly unfocused on the details of making this happen. Bill Gates's cry that we need “an energy revolution" because the present trajectory will not get us the clean energy required got almost no traction. Liebrich openly mocked it, while Stern diplomatically praised the newly crafted Solar Alliance led by the Government of India as an important first step towards Gates's goal. Energy innovation was no longer a challenge, but an inevitability. Former ARPA-E Director Arun Majumdar led an ASPIRE panel featuring policy voices not engineers.

3. The twilight of fossil fuels

Fossil fuels are now seen as a fading, but still dangerous incumbent. At the Climate Action Summit UN Secretary General Ban Ki Moon warned that progress has not yet reached the critical speed needed to meet global climate goals. At the Energy Innovation Forum Elon Musk shifted his focus from the superiority of electric vehicles to warning that the enormous subsidies lavished on coal and oil could still block cleaner, cheaper technologies. Musk called for a “global revolt" against these subsidies. The G7 at their Tokyo Summit instead set a stunningly lethargic date for phasing out those subsidies—2025.

But the stark implications of increasingly dominant clean energy received more and more thoughtful attention from fossil fuel stakeholders. (And 40 percent of ExxonMobil's shareholders, if none of its managers.) The Saudi Government resolutely refused to embrace a goal of $100 oil through production limits, recognizing that this would simply accelerate the end of oil's dominance in transportation. A draft report prepared for Canadian government concluded demand for oil could fall so fast that producers simply dump their barrels on to a shrinking market, leaving high cost oil like Canada's, along with pipelines and other facilities, stranded. For a major oil producer to face a world where its reserves will fetch a price of “$0" would have been shocking a year ago. But in Calgary oil analyst Paul Sankey lectured the industry: “Demand forecasts are way too positive … really, the essence of the opportunity for oil is to be dividend stocks to pay out. Not to attempt to grow, but actually to orderly liquidate."

Back to my opening, it was startling that one of the major announcements made by the governments of the UN and India yesterday while Narendra Modi was in Washington had to do with the creation of two new credit facilities, both designed to serve companies developing distributed solar projects.

If the $60 million pledged leverages additional private investment of $300-600 million these funds, matched with the $1.5 billion advanced to India's banks by the World and Asian Development banks could jump start India's rooftop solar revolution, and provide electricity to hundreds of millions who currently lack it. Excellent work.

But the focus on this innovative but relatively small piece of financial architecture also underscores the failure since Paris to move forward on credit arrangement that would unlock the $3 trillion that developing nations will need to meet their pledges by 2030—and those pledges, in turn, get the world no more than 50 percent of the way to decarbonizing its economy.

More stunning, the total need for urban infrastructure by 2030 will be $90 trillion. The money is there—investors, companies and banks are awash in funds seeking good, long term investments. The demand is there—global urbanization, the climate crisis and the energy transformation make this the perfect moment for massive investment.

But the big lie—that the world economy is overleveraged—blocks action. That lie led Europe to adopt “austerity" (a non-solution) after its economic collapse. In the U.S. it has blocked funding for desperately needed infrastructure like bridges and the grid, projects that bring together the Chamber of Commerce and the AFL-CIO—but not Republicans in Congress. And now its echo leads the industrial nations to veto financial innovation which could transform a halting, sporadic and painful transition from fossil fuels into a moment of dynamic excitement and growth.

Climate denial is still a threat and a problem—particularly in the politics of the U.S. But the ace in the whole that the coal and oil industry still hold, and that may enable them to cripple the growth in clean energy for 20 or 30 years, is the reluctance of wealthy industrial nations to recognize that this is a time to invest in—not strangle—the future.