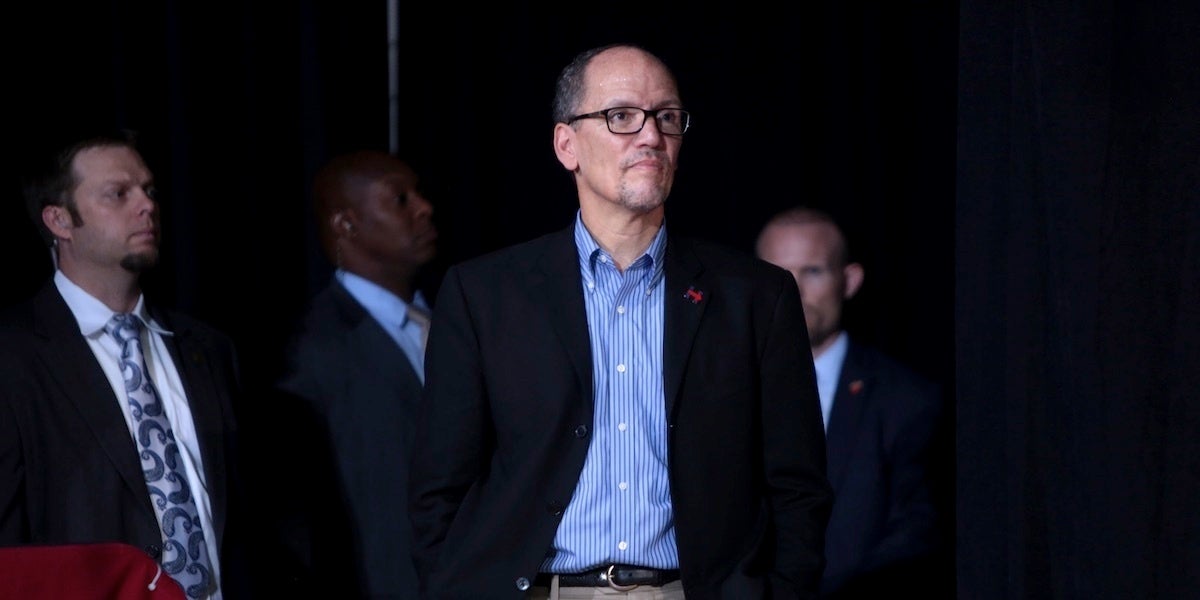 That was fast. Just two months after the Democratic National Committee (DNC)
unanimously prohibited donations from fossil fuel companies, the DNC voted 30-2 on Friday on a resolution that critics say effectively reverses the ban, The Huffington Post reported.

The
resolution, introduced by DNC Chair Tom Perez, allows the committee to accept donations from “workers, including those in energy and related industries, who organize and donate to Democratic candidates individually or through their unions’ or employers’ political action committees” or PACs.

It conflicts with the
original resolution that called on the committee to “reject corporate PAC contributions from the fossil fuel industry that conflict with our DNC Platform.”

In a conference call after the vote, Perez said that members of the labor community considered the original resolution passed in June “an attack on the working people in these industries,” per
The Hill.

He insisted that the DNC is still committed to the Democratic Party platform, “which states unequivocally our support for combating climate change.”

To be clear —> @DNC staff and officers NEVER consulted me on language to reverse my resolution banning corporate fossil fuel PAC money and now said they have to keep the resolution as is because of all the work *we* did. 4 Yes votes; 28 No votes so my motion to ban PAC $ fails.

Pelosi proposed an amendment Friday that would remove the words “employers’ political action committees” but the motion failed 4-28.

A DNC spokeswoman disputed accusations that the committee is backtracking on its earlier resolution, telling HuffPo it’s “not a reversal” and that “any review of our current donations reflects” the Democrats’ “commitment” to no longer take money from the fossil fuel industry. The spokeswoman offered no further comment.

Jerald Lentini, deputy director of the Democratic fundraising group
It Starts Today, explained to HuffPo that the new proposal may only apply to Democratic campaigns, meaning it does not fully annul the first resolution. However, as Lentini noted, it would still “repudiate the spirit” of it.

“Why in the age of Trump, wildfires, and eminent domain for private gain are we using land gauge and stances of the GOP? Many of us will fight this at DNC meeting in August,”
Bold Nebraska founder and Nebraska Democratic Party Chair Jane Fleming Kleeb tweeted.

New York gubernatorial candidate Cynthia Nixon, who has sworn off any corporate donations and has joined hundreds of politicians that have signed the
No Fossil Fuel Money Pledge, had a similar sentiment: “You can’t do right when you’re getting donations from companies that do wrong.”

You can't do right when you're getting donations from companies that do wrong. https://t.co/OOa1WMQazt

“Honestly, these people are bound and determined to deflate and demobilize their base,” tweeted author and activist Naomi Klein.

What’s more, the text of the new resolution embraces an “all-of-the-above energy economy” that includes clean and low-emissions energy technology, “from renewables to carbon capture and storage to advanced nuclear technology.”

350.org co-founder Bill McKibben criticized the measure and noted that the “new DNC proposal would support an ‘all of the above’ energy policy which the last party platform explicitly rejects. This is a bad idea, on both scientific and political grounds.”

In 2016, the Democratic National Committee
axed its support for an “all-of-the-above” energy policy and calls for having the nation run “entirely on clean energy by midcentury.”