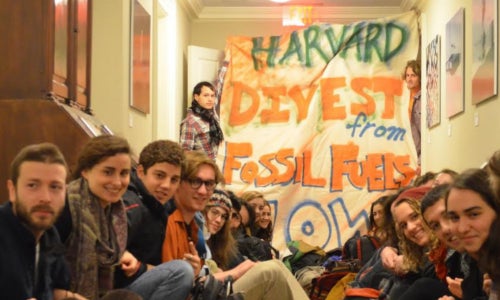 Student movements urging their colleges and universities to divest their endowments from investments in fossil fuels have been spreading across the U.S. and abroad. Hampshire College in Massachusetts, Vermont’s Goddard University, University of Maine system, University of Dayton (Ohio), the University of Glasgow (UK) and Stanford University are among the more than two dozen that have taken the step.

Harvard University has the richest endowment of any educational institution in the world, with an estimated $32.7 billion. There, the two-and-a-half-year old movement Divest Harvard has been growing more vocal and aggressive. The students have had the support of many faculty, 93 of whom signed an open letter last spring calling on the school to divest.

But Harvard not only stood firm against the pressure, it has pushed back, making a major recommitment to fossil fuels, while attempting to marginalize the student protesters. A peaceful 24-hour sit-in last week at the school’s Massachusetts Hall by 34 members of Divest Harvard finally evoked a response from an administration that Divest Harvard says “avoids engagement with student activism at all costs.”

“We began our sit-in in the hopes that we could bring our voices and urgency directly to the doorstop of President [Drew Gilpin] Faust,” said the students. “It worked: by mid-morning, she was compelled to response—a first in our experience with the administration. Yet despite that minor victory, her words made it clear she had no sincere interest in working with us. Instead, she issued an ultimatum that was intended to cut short our direct action, and she called our presence and our passion ‘coercive’. The statements of the university also fundamentally misunderstand the role of all nonviolent direct action. The imbalanced power dynamic of this institution, one that has consistently relegated many student voices to the margins, mandates disruptive action.”

In addition to a contemptuous attitude toward the students whose actions were dubbed “disrespectful and coercive interference with the activities of others” in the administration email, the school mocked their efforts by dramatically increasing its investment in fossil fuels. According to The Guardian, Harvard increased its oil and gas holding sevenfold in the third quarter of 2014 for a total of nearly $80 million. Its biggest investment—$57.4 million—was in Anadarko Petroleum, which was involved in the Deepwater Horizon oil spill of 2010 which befouled the Gulf of Mexico and continues to have negative impacts on its ecosystem and that of the surrounding coasts.

In the face of the administration’s intransigence, seven undergraduates and law students who are part of the Divest Harvard movement filed a lawsuit last November claiming that as a public nonprofit, the university has a responsibility to fight climate change and protect future generations by dumping its fossil fuel investments. On Friday, Harvard lawyers will appear in court asking to have the case dismissed.

Gilpin justified the university’s stance in a 2013 letter posted to the Harvard website, saying “Conceiving of the endowment not as an economic resource, but as a tool to inject the university into the political process or as a lever to exert economic pressure for social purposes, can entail serious risks to the independence of the academic enterprise. The endowment is a resource, not an instrument to impel social or political change.”

In the letter, she suggested divestment would be pointless since others would pick up the shares they sold, that it would be hypocritical since the university relied on services from the companies whose shares they would sell, and that it could better address climate change through ongoing research and teaching about climate change. 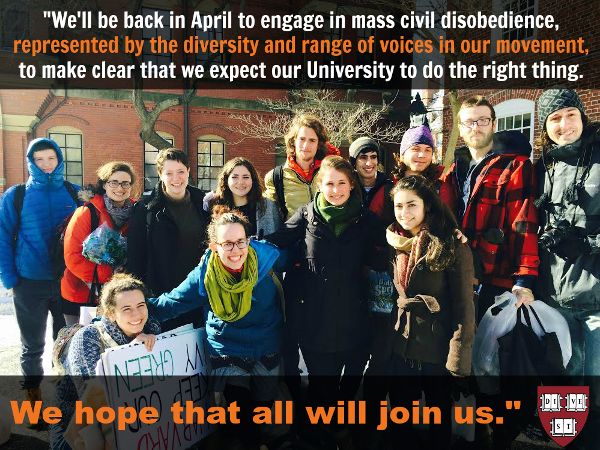 Harvard students have been joined by faculty, staff and alumni in urging the university to divest from fossil fuels and protect the climate Photo credit: Divest Harvard

The students participating in the sit-in expressed a full awareness of their privilege and their feeling that they were compelled to use that privilege for the greater good.

“As we sit here peacefully settled into our action with the well-being of the planet and people everywhere constantly in mind, we realize the privilege of our situation of protest,” they posted during the sit-in. “In this comfortably carpeted hallway, outside the office of the president of one of the world’s most respected educational institutions, we face little risk of bodily harm from the police and possible disciplinary repercussions pale in comparison to risks other protestors have faced and continue to face on this campus, in this city, in this country and all over the world. We feel this privilege only heightens the need to leverage our position as best we can.”

They felt upbeat that they had accomplished something with the sit-in despite the administration’s refusal to meet with them.

“We saw incredible pressure pouring in on the administration; we brought the issue to the limelight again,” Harvard sophomore Talia K. Rothstein, a Divest Harvard coordinator, told the Harvard Crimson. “We’ve found that we really made our voices heard.”