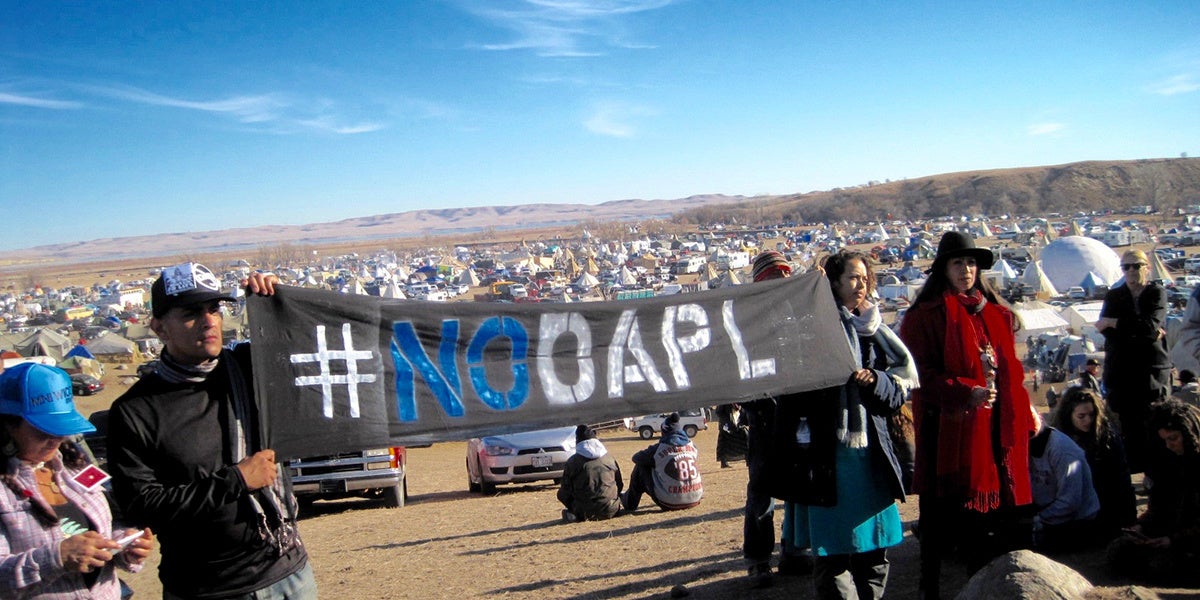 Despite shifts in the terrain of struggle, the courageous and determined Water Protectors of the movement to stop the Dakota Access Pipeline (DAPL) continue to stand strong, gain momentum and mobilize in diverse and effective ways in their work to protect Indigenous rights, water and life in North Dakota and beyond.

From powerful Indigenous and frontline leadership at the 200,000 strong People’s Climate March in Washington DC, to ceaseless advocacy and actions in courtrooms, in the streets, in the halls of government, and in the offices of financial institutions that support exploitation and extraction—the DAPL resistance continues, while also joining together with other communities to face mounting pipeline struggles including Kinder Morgan’s Trans Mountain, Enbridge’s Line 3, TransCanada’s Energy East, Sonoco Logistic’s Bayou Bridge, the resurrection of TransCanada’s Keystone XL and efforts to stop fossil fuel extraction at the source.

Over the past months, Water Protectors from various Indigenous nations across the U.S. have made waves while traveling to seven European countries for The Stand Up for Standing Rock Tour; have opened the L’eau Est La Vie (Water is Life) Camp in South Louisiana to stop the Bayou Bridge pipeline (the southern end of DAPL); and have helped organize, through the International Indigenous Youth Council, an 80 mile run across Northern New Mexico in opposition to growing fracking in the Chaco Canyon region; amongst many other diverse and powerful actions.

Indigenous organizations including Honor the Earth and the Indigenous Environmental Network, who have successfully fought fossil fuel developments projects for years, continue to advocate, take action, and help open platforms for the voices of the NoDAPL and other pipeline resistance movements to be heard.

The Indigenous-led Mazaska Talks coalition has also been formed, joining the 121 First Nations and Tribes of the Treaty Alliance Against Tar Sands Expansion in demanding banks divest from the companies building Dakota Access and proposed tar sands pipelines.

Many other allied groups are organizing around fossil fuel divestment and actions are underway, with Defund DAPL reporting that, thus far, more than $82 million dollars by individuals and more than $4 trillion dollars by cities and tribes have been removed from the financial institutions connected to DAPL.

On June 14, there was a critical victory when, as part of the lengthy legal battle being led by the Standing Rock Sioux Tribe, a U.S. federal court from the District of Columbia agreed that the Army Corp of Engineers failed to consider the National Environmental Protection Act and off reservation treaty rights in DAPL’s permitting process. 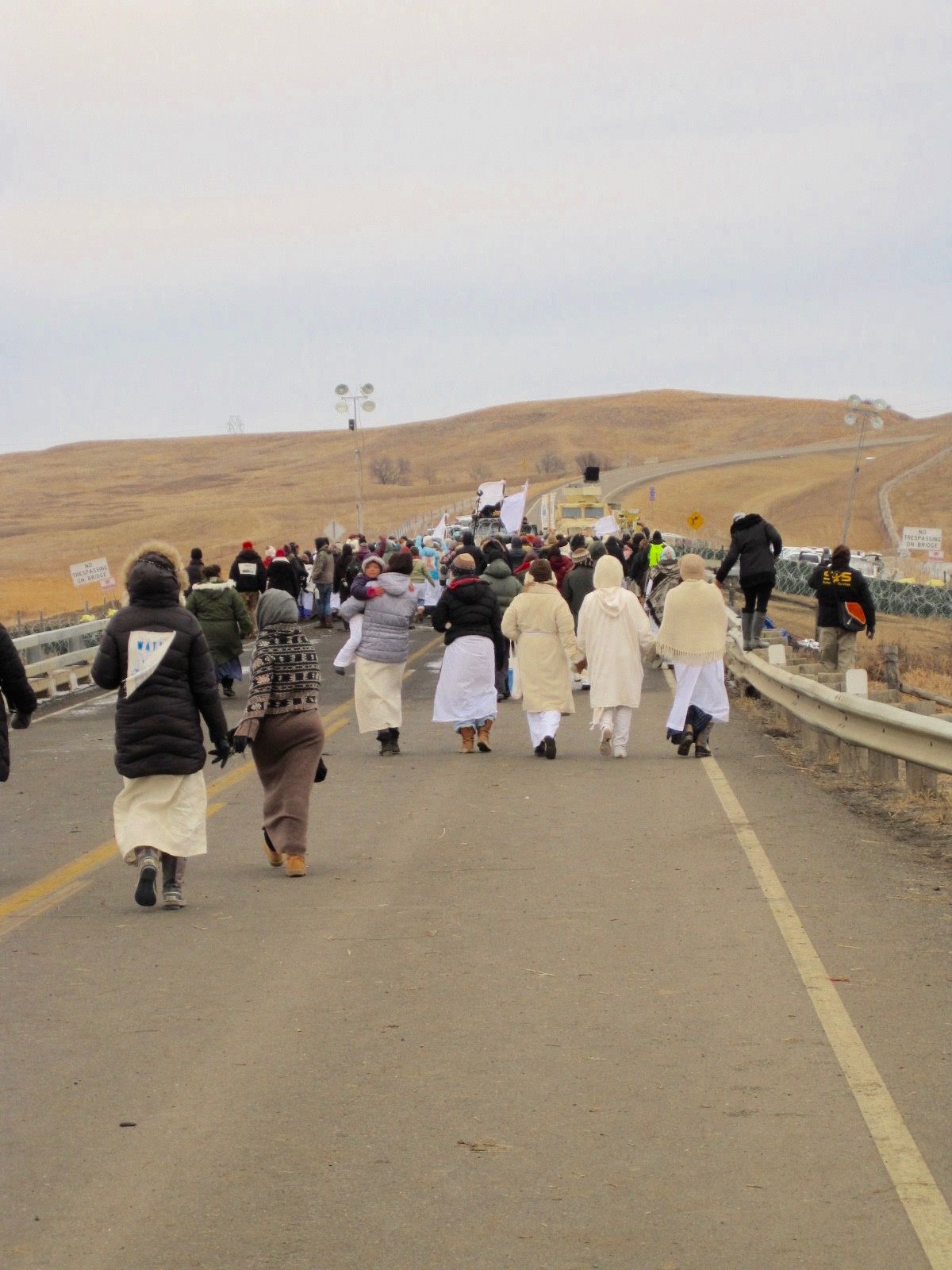 In May 2017, leaked information from The Intercept helped expose counter-terrorism tactics used by DAPL’s private security firm Tiger Swan to aggressively suppress Indigenous peoples and their allies in Standing Rock, North Dakota as they exercised their human rights.

Significantly, all of this momentum has taken place in the face of a climate change denying Trump administration determined to drive forward pipelines such as DAPL through an expansion of a government that caters to fossil fuel corporations, and the banks and financial institutions that support them.

As part of the multifaceted pipeline resistance and divestment effort, earlier this year an Indigenous Women’s Divestment Delegation traveled to Norway and Switzerland to meet face to face with bank representatives from financial institutions invested in DAPL and parent company, Energy Transfer Partners. Facilitated by the Women’s Earth and Climate Action Network, the delegation was initiated by grassroots Indigenous women who were harmed by and/or observed human rights and Indigenous rights abuses in North Dakota, and through the subsequent and continued persecution of Water Protectors.

In Norway, the advocacy of the Indigenous Women’s Divestment Delegation helped push DNB bank to sell their $331 million dollar credit line to DAPL, following strong advocacy efforts from many groups, and an independent investigation in which DNB affirmed the violation of Indigenous rights and failure to properly consult the Standing Rock Sioux Tribe. 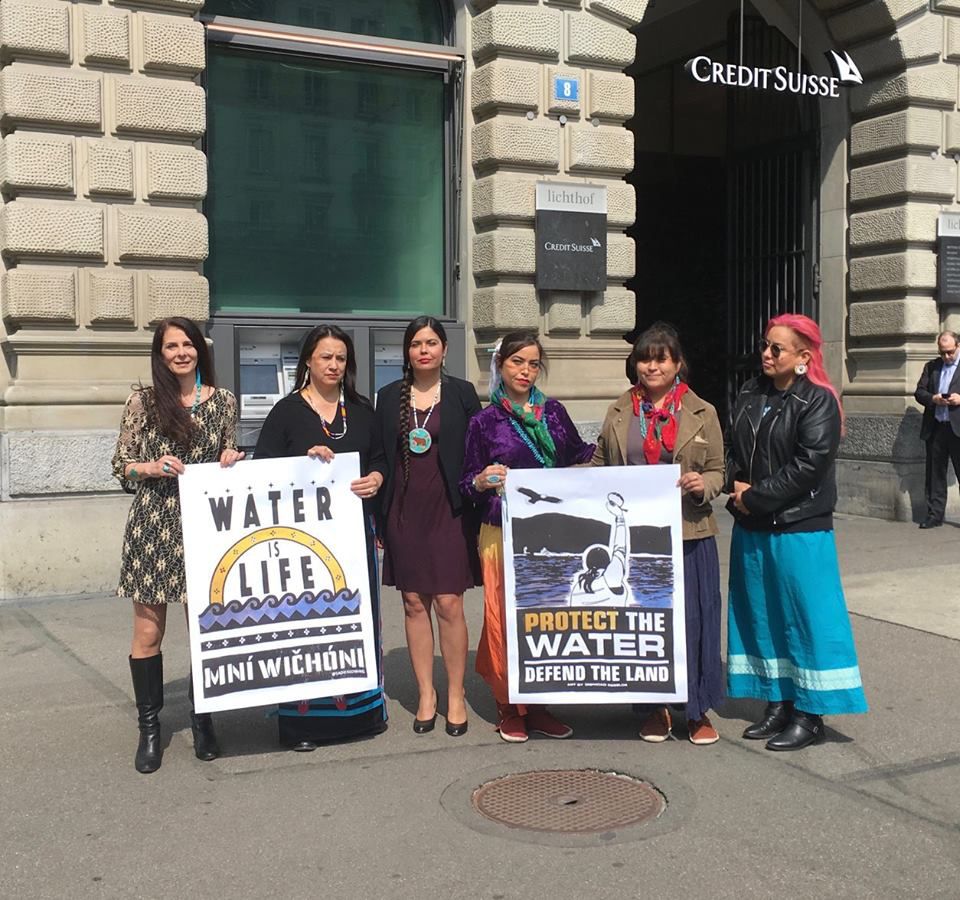 As follow up to intensive meetings with Credit Suisse bank representatives in Switzerland, a detailed letter has recently been sent to the bank clarifying exactly why they must immediately divest from DAPL related companies; offering an in-depth analysis of the rights violations that occurred at Standing Rock; and demanding from Credit Suisse corporate responsibility and accountability to its human rights policy.

The letter also analyzes and provides examples of the U.S. legal system’s failure to protect, secure and guarantee human rights such as self-determination and Free, Prior and Informed Consent to Indigenous peoples, ultimately providing a stark picture of how resource wars against Indian people in their traditional homelands and territories continue in the U.S. to this day.

As the letter to Credit Suisse points out, the financial institution’s continued banking relationship with Energy Transfer Partners, and the stated “provision of loans, the issuing of securities (notes) and advisory mandates” violates the bank’s current policies and guidelines in regard to human rights and indigenous rights relating to:

The letter concludes as follows:

“Credit Suisse has stated that, ‘Credit Suisse takes concerns about the DAPL seriously and will consider them in the further development of internal guidelines.’ However, if Credit Suisse took human rights and indigenous rights abuses seriously they would have already complied with, and implemented their current human rights policy and publicly withdraw its credit facilities and end its banking relationship with the Energy Transfer Family of Partnerships. Credit Suisse needs to show that its commitment to sustainability and human rights is more than mere lip service, obscuring complicity and contribution to human rights, environmental rights, and indigenous rights abuses in the United States.”

Divestment advocates worldwide are turning to financial institutions like Credit Suisse and calling for accountability such as the letter demands. In this vein, the Indigenous Women’s Divestment Delegation to Norway and Switzerland helps expose the complex interplay and interdependency between states, corporations and banks in the harmful extraction and exploitation of natural resources of Indigenous peoples’ territories and lands.

Indigenous women and their allies are illuminating the deleterious but key role banks play in maintaining the unjust design of a fossil fuel economy detrimental to their survival, and are working to stop the pipelines at the financial source. Their quest for justice and accountability from banks for human rights violations is imperative not only to Indigenous peoples and Nations, but to American citizens and global civil society.

The aim is not only divestment, but also economic paradigm shifts that include investments in renewable energy technology, sustainability, and just, transparent, and accountable banking institutions; economic systems that are not detrimental to Indigenous peoples rights or the environment.

Through the ongoing efforts of Water Protectors, the Standing Rock movement continues to shine a fierce light on the historic and contemporary indigenous rights and human rights violations occurring at the hands of state and corporate actors, and has made it clear once again that the transition to a just and dignified future must be one that upholds human rights, sustainable renewable energy, climate justice, and respect for indigenous peoples self-determination. The torch and spirit of the movement for water, life and rights will continue as people’s movements around the world seek justice, truth, accountability and transformation.

Michelle Cook is a Dineh (Navajo) human rights lawyer and a current SJD candidate at the University of Arizona’s Indigenous Peoples Law and Policy Program.

Osprey Orielle Lake is the Founder and Executive Director of the Women’s Earth and Climate Action Network (WECAN) International.