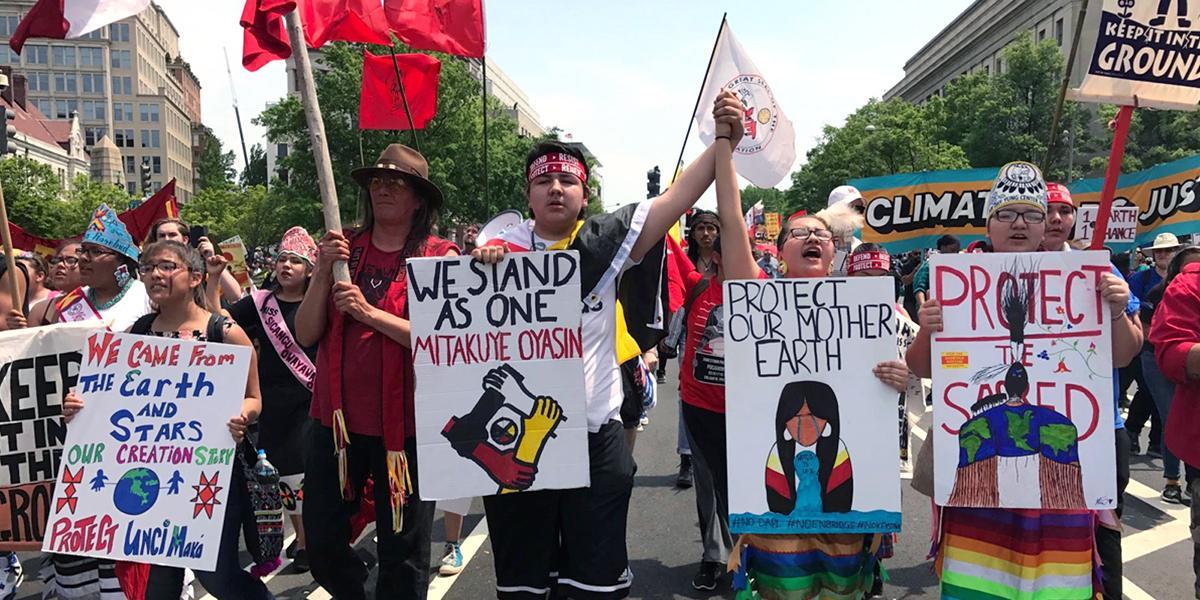 In the U.S., more than 370 marches in nearly all 50 states took place, from the town of Dutch Harbor in Alaska’s Aleutian Islands to the streets of Miami, Denver, Los Angeles, Chicago and other major American cities.

EcoWatch was there covering the DC march, and interviewing climate experts and marchers from all over the nation. Watch our more than five hours of coverage here:

The Peoples Climate March was led by a coalition of frontline communities, faith leaders, labor activists, civil rights champions and climate justice advocates demanding commonsense protections for the air we breathe, the water we drink and the health of the vulnerable communities who have the most to lose under President Trump’s administration.

“The sight of more than 150,000 people taking to the streets of Washington, DC, not to mention the thousands more in cities and towns across the country, displays the true power of the climate movement,” Sierra Club Executive Director Michael Brune said. “We cannot nor will not be stopped. We will speak out, we will take to the streets and we will win.

“Donald Trump can try to stick his head in the sand when it comes to protecting our clean air and water all he wants, but that will never drown out the millions of voices across the country demanding action.”

According to 350.org, the number of people far outpaced the National Park Service’s permitted space of 100,000 people. The march extended for more than 20 blocks down Pennsylvania Ave., with tens of thousands more surging along the mall sending a unified message to President Trump and his administration to stand up for “climate, jobs and justice.” 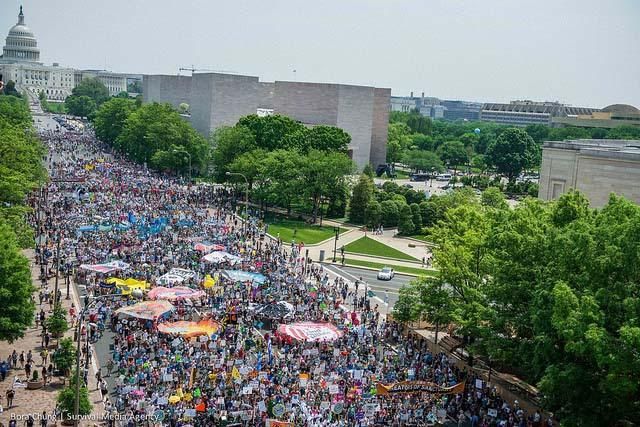 The day began at sunrise with a water ceremony led by Indigenous peoples at the Capitol Reflecting Pool. Representatives from front line communities spoke at an opening press conference calling out President Trump for failing to address the climate crisis.

The march, which began at 12:30 p.m. EST, was led by young people of color from Washington, DC, and Indigenous leaders from across the country.

“Today we gather to see each other, to work with each other, to embrace each other and to envision a just and clean future together, one without fossil fuels,” Mary Nicol, senior campaigner at Greenpeace USA, said. “We have a long struggle, but we know we will win. We will win because we stand for justice, the truth and the rights of all people.”

At 3:30 p.m., crowds gathered at the Washington Monument while marches continued to take place across the country. The Peoples Climate Movement is a coalition of more than 900 organizations representing many of the major social justice, labor and environmental groups in the country, which has pledged to keep the momentum going.

The march was divided in creatively named contingents, like “Protectors of Justice,” “Reshapers of Power,” “Many Struggles, One Home” and “Fossil Fuel Resistance,” which included the growing resistance to President Trump’s and the Republican Party’s dismantling of climate and environmental policies. The bloc included activists and organizations fighting oil and gas drilling, coal mining, pipelines and power plants.

“After losing the popular vote, Trump surrounded himself with fossil fuel executives, climate-deniers and Wall Street bankers hellbent on destroying our planet,” Erich Pica, president of Friends of the Earth, said. “The real climate solution is to keep fossil fuels in the ground and invest in renewable energy.”

“Executives at oil companies, coal companies and the Wall Street banks that finance coal mines and oil pipelines don’t care about the climate or communities impacted by fossil fuels,” he said. “The only motivation is short-term profit. Today, we march to not only say ‘no more,’ but also we will fight and we will win.”

Nonprofits organizations and activists were not the only ones speaking out at the People’s Climate March. Socially-responsible businesses were there too, including Ben & Jerry’s, Patagonia, New Belgium Brewing Company and many others. Here’s a great picture of the Ben & Jerry’s melting cone: 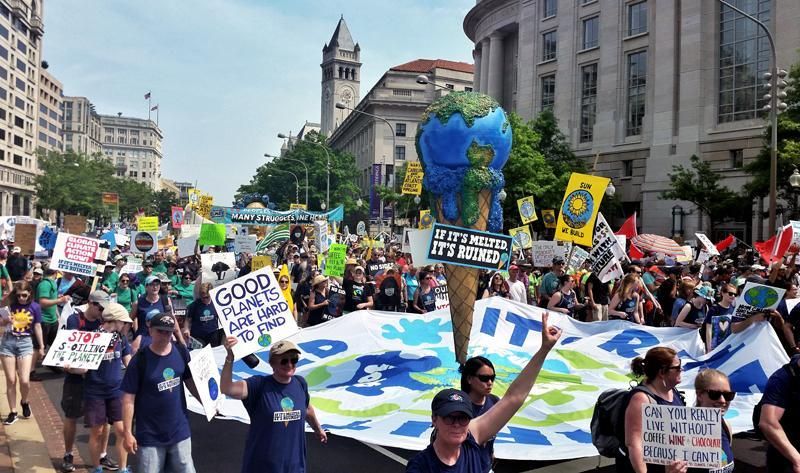 The People’s Climate March sent a resounding message to the Trump administration and members of Congress who continue to put corporate profits over the health of people and planet: Take climate action now. The voice of the people will not be silenced.

“Today’s actions are not for one day or one week or one year,” Paul Getsos, national coordinator for the Peoples Climate Movement, said. “We are a movement that is getting stronger everyday for our families, our communities and our planet. To change everything, we need everyone.”

350.org Executive Director May Boeve summed up the day perfectly:

“The first 100 days of Trump’s presidency have been hard. But today I can’t help but be filled with indomitable hope: We’ve marked the 100th day with unyielding resistance, heart and creativity.

“Today in the streets we are proving that we will continue to mobilize against Trump’s fossil fuel agenda. And this is only one part of the picture: The March for Science last weekend and Monday’s May Day strikes show the resistance will continue on many fronts.

“We’re on the precipice of launching an ambitious new grassroots push to stop every new fossil fuel project on the table and build 100% renewable energy in towns and cities nationwide. What we are doing today gives us real leverage to get there.

“There are always holes in the Death Star, and we will keep looking for them—on the 100th day and the 1,000th. Who knows what we’ll find.”