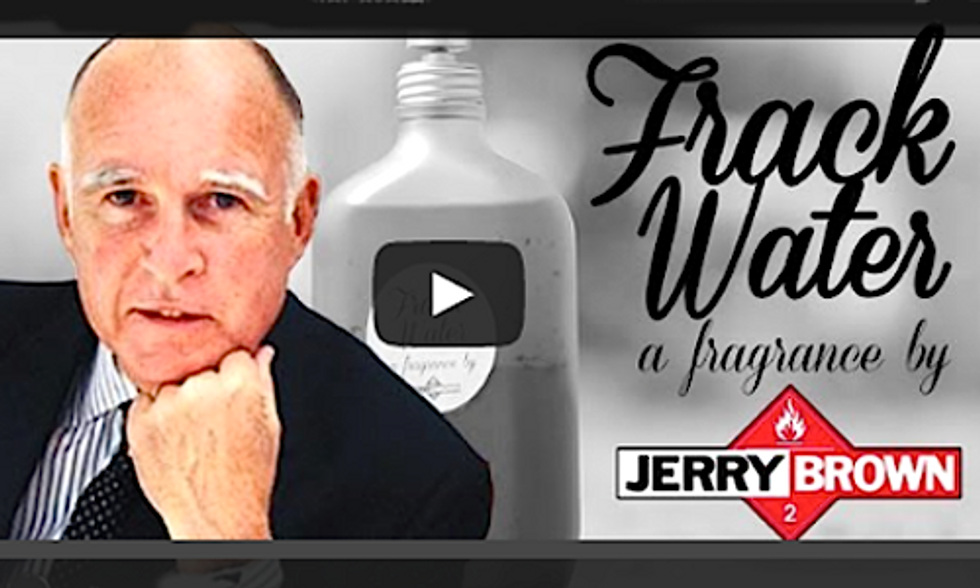 A satirical online video featuring Gov. Brown (D-CA) was released yesterday by Oil Change International, highlighting the Governor's penchant for fracking and dirty energy campaign donations. The video is the latest from the Big Oil Brown campaign effort which is pushing for a ban on fracking in California.

In the video the narrator says, “In a land plagued by drought, one man stands tall … We won’t tell you what’s in it, but Big Oil Brown’s got it all over him … Jerry Brown’s frackwater. A fragrance that smells like a man … a man who doesn’t give a [bleep] about drought or climate change.”

Oil Change International, in their new campaign, has outlined massive contributions from the oil industry to the Governor and other elected officials in recent years. The review shows that Gov. Brown has accepted at least $2,014,570.22 from fossil fuel interests since his race for Attorney General in 2006.

Amongst other revelations (such as, who is behind initiatives like Proposition 30 as well as the Governor's charter schools), the analysis shows Gov. Brown is already collecting for his 2014 re-election bid. There are still months until the primary and already Big Oil has made some big contributions:

The running total for just these four companies stands at $161,000 as of now for the 2014 election cycle.

“You can’t buy back your legacy, Governor, even with all that Big Oil cash,” David Turnbull, campaigns director for Oil Change International said. “California is on the brink of climate catastrophe and fracking up the state will help push it over the edge. Californians deserve better than to be beholden to Big Oil’s desires and befouled by their stench.”

As the public awakens to the dangers of fracking in California—including water scarcity concerns, environmental pollution and public health impacts—it is becoming increasingly obvious that Gov. Brown is being influenced by an industry that cares only about profit, not what’s best for Californians.

The video and analysis come just before a major mobilization in Sacramento, CA, planned for March 15, where thousands of anti-fracking activists from around the state are expected to join in protest.