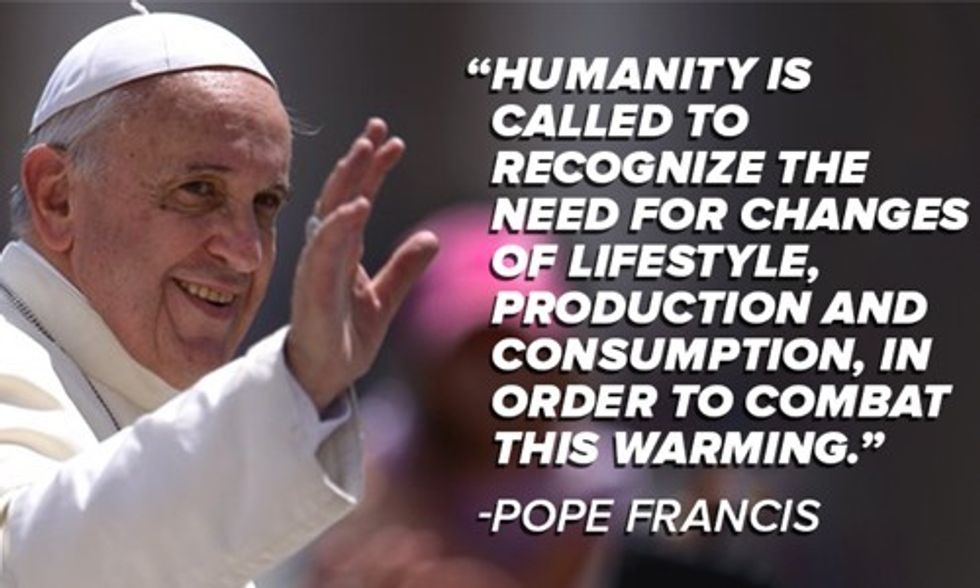 Pope Francis’ bold call to tackle climate change and save the planet appears to be in conflict with U.S. Catholic churches' millions of dollars of investments in fossil fuels industries, including fracking, a new Reuters report shows.

.@Pontifex: Humanity is called to recognize the need for changes of lifestyle to combat this warming. pic.twitter.com/XJugKBFD7f

Journalist Richard Valdmanis combed through church disclosures and portfolios and found: "Dioceses covering Boston, Rockville Center on Long Island, Baltimore, Toledo and much of Minnesota have all reported millions of dollars in holdings in oil and gas stocks in recent years."

"The holdings tend to make up between 5 and 10 percent of the dioceses' overall equities investments," Valdmanis noted, "Similar to the 7.1 percent weighting of energy companies on the S&P 500 index, according to the documents."

Furthermore, the investigation finds that, while the U.S. Conference of Catholic Bishops provides ethical guidelines discouraging investments in firms related to contraception, abortion, pornography and war, it does not issue similar warnings about fossil fuels stocks.

This is despite Pope Francis's 180-page Papal Encyclical, a formal letter to Catholic bishops released in June, underscoring the moral imperative to take aggressive steps to address climate change. "This home of ours is being ruined and that damages everyone, especially the poor," he wrote, adding: "The problem is aggravated by a model of development based on the intensive use of fossil fuels, which is at the heart of the worldwide energy system."

The Archdiocese of Chicago acknowledged to Reuters the contradiction between the pope's message and its over $100 million worth of fossil fuel investments. "We are beginning to evaluate the implications of the encyclical across multiple areas, including investments and also including areas such as energy usage and building materials," Betsy Bohlen, chief operating officer for the Archdiocese, told Reuters.

In response to growing grassroots campaigns across the globe, over 300 institutions worldwide have committed to divest from fossil fuels, roughly a quarter of them faith-based organizations. The United Church of Canada announced Tuesday it will be the latest religious institution to divest and the Catholic institution Georgetown University voted in early June, two weeks before the encyclical, to halt its direct investment of its endowment funds in coal mining companies.