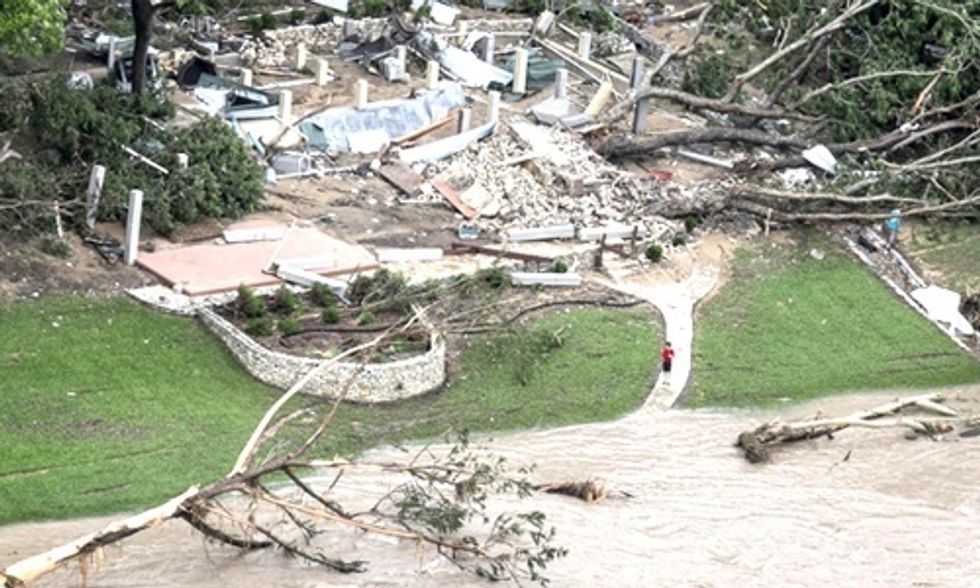 With at least a dozen people dead and the raging high waters described as having "tsunami-type power" in Texas over the Memorial Day weekend, the latest example of extreme weather in the U.S. is being tied to a global pattern of increasingly volatile events that are claiming lives and costing billions of dollars in damage each year.

A home on the Blanco River was taken off its foundation after heavy overnight rain caused flash flooding in Wimberley, Texas. Photo: Rodolfo Gonzalez / Austin American-Statesman

As Texas Gov. Greg Abbott expanded the range of a declared disaster zone in his state today, neighboring Oklahoma is also coping with an emergency response to flash floods and overflowing rivers.

Marking the official end of a four-year long drought in the south-central part of the country, the storms may be filling the region's diminished reservoirs, but not without a high cost.

As the nation's media focuses on the acute damage to property and loss of life, an international conference sponsored by the World Meteorological Organization (WMO), which kicked off in Switzerland yesterday, may shed additional light on the impact that human-caused climate change is having on the planet's highly-dynamic weather patterns.

With the title of 'Facing Up to Climate Change, Extreme Weather,′ the WMO conference is asking the world's foremost meteorologists to weigh in on how increased atmospheric and ocean temperatures created by carbon and other heat-trapping gases affect the planet's weather patterns.

"So far in 2015—as in preceding years—weather-related disasters have destroyed or disrupted millions of lives and livelihoods," said WMO Secretary-General Michel Jarraud ahead of the meeting. Citing devastating events like Cyclone Pam in Vanuatu, major droughts in India, California, and Brazil, and the kind of flooding that recently struck Chile and now being seen in Texas, Jarraud said the "list of extreme events is long and there is growing scientific evidence that at least some of them would have been unlikely without human-induced climate change."

With the next round of UN climate talks slated for later this year in Paris, Jarraud affirmed that the WMO's efforts will be aimed at addressing the threat of increasingly extreme weather caused by global warming. "It is a pivotal year for action on behalf of future generations," he said. "We have more than a responsibility. We have a moral duty to take action to limit climate change. If we don't do it we will be judged by our children and our grandchildren."

There is no argument that the planet has undergone many a climatic change in its 4.5-billion year history, but most scientists agree that this time is different. To name just one indicator, never before has the level of atmospheric carbon dioxide climbed as rapidly as in the last century, since the industrial revolution really took off. This month atmospheric CO2 reached 400 parts per million, a concentration last seen before man even began to evolve some 2.5 million years ago.

And while the cause of any individual weather event is debatable, a pattern has emerged, and it isn't business as usual.

The weekend's weather was also attributed in part to the naturally occurring phenomenon known as El Niño. But with the planet experiencing increasing warming due to humanity's continued emission of greenhouse gases, the current experience of those living in Texas and Oklahoma—intense flooding caused by heavy rains after prolonged periods of drought—is just one of the expected dangers that climate scientists have long warned about.

As ThinkProgress reported on Monday:

Going from one extreme to another is a hallmark of climate change. Scientists predict more droughts in the coming decades, as well as more intense rainstorms. In the midwest, the number of storms that drop more than three inches of rain have increased by 50 percent, according to an analysis from the Rocky Mountain Institute.

Texas and Oklahoma both face intensifying drought and flooding, although politicians in both states have denied climate change. According to the Natural Resources Defense Council, Texas “has yet to formally address climate change preparedness”—one of only 12 states to not have taken any steps toward addressing the impacts of climate change on water resources.

“Between more intense rainstorms and sea level rise, flooding will only increase if we don’t address climate change,” according to the Natural Resources Defense Council.