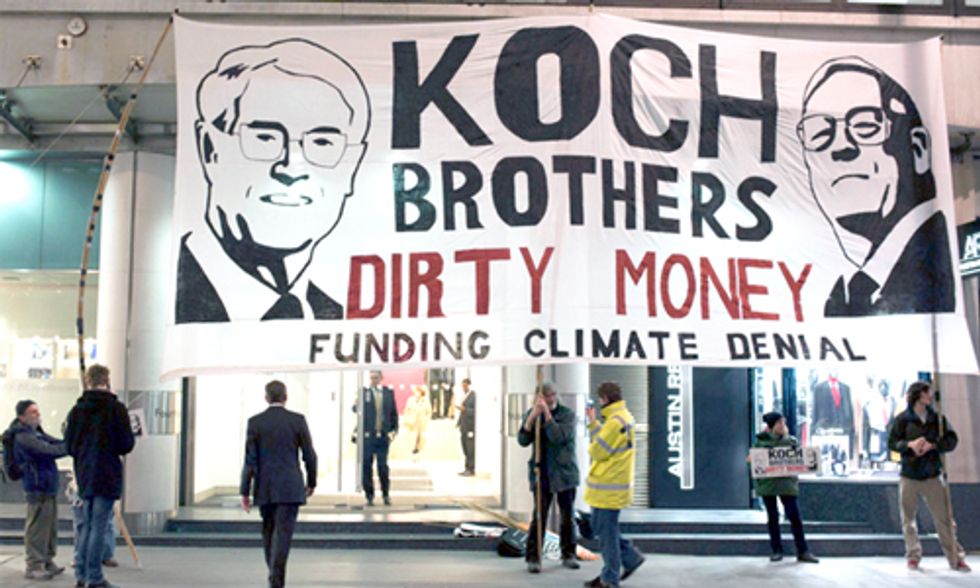 Brothers Charles and David Koch run Koch Industries, the second-largest privately owned company in the U.S., behind Cargill. They’ve given close to US$70 million to climate change denial front groups, some of which they helped start, including Americans for Prosperity, founded by David Koch and a major force behind the Tea Party movement.

Koch brothers dirty money protest outside the City of London offices of Koch Industries, which funds American proponents of Climate Change Denial. The second biggest privately owned corporation in the USA, it is controlled by the Koch brothers, and also funds the Tea Party movement. Photo credit: P.WOLMUTH/REPORT DIGITAL-REA/Redux

Through their companies, the Kochs are the largest U.S. leaseholder in the Alberta oilsands. They’ve provided funding to Canada’s pro-oil Fraser Institute and are known to fuel the Agenda 21 conspiracy theory, which claims a 1992 UN non-binding sustainable development proposal is a plot to remove property rights and other freedoms.

Researchers reveal they’re also behind many anti-transit initiatives in the U.S., in cities and states including Nashville, Indianapolis, Boston, Virginia, Florida and Los Angeles. They spend large amounts of money on campaigns to discredit climate science and the need to reduce greenhouse gases, and they fund sympathetic politicians.

In late January, 50 U.S. anti-government and pro-oil groups—including some tied to the Kochs and the pro-oil, pro-tobacco Heartland Institute—sent Congress a letter opposing a gas tax increase that would help fund public transit, in part because “Washington continues to spend federal dollars on projects that have nothing to do with roads like bike paths and transit.”

The letter says “transportation infrastructure has a spending problem, not a revenue problem,” an argument similar to one used by opponents of the transportation plan Metro Vancouver residents are currently voting on. Vancouver’s anti-transit campaign is led by the Canadian Taxpayers Federation—a group that doesn’t reveal its funding sources and is on record as denying the existence of human-caused climate change—along with Hamish Marshall, a conservative strategist with ties to Ethical Oil.

American and Canadian transit opponents paint themselves as populist supporters of the common people, a tactic also used against carbon pricing. Marshall told Business in Vancouver, “I love the idea of working on a campaign where we can stand up for the little guy.” The U.S. letter claims the gas tax increase “would disproportionately hurt lower income Americans already hurt by trying times in our economy.” Both fail to note that poor and middle class families will benefit most from public transit and other sustainable transportation options.

Although many organizations that promote the fossil fuel industry and reject the need to address climate change—including the Heartland Institute, International Climate Science Coalition, Ethical Oil and Friends of Science—are secretive about their funding sources, a bit of digging often turns up oil, gas and coal money, often from the Kochs in the U.S. And most of their claims are easily debunked. In the case of the U.S. Heartland Institute, arguments stray into the absurd, like comparing climate researchers and those who accept the science to terrorists and murderers like the Unabomber and Charles Manson!

It’s also poor economic strategy on a societal level. Besides contributing to pollution and global warming, fossil fuels are becoming increasingly difficult, dangerous and expensive to exploit as easily accessible sources are depleted—and markets are volatile, as we’ve recently seen. It’s crazy to go on wastefully burning these precious resources when they can be used more wisely, and when we have better options. Clean energy technology, transit improvements and conservation also create more jobs and economic activity and contribute to greater well-being and a more stable economy than fossil fuel industries.

To reduce pollution and address global warming, we must do everything we can, from conserving energy to shifting to cleaner energy sources. Improving transportation and transit infrastructure is one of the easiest ways to do so while providing more options for people to get around.

Those who profit from our continued reliance on fossil fuels will do what they can to convince us to stay on their expensive, destructive road. It’s up to all of us to help change course.

ALEC in Denial of Its Climate Denial, Threatens to Sue