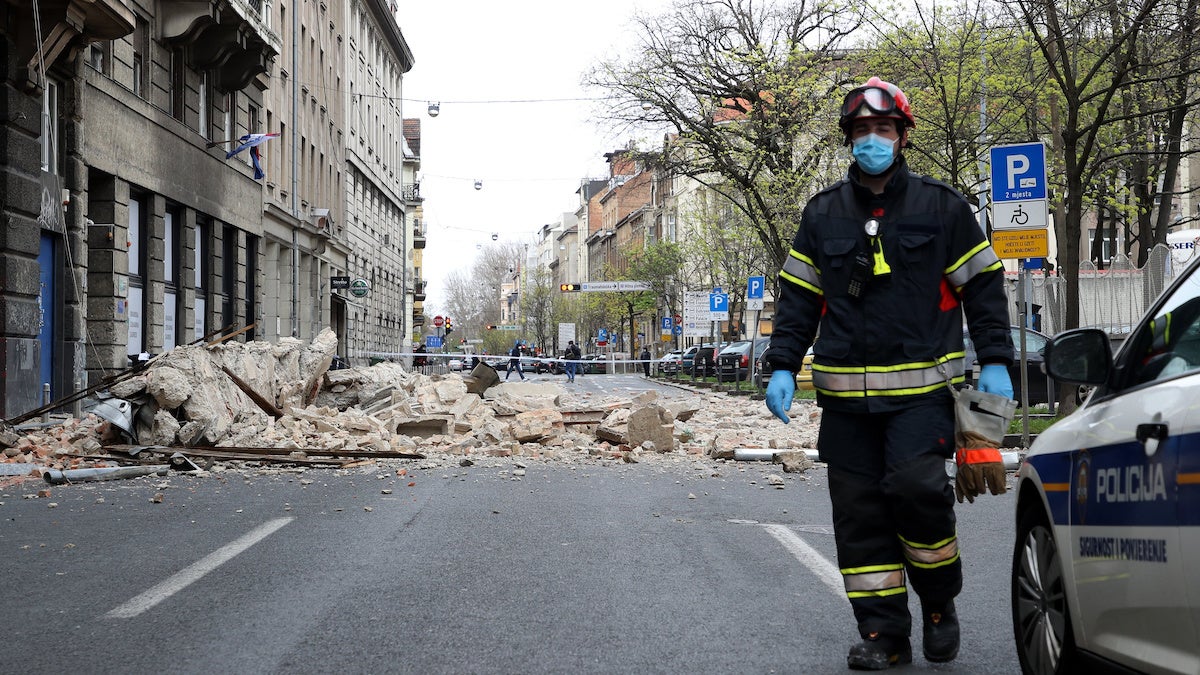 A Croatian fireman walks past rubble in a street of downtown Zagreb, Croatia on March 22, 2020, after a 5.3 magnitude earthquake hit the country. DAMIR SENCAR / AFP via Getty Images

Croatia’s capital of Zagreb was rocked Sunday by its strongest earthquake in 140 years, which pushed people out into the streets at exactly the moment they were supposed to stay indoors to fight the spread of the coronavirus.

The earthquake caused widespread damage, injured 17 and forced hospitals to evacuate, The Guardian reported. But earthquake survivors also had to worry about staying apart while out in the streets.

“Keep your distance. Don’t gather together. We are facing two serious crises, the earthquake and the epidemic,” Interior Minister Davor Bozinovic advised, as BBC News reported.

Among the locations evacuated was a maternity hospital, according to The Guardian. Mothers and their babies stood outside in a freezing parking lot before the army moved them and their incubators to a new location.

A destructive 5.4 magnitude #earthquake hit Zagreb, Croatia this morning – the strongest in 140 years!💔 It breaks my heart to see the hospitals evacuated like this during #coronavirus with patients and mothers with their newborn babies out in the cold 😩 pic.twitter.com/YC6rikESHs

The quake was a magnitude 5.4 according to the European Mediterranean Seismological Centre, and it rattled the city at 6:24 a.m. local time.

Initial reports said one 15-year-old was killed, but doctors then said the patient was in critical condition, The Associated Press reported. The quake also damaged several buildings, including the historic Zagreb cathedral and the country’s parliament, The Guardian reported.

One spire of the cathedral, which was rebuilt following another earthquake in 1880, collapsed, and the parliament building was so badly damaged that its speaker Gordan Jandroković said sessions would have to be postponed.

“The damage is quite extensive. Walls and stairways have cracked on the upper floor and one section of the roof has been destroyed,” Jandroković said.

But the earthquake wasn’t the only danger facing Croatians Sunday morning. They also had to consider COVID-19, which has sickened at least 235 people in the country so far. Zagreb is on partial lockdown, The Associated Press reported. Residents had been advised to avoid public places and only gather in groups of five with distance between them.

“Earthquakes are dangerous, but coronavirus is even more so,” Beros said.

The government initially advised people to leave their homes, BBC News reported, but Zagreb’s Mayor Milan Bandic then recommended they return home, since 80 percent of Zagreb residents live in structures reinforced with concrete.

Prime Minister Andrej Plenkovic acknowledged the confusion of the situation.

“We have two parallel cris[es] that contradict each other,” he said, according to The Associated Press.