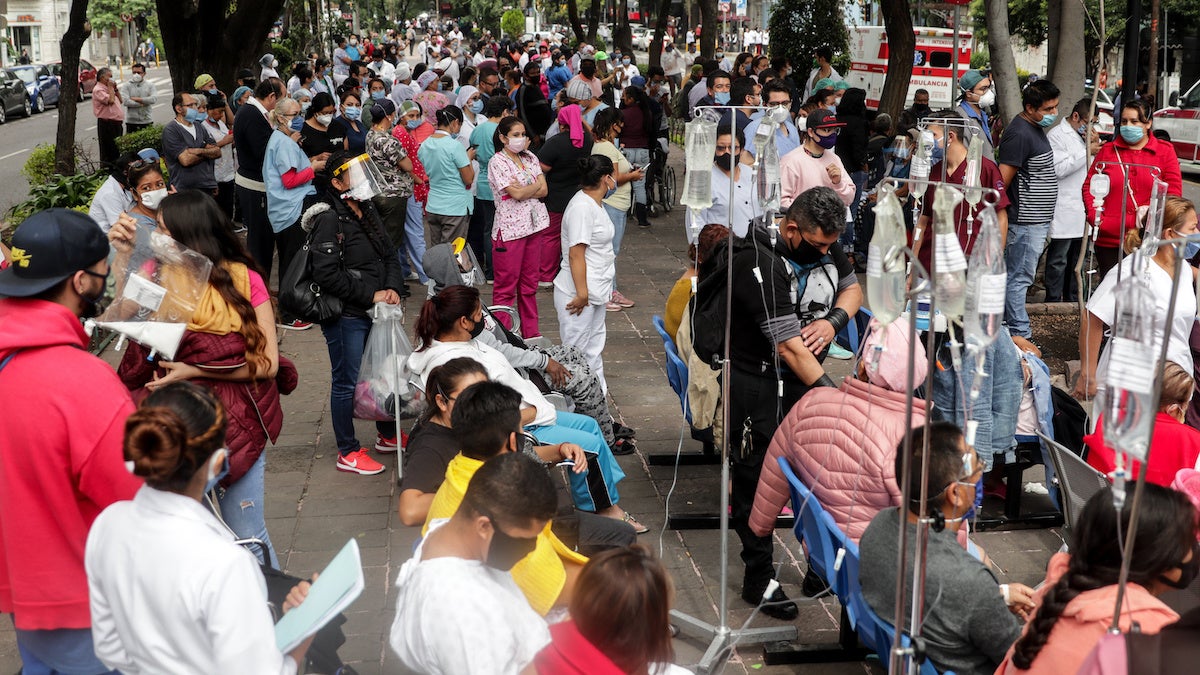 Evacuated patients, medical workers and local residents on a street in Mexico City, Mexico, after an earthquake more than 400 miles away rattled the city on June 23, 2020. Francisco Canedo / Xinhua via Getty Images

Mexico’s national seismological service said the quake had a magnitude of 7.5 while the U.S. Geological Survey (USGS) put it at 7.4, according to The New York Times. It struck around 10:29 a.m. local time and was centered about 14 miles off the Pacific Coast of the southern state of Oaxaca.

Around 200 houses near the epicenter were damaged, a local official told Reuters, 30 severely so.

“We lost everything in one moment to nature,” Vicente Romero, a stationary store owner whose home was significantly damaged, told Reuters. “This is our life’s work.”

#BREAKING: A magnitude 7.4 earthquake strikes Mexico. Look at this video of a building in the area where the earthquake happened.#FOX26 #LIVEDESK

One of the deaths occurred at state-run oil company Pemex, when a worker fell off a refinery structure, The Guardian reported. The earthquake also sparked a fire at a Pemex refinery in the Pacific city of Salina Cruz. It injured one worker before it was snuffed out.

Despite these individual tragedies, the overall damage was relatively minor.

“Fortunately there was no major damage,” Mexican President Andrés Manuel López Obrador said in a Twitter video reported by The New York Times.

Obrador said there had been 147 aftershocks as of early Tuesday afternoon.

“I hope and I wish with all my soul that there will be no more damaging aftershocks,” he said.

Some of the buildings that were damaged included hospitals, The Oaxacan Health Services said, as CNN reported. Two of the damaged hospitals had been treating coronavirus patients.

“We are verifying [damages] because this hospital is also tending Covid cases on the Oaxacan coast,” Oaxaca state Gov. Alejandro Murat said, as CNN reported.

The earthquake was felt in Guatemala, Honduras and El Salvador and rattled buildings in Mexico City, more than 400 miles away.

“It really moved,” Francisco Aceves, who owns an import-export firm in Mexico City and was on the 22nd floor of an office building when it started, told The Guardian.

Two people in Mexico’s capital were injured and more than 30 buildings were damaged, Reuters reported.

Mexico is one of the most seismically active countries in the world, according to CNN, because it sits atop three tectonic plates.

Also in 2017, Mexico was struck by the strongest earthquake to rattle it in a century when an 8.2 temblor was recorded off the Pacific Coast, according to The New York Times. That earthquake killed at least 90 and mostly impacted the states of Oaxaca and Chiapas.

Eunice Pineda, a 26-year-old teacher in Juchitan, told Reuters that Tuesday’s quake “was two minutes of torture,” but she also had adopted a philosophical outlook about the earthquakes that rattle her home.

“We learn to appreciate, to treasure every moment,” she said.