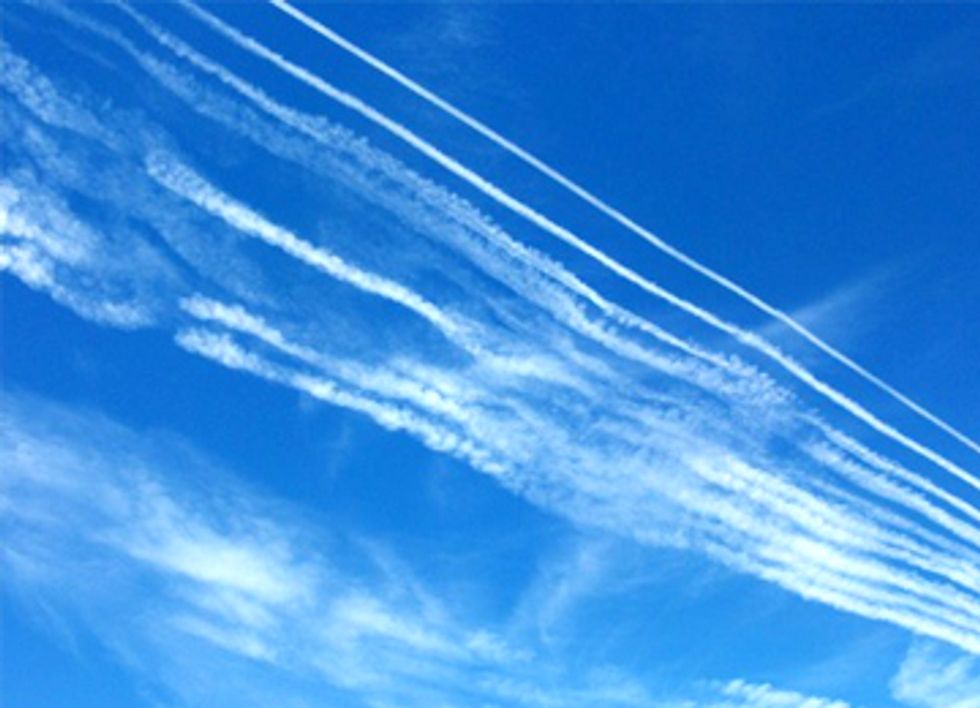 I recently wrote about geoengineering as a strategy to deal with climate change and carbon dioxide emissions. That drew comments from people who confuse this scientific process with the unscientific theory of “chemtrails.” Some also claimed the column supported geoengineering, which it didn’t.

The reaction got me wondering why some people believe in phenomena rejected by science, like chemtrails, but deny real problems demonstrated by massive amounts of scientific evidence, like climate change.

Chemtrails believers claim governments around the world are in cahoots with secret organizations to seed the atmosphere with chemicals and materials—aluminum salts, barium crystals, biological agents, polymer fibres, etc.—for a range of nefarious purposes. These include controlling weather for military purposes, poisoning people for population or mind control and supporting secret weapons programs based on the High Frequency Active Auroral Research Program (HAARP).

Scientists have tested and used cloud and atmospheric seeding for weather modification and considered them as ways to slow global warming. With so many unknowns and possible unintended consequences, these practices have the potential to cause harm. But the chemtrails conspiracy theory is much broader, positing that military and commercial airlines are involved in constant massive daily spraying that is harming the physical and mental health of citizens worldwide.

I don’t have space to get into the absurdities of belief in a plot that would require worldwide collusion between governments, scientists and airline company executives and pilots to amass and spray unimaginable amounts of chemicals from altitudes of 10,000 meters or more. I’m a scientist, so I look at credible science—and there is none for the existence of chemtrails. They’re condensation trails, formed when hot, humid air from jet exhaust mixes with colder low-vapor-pressure air. This, of course, comes with its own environmental problems.

But what interests me is the connection between climate change denial and belief in chemtrails. Why do so many people accept a theory for which there is no scientific evidence while rejecting a serious and potentially catastrophic phenomenon that can be easily observed and for which overwhelming evidence has been building for decades?

To begin, climate change denial and chemtrails theories are often conspiracy-based. A study by researchers at the University of Western Australia found “endorsement of a cluster of conspiracy theories … predicts rejection of climate science as well as the rejection of other scientific findings.

Many deniers see climate change as a massive plot or hoax perpetrated by the world’s scientists and scientific institutions, governments, the United Nations, environmentalists and sinister forces to create a socialist world government or something.

Not all go to such extremes. Some accept climate change is occurring but deny humans are responsible. Still, it doesn’t seem rational to deny something so undeniable! In a Bloomberg article, author and Harvard Law School professor Cass R. Sunstein points to three psychological barriers to accepting climate change that may also help explain why it’s easier for people to believe in chemtrails: people look to readily available examples when assessing danger, focus “on risks or hazards that have an identifiable perpetrator,” and pay more attention to immediate threats than long-term ones.

People who subscribe to unbelievable conspiracy theories may feel helpless, so they see themselves as victims of powerful forces—or as heroes standing up to those forces. Whether it’s to deny real problems or promulgate imaginary ones, it helps reinforce a worldview that is distrustful of governments, media, scientists and shadowy cabals variously referred to as banksters, global elites, the Illuminati or the New World Order.

The problem is that science denial is, in the case of chemtrails, a wacky distraction and, in the case of climate change denial, a barrier to addressing an urgent, critical problem. Science is rarely 100 percent certain, but it’s the best tool we have for coming to terms with our actions and their consequences, and for finding solutions to problems. The science is clear: human-caused climate change is the most pressing threat to humanity, and we must work to resolve it. We don’t have time for debunked conspiracy theories.