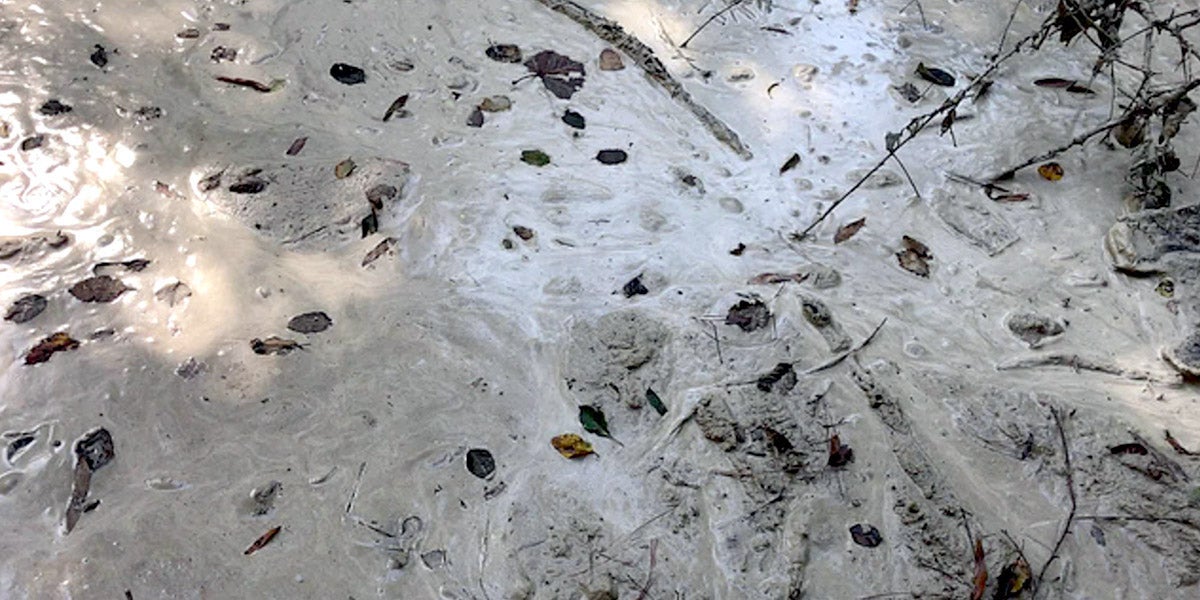 Waterkeeper Alliance and Sound Rivers have discovered a large coal ash spill into the Neuse River from the Duke Energy H.F. Lee facility, 10 miles upstream of Goldsboro, North Carolina. A substantial but undetermined amount of coal ash was found floating on the surface of the river in a layer over one inch thick. See the video below:

The spill came from at least one of three inactive coal ash ponds containing more than 1 million tons of exposed coal ash. The ponds had been submerged by Hurricane Matthew flood waters for more than seven days until flood waters receded over the weekend. Fly ash coated tree branches as much as seven feet above the river surface, indicating the spill began no later than last Tuesday, when the water level reached a record flood stage. 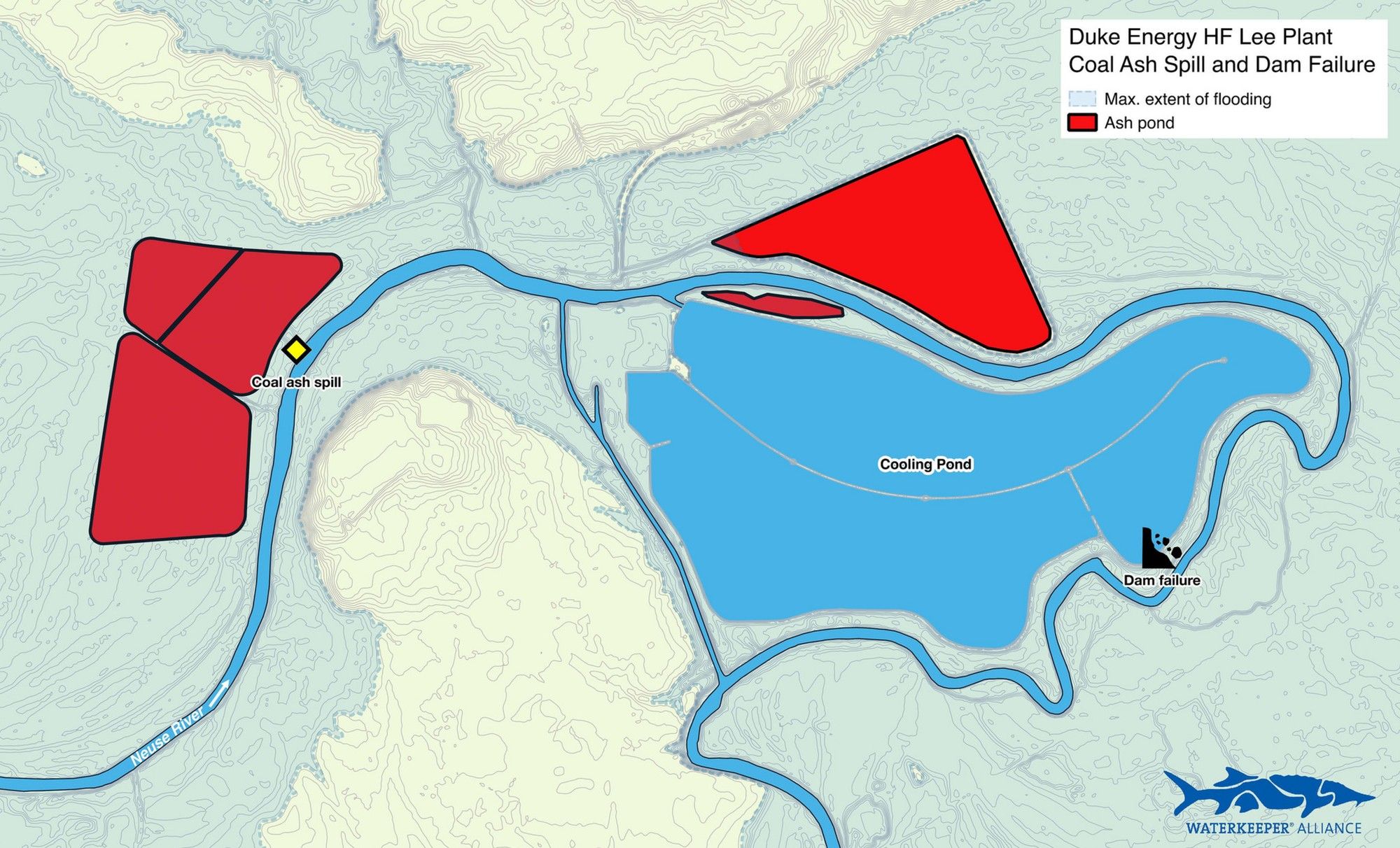 “This spill is easily visible to anyone in a boat. The area looks like a winter wonderland of toxic coal ash as it has coated the water and trees. It is hard for me to understand how both Duke Energy and state regulators failed to notice such a large area of coal ash contaminating the Neuse River when they claim to have inspected these very ash ponds on Saturday.”

“Site inspections at the H.F. Lee Power Plant in Goldsboro, N.C., today confirm there was only very minor erosion of material from an inactive coal ash basin on the site.

The majority of that material, which includes coal ash, remained very close to the inactive basin, on the berm or a few feet away on the basin roadway. The state team that inspected the facility determined that the amount of material that was displaced would not even fill the bed of an average pickup truck.”

“When a raging river floods over 1 million tons of coal ash, you’re obviously going to get more than a pickup truck’s worth of ash polluting the river,” said Waterkeeper Alliance staff attorney Pete Harrison.

“It was very troubling to discover such a large amount of ash in the river, especially knowing that untold amounts of ash have been washing out of these ponds for more than a week now. It’s baffling how Duke Energy could be so oblivious to such an obvious spill and how state regulators continue to look the other way when it comes to Duke’s coal ash problems.” 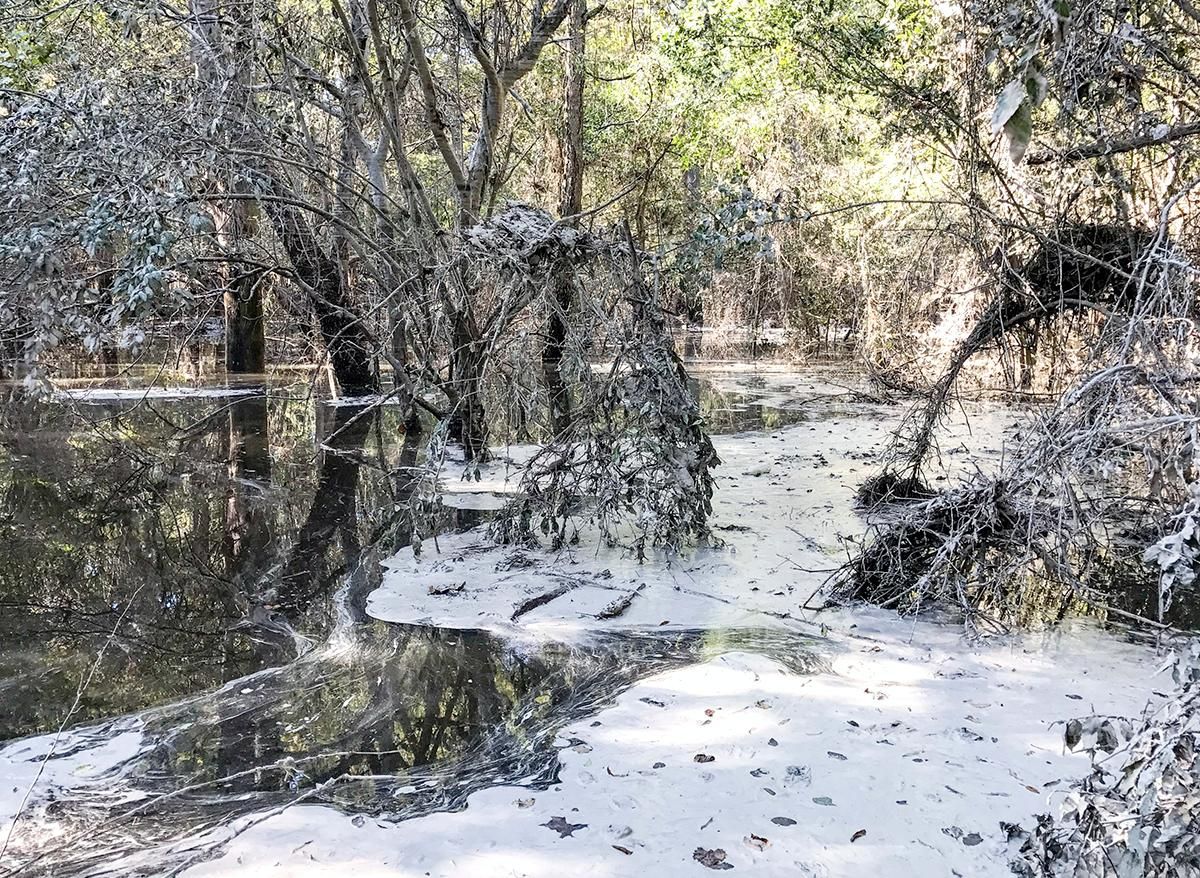 An substantial but undetermined amount of coal ash was found floating on the surface of the Neuse river in a layer more than an inch thick.Pete Harrison / Waterkeeper Alliance & Matt Starr / Upper Neuse Riverkeeper / Sound Rivers

Four of five retired coal ash ponds at the H.F. Lee plant near Goldsboro, North Carolina were inundated for at least 7 days. The submerged ponds contain more than one million tons of coal ash, spread in a layer between four and ten feet thick across an area the size of 130 football fields. In a 2015 site assessment, Duke Energy reported high levels of toxic heavy metals in the flooded ponds, including arsenic, antimony and thallium.

Last week at the H.F. Lee facility, Duke Energy failed to identify a breach in a cooling pond dam the size of a school bus for as much as 24 hours before a local news helicopter spotted the collapsed dam and reported it to officials.