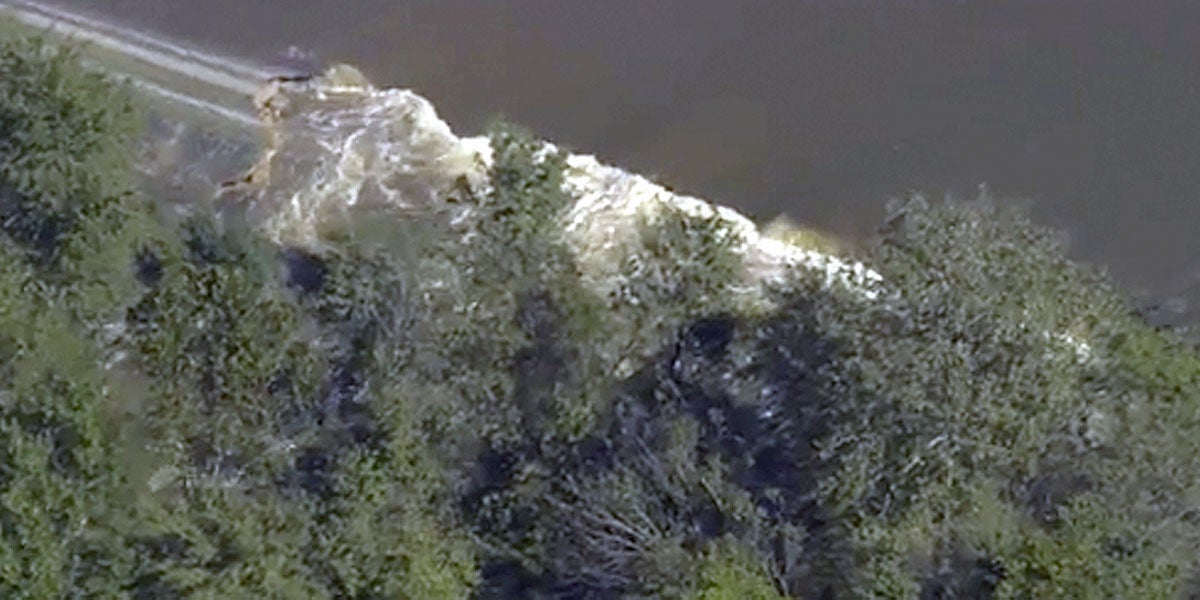 The embarrassment continues for Duke Energy who is dealing with the breach of a 1.2-billion-gallon cooling pond dam at its H.F. Lee plant due to flooding from Hurricane Matthew.

It all began Wednesday morning when Duke Energy issued a statement claiming that the “ash basin and cooling pond dams across the state continue to operate safely,” but then helicopter footage from Raleigh’s local television station WRAL showed that one of the dams had been breached.

In the statement, Duke Energy also attacked Waterkeeper Alliance for raising what Duke considered inaccurate and inappropriate concerns about the safety of coal ash ponds in the wake of Matthew.

On Thursday, Duke spokeswoman Erin Culbert confirmed to the Charlotte Business Journal that the company found out about the breach after WRAL contacted Duke about a half-hour after their statement came out and shared its video. Culbert said a Duke inspection crew had flown over the area earlier in the morning and, at the time, the dam was intact and showed no signs of stress. After they saw the video, the company put out an update acknowledging the damage at the dam. 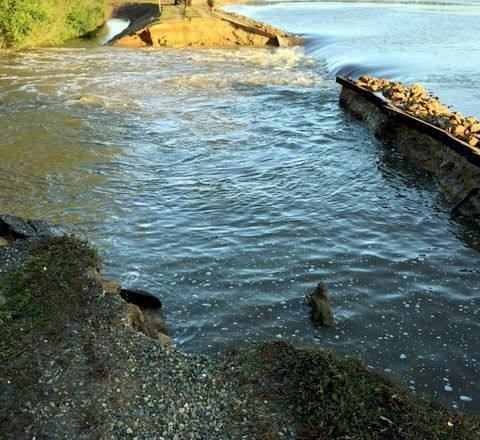 The breach at the main cooling pond is visible on the right of the photo and is releasing to the Neuse River, which is outside of the frame on the left.Duke Energy

“We are really grateful for their good timing which allowed us to respond and put our emergency protocols into effect,” Culbert said.

Donna Lisenby of Waterkeeper Alliance said this incident proves Duke Energy was “asleep at the switch when it was supposed to be monitoring the safety of dams at the H.F. Lee facility during record setting floods.”

“They weren’t aware of a 50-foot wide breach in the cooling pond dam until notified by a TV crew. How is it possible for a company with helicopters actively flying over dams and hundreds of engineers to miss a 50-foot-wide breach? Apparently, one small WRAL news crew is more competent and better at monitoring the safety and integrity of Duke Energy dams than all the hundreds of Duke Energy employees and contractors combined,” Lisenby exclaimed.

Duke Energy said the 545-acre man-made reservoir that was breached does not contain coal ash and supplies cooling water to power plants at the site. It said the active ash basins are not affected by this incident and continue to operate safely.

“We are giving this our fullest attention,” said Regis Repko, senior vice president of Fossil-Hydro Operations. “We are assessing what resources we need and will position repair materials so we can respond quickly once conditions are safe to do so.”

Waterkeeper Alliance said they remain very concerned about the integrity of Duke Energy’s ash pond dams as the river recedes over the next week.

“This failure likely happened because the river has begun to recede, which is when structural problems often develop,” Pete Harrison, staff attorney at Waterkeeper Alliance, and Matthew Starr, Upper Neuse Riverkeeper, said Wednesday. “Like so many of Duke Energy’s coal ash ponds across the state, the cooling pond at Lee has a long history of structural problems—these are disasters waiting to happen.”

In addition to concerns at Duke Energy’s coal ash ponds, environmentalists are keeping an eye on floodwaters that have washed over factory farms in eastern North Carolina following the storm.

Millions of chickens are feared dead after at least a half-dozen poultry houses were found completely flooded and tens of thousands of carcasses were seen floating the water in Cumberland and Robinson counties.