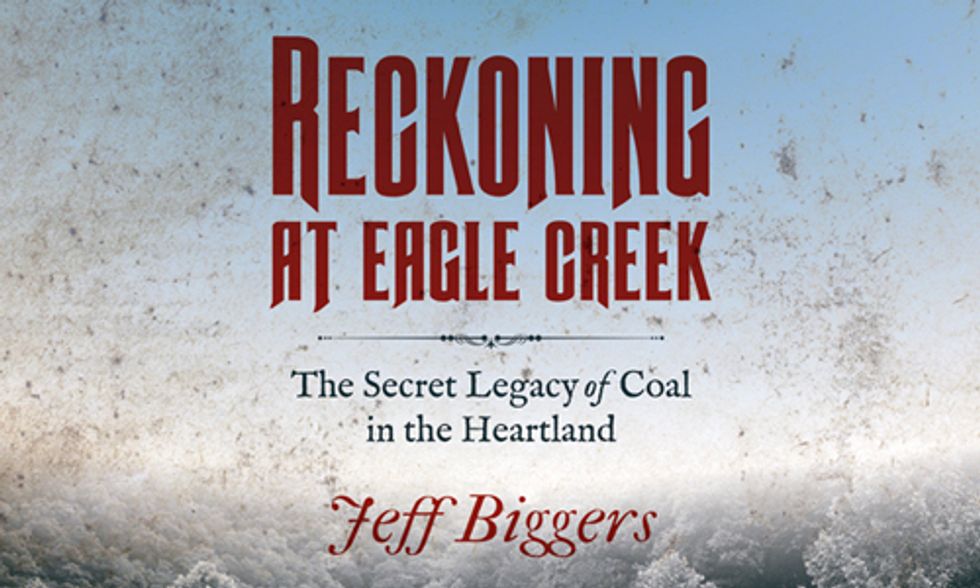 Four years after the publication of my memoir/history, Reckoning at Eagle Creek: The Secret Legacy of Coal in the Heartland, I found myself sitting in the front row of an Illinois Environmental Protection Agency hearing in southern Illinois. It was a historic evening in Harrisburg, only a few miles from where Peabody Energy sank its first coal mine in 1895, and a few blocks from where I had sat on the front porch as a kid and listened to the stories of my grandfather and other coal miners about union battles for justice. For the first time in decades, residents in coal country were shining the spotlight on issues of civil rights, environmental ruin and a spiraling health crisis from a poorly regulated coal mining rush.

The total destruction of my family's nearby Eagle Creek community from strip-mining was held up as their cautionary tale. The takeaway: Strip-mining more than stripped the land; it stripped the traces of any human contact.

“We have lost population, we have lost homes and we have lost roads,” testified Judy Kellen, a resident facing an expanded strip mine in Rocky Branch. “We have lost history. We have to endure dust, noise levels to the pitch you wanted to scream because you couldn’t get any rest or sleep, earth tremors, home damages, complete isolation of any type of view to the north, health issues, a sadness in your heart that puts a dread on your face every day, and an unrest in the spirit that we knew nothing of.”

A lot has changed in these four years—much of it troubling, and much of it inspiring.

After traveling to coal mining communities around the U.S. and the world, I have learned that my own private reckoning with coal in the great Shawnee forests surrounding Eagle Creek was only a prologue to our greater climate reckoning for my children.But first, the inspiring part: Faced with losing their homes, farms, health—and sheer sanity—from the blasting and non-stop war-zone traffic of coal operators within 300 feet of their living rooms—southern Illinois residents with deep coal mining roots in Harrisburg were taking a courageous stand for climate and coalfield justice. Meanwhile, former coal mining areas from central Appalachia to Germany to Scotland have begun the process of transitioning to clean energy economies.

Here's the troubling part: Four years after the publication of Reckoning at Eagle Creek, Illinois is in the throes of a coal-mining rush not seen in nearly a century, recognized as the fastest-growing coal region in the nation. Since 2009, the state's mining production has increased by more than 60 percent.

In that same time period, my kids—the 9th generation of our family to be born in Illinois—and I have watched coal barges ease down the Mississippi and Ohio Rivers in a fivefold increase in coal exports, en route to CO2-spewing coal-fired plants abroad. The wake-up call: Illinois has experienced record drought and flooding, as climate scientists determined our planet had reached the alarming 400 parts-per-million milestone of CO2 emissions for the first time in millions of years.

Coal miners remain the canaries in the coal mine: Black lung disease among coal miners, an issue dear to my heart and to anyone who has watched their loved ones and friends suffer needlessly, is at record levels in 2014.

And communities not far from my beloved Eagle Creek, including members of my own displaced family, have once again found themselves on the front lines of mining destruction. As part of an “all-of-the’above” energy policy touted by President Barack Obama and Illinois Gov. Pat Quinn—a Sierra Club-supported Democrat who once led anti-strip-mining campaigns and swept into office on promises of regulatory reform—the heartland has undergone a series of mind-boggling machinations in favor of coal mining and hydraulic fracking.

Even as states start the long process of responding to the proposed U.S. Environmental Protection Agency (EPA) regulations to cut CO2 emissions from coal-fired power plants by 30 percent, coal industry lobbyists and their political sycophants continue to roll out the wildly inaccurate “war on the coal” slogans with fervor, and double down on their denial of climate change.

It begins with our kids: Despite a campaign by former coal miner Sam Stearns to halt the state's cringe-worthy "coal education" program, Illinois continues to push coal industry propaganda and climate denial into our schools.

It extends into our farm communities, like Hillsboro in central Illinois, where elderly farmers are fighting to protect their fertile land and watersheds from longwall mining and coal slurry pollution.

In these last four years, we have witnessed the cycles of hype and indifference over our coal mining disasters, coal slurry, coal ash and coal-related chemical spills, most notably in West Virginia last spring, which contaminated the drinking water for 300,000 residents near Charleston.And we have seen a stunning disregard for law enforcement by government agencies. An Associated Press investigation made a startling discovery this year of a coal industry run amok:

“...[A] review of federal environmental enforcement records shows that nearly three-quarters of the 1,727 coal mines listed haven't been inspected in the past five years to see  if they are obeying water pollution laws. Also, 13 percent of the fossil-fuel fired power plants  are not complying with the Clean Water Act.”

Nowhere has such recklessness been so evident than in my own southern Illinois.

I have learned two things from the loss of Eagle Creek and the treatment of coal miners like my grandfather and residents in today's coal mining communities; in a nation that prioritizes coal industry profits over workplace and residential safety, people are as disposable as our natural resources in openly accepted national sacrifice zones. And secondly, all coal mining safety laws have been written in miners' blood; the same is true for innocent citizens afflicted by clean water violations by coal and chemical companies.

This disregard for basic health and civil rights doesn't end here, though.  The fallout over increasing climate disturbances brings a harrowing message: We all live in the coalfields now. Extreme energy extraction and fossil fuel burning, as the Intergovernmental Panel on Climate Change (IPCC) recently warned, is leading us to “severe, pervasive and irreversible impacts for people and ecosystems.”With the exigency of action on climate change, and the mounting death toll and costs from coal mining, the heartland—like our nation—has reached a crossroads in our energy policy: It’s time to fashion a just transition toward a more sustainable and diversified economy, including clean energy development, especially for those in historical coal mining communities--not just urban centers like Chicago that are connected to political power and pay-offs.

We need a plan for regeneration, not simply more unenforced EPA regulations.

How can we keep the carbon in the ground? By ensuring that our people and our ingenuity are considered our greatest natural resources.After shouldering the massive health and environmental costs of powering our nation’s industrial rise to fortune over the past century, impoverished communities on the front lines of extraction should be in the forefront of clean energy investment and jobs. We need a regeneration fund for retraining and initiatives to jump-start reforestation and abandoned mine projects, along with start-up funds for solar and wind energy manufacturing and energy-efficiency campaigns.

Reckoning at Eagle Creek is my attempt to not only restore and “re-story” Eagle Creek and its place in history, but also plant the seeds to regenerate its unique contributions to our future American story.

To ask Abraham Lincoln's question in our own times: "It is not 'can any of us imagine better?' but, 'can we all do better?' The dogmas of the quiet past, are inadequate to the stormy present. The occasion is piled high with difficulty, and we must rise—with the occasion. As our case is new, so we must think anew, and act anew. We must disenthrall ourselves, and then we shall save our country."

This essay was adapted from the new Foreword to the paperback edition of Reckoning at Eagle Creek: The Secret Legacy of Coal in the Heartland, released this week by Southern Illinois University Press.