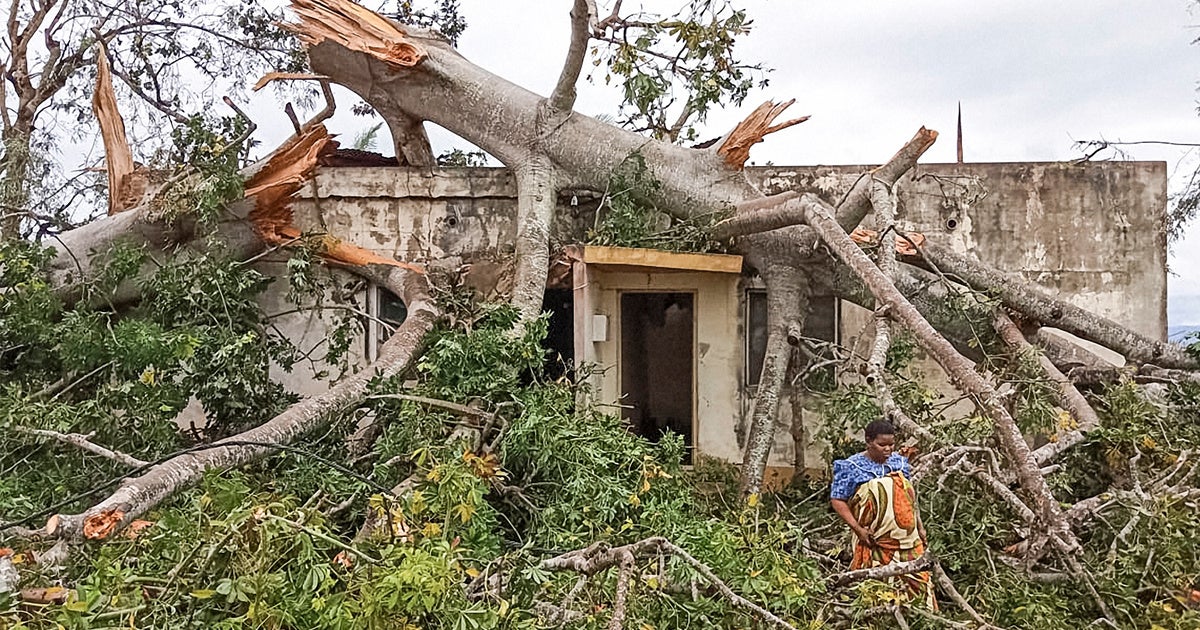 A woman in Macomia, northern Mozambique assesses the damage after a baobab tree slammed into her home during Cyclone Kenneth on April 28. EMIDIO JOZINE / AFP / Getty Images

A “staggering” new warning from a top United Nations official that climate crisis-related disasters are now occurring at the rate of one per week, with developing nations disproportionately at risk, provoked calls for immediate global action to combat the human-caused climate emergency.

The warning came in an interview with The Guardian, which reported Sunday:

Catastrophes such as cyclones Idai and Kenneth in Mozambique and the drought afflicting India make headlines around the world. But large numbers of “lower impact events” that are causing death, displacement, and suffering are occurring much faster than predicted, said Mami Mizutori, the U.N. secretary-general’s special representative on disaster risk reduction. “This is not about the future, this is about today.”
This means that adapting to the climate crisis could no longer be seen as a long-term problem, but one that needed investment now, she said. “People need to talk more about adaptation and resilience.”

“We talk about a climate emergency and a climate crisis, but if we cannot confront this [issue of adapting to the effects] we will not survive,” Mizutori added. “We need to look at the risks of not investing in resilience.”

The estimated annual cost of climate-related disasters is 0 billion, the newspaper noted, “while the additional cost of building infrastructure that is resistant to the effects of global heating is only about 3 percent, or .7 trillion in total over the next 20 years.”

“This is not a lot of money [in the context of infrastructure spending], but investors have not been doing enough,” said Mizutori. “Resilience needs to become a commodity that people will pay for.”

Mizutori said that improving the systems that warn the public of severe weather and expanding awareness of which places and people are most vulnerable could help prevent lower impact disasters. She noted that while urgent work is needed to prepare the developing world, richer countries are also experiencing the consequences of global heating — including devastating wildfires and dangerous heatwaves.

The adaption measures Mizutori called for include raising — and enforcing — infrastructure standards to make houses and businesses, roads and railways, and energy and water systems more capable of withstanding the impacts of the warming world, which scientists warn will increasing mean more frequent and intense extreme weather events. She also highlighted the potential of “nature-based solutions.”

Sharing The Guardian‘s article on Twitter, the U.S.-based youth-led Sunrise Movement declared: “This is an emergency. We need political leadership that acts like it.”

“This is why it’s so offensive to talk about climate impacting ‘our children/grandchildren,'” tweeted War on Want executive director Asad Rehman, referencing a common talking point among U.S., European and UN leaders. “Do people of global South facing disaster every week not deserve the right to life? The answer from rich countries and those who call for net zero by 2050 is a big No.”