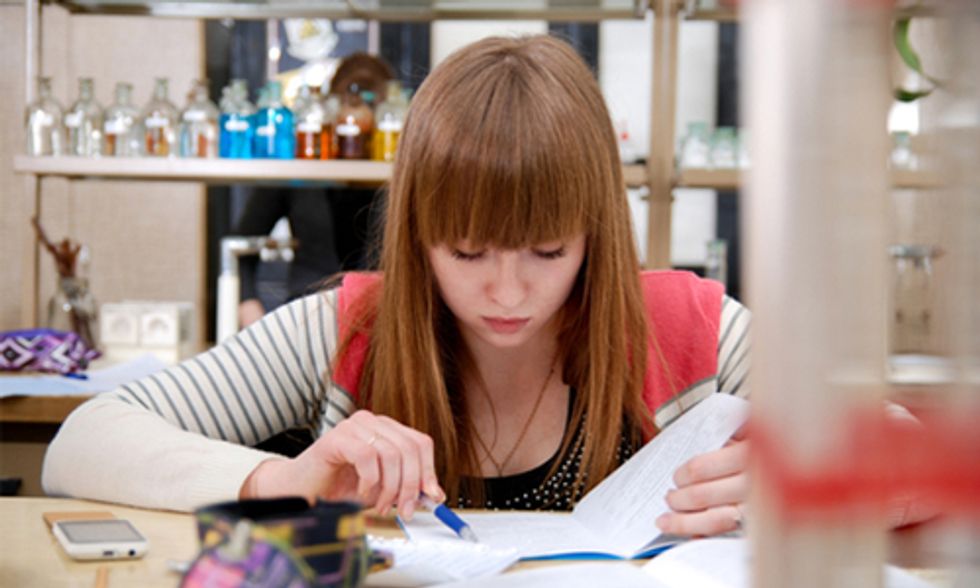 Every ten years, the Texas State Board of Education reviews its textbook standards. Controversy often swirls around the process, with conservatives demanding the inclusion of dubious information that goes against well-grounded scientific research.

Board-appointed groups of citizens have been reviewing the standards since July, pending final adoption in November. But the first public hearing on them yesterday brought the fault lines out in the open. Climate change joined evolution as one of the main issues in the spotlight, and a target for the anti-science crowd as they attempt to insert material in social studies textbooks that suggest the causes of climate change are still in doubt.

The review panel members included people like Probe Ministries' Ray Bohlin, an anti-evolution zealot who explained in this interview with Mother Jones why he believes carbon emissions don't cause climate change.

Ahead of the public meeting, watchdog group the Texas Freedom Network got its hands on the proposed standards and were troubled by what they said about climate change.

"One textbook goes so far as to equate arguments from a polluter-funded political advocacy group with real facts from an international science organization that won the Nobel Peace Prize in 2007," the group found.

“In too many cases we’re seeing publishers shade and even distort facts to avoid angering politicians who vote on whether their textbooks get approved,” said Texas Freedom Network education Fund president Kathy Miller. “Texas kids deserve textbooks that are based on sound scholarship, not political biases.”

It asked the National Center for Science Education (NCSE) for input on the climate change sections. No surprise: they don't agree with Bohlin. It found many troubling things in the proposed textbooks.

For instance, one of the textbooks said, “Scientists agree that Earth’s climate is changing. They do not agree on what is causing the change. Is it just another natural warming cycle like so many cycles that have occurred in the past? Scientists who support this position cite thousands of years’ worth of natural climatic change as evidence. Or is climate change anthropogenic—caused by human activity? Scientists who support this position cite the warming effect of rapidly increasing amounts of  greenhouse gases in the atmosphere.”

"The scientific debate over whether climate change is happening and who is responsible has been over for years, and the science textbooks Texas adopted last year make that clear," said NCSE's Minda Berbeco. "Climate change will be a key issue that future citizens of Texas will need to understand and confront, and they deserve social studies textbooks that reinforce good science and prepare them for the challenges ahead."

A group of more than 50 scientific organizations signed an open letter to the Texas State Board of Education, saying, "As societies of educators and scientists, we are concerned by reports that textbook reviewers unqualified in the relevant science are seeking to undermine the teaching of evolution and climate change, and that good textbooks may be revised or rejected based on these reviewers’ comments."

Texas textbook standards have nationwide impact. Because Texas has such a large public school system and such specific textbook standards, publishers often use these to prepare the materials they sell to other states.

They might also have an impact in producing a future generation of Texas politicians even more science-averse than the current one, if that's possible. Texas Congressman Blake Farenthold has called climate change "scare tactic used by groups with a political agenda," while his fellow Congressman Louie Gohmert has scoffed, "This climate change was global freezing back in the 1970s. Then global warming and then, when it quit warming, now it’s climate change." Yet another Texas congressman, Joe Barton, cited the Bible as his science text, saying, "One would have to say the Great Flood is an example of climate change and that certainly wasn't because mankind had overdeveloped hydrocarbon energy."

They're joined by Texas Senator Ted Cruz who also mentioned "global cooling" and told CNN earlier this year, "The last 15 years, there has been no recorded warming. Contrary to all the theories that they are expounding, there should have been warming over the last 15 years. It hasn't happened." Texas' other senator, John Cornyn, disagrees, saying not only does he think climate change is happening but that it's at least partly man-made. He just doesn't think we should do anything about it.

Meanwhile, Texas agriculture commissioner Todd Staples denied science in another area, nutrition. He claimed that Austin's adoption of Meatless Mondays would deprive low-income children of their only source of protein for the day, proving that more, not less, scientifically accurate education is needed in Texas.