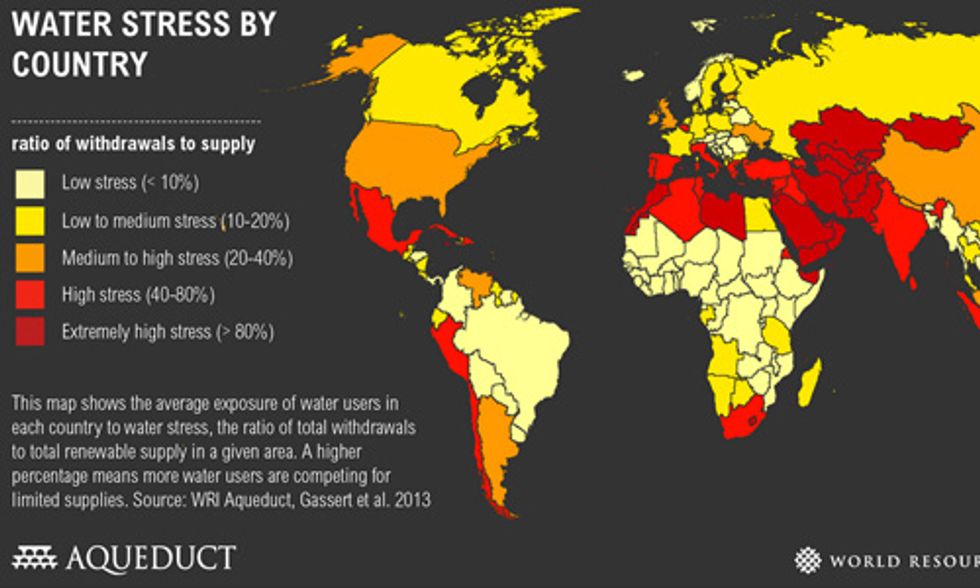 A new study by the Potsdam Institute for Climate Impact Research, published in the journal Proceedings of the National Academy of Sciences, found that climate change is likely to put 40 percent more people worldwide at risk of absolute water scarcity, due to changes in rainfall and evaporation.

Unsurprisingly, the study noted that “Expected future population changes will, in many countries as well as globally, increase the pressure on available water resources.”

With a mid-range United Nations projection of 9.6 billion people by 2050, how countries around the world manage water resources is becoming more critical with each passing day. And a changing climate is likely to play havoc with even the best laid plans.

Today, between one and two people out of 100 live in countries with absolute water scarcity (defined as less than 500 cubic meters of water available per year and per person). On average, each person consumes about 1,200 cubic meters of water each year, and even more in industrialized countries. Yet the impacts of continued population growth and increasing climate changes could bring the ratio of people living in countries with absolute water scarcity up to about 10 in 100 people.

The Mediterranean, Middle East, southern U.S. and southern China could experience “a pronounced decrease of available water;” southern India, western China and parts of eastern Africa could have an increase.

The authors of the study found that “This dwindling per-capita water availability is likely to pose major challenges for societies to adapt their water use and management.”

Just last month, the World Resources Institute (WRI) released the results from its Aqueduct water project in which it found that 37 countries face “extremely high” levels of baseline water stress. This means that more than 80 percent of the water available to agricultural, domestic and industrial users is withdrawn annually—leaving businesses, farms and communities vulnerable to scarcity.

…the world’s water systems face formidable threats. More than a billion people currently live in water-scarce regions, and as many as 3.5 billion could experience water scarcity by 2025. Increasing pollution degrades freshwater and coastal aquatic ecosystems. And climate change is poised to shift precipitation patterns and speed glacial melt, altering water supplies and intensifying floods and drought.

Greater conservation and more efficient water systems (especially for industrial agriculture) will help. Also incorporating traditional and indigenous methods of water storage and usage that is applicable to each community and/or region will be needed. But what is most needed is global action on climate change to reduce global greenhouse emissions and thereby put the world on a path toward a more sustainable future.

There is too much at stake, and water is too precious of a resource to not implement policies to help countries, communities and families adapt to the coming changes.