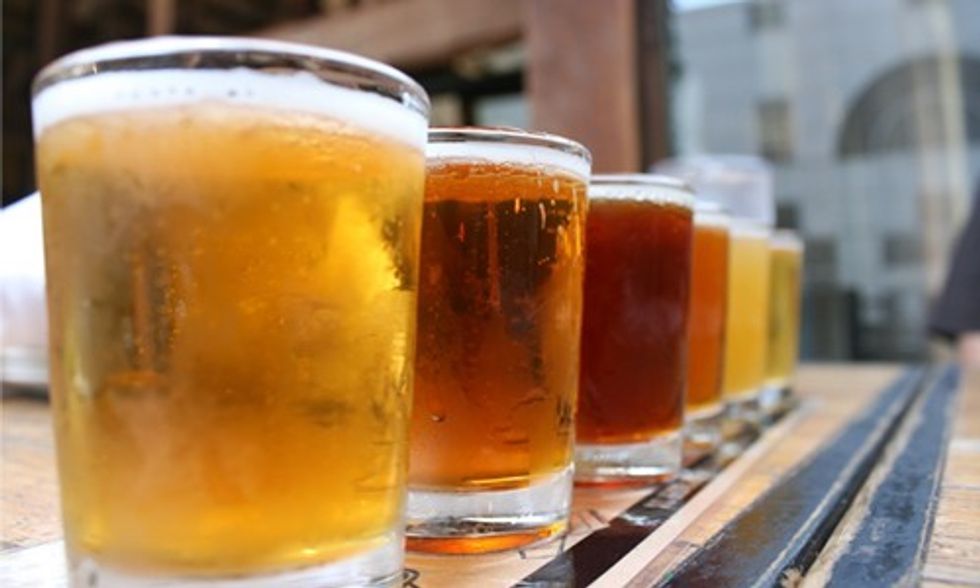 As any beer lover knows, hops are a key ingredient in beer. But now, climate change poses a threat to hops production, according to the National Oceanic and Atmospheric Administration (NOAA).

The U.S. is the second largest hops-producing country in the world. But almost all of the nation's commercial hopyards are located in just three states: Washington, Oregon and Idaho. Washington alone produces nearly three-quarters of all the nation's hops. In 2015, an estimated 71 percent of U.S. hops were grown in Washington, 15 percent in Oregon and 11 percent in Idaho, according to data from Hop Growers of America.

Growers in states across the U.S. are increasingly planting commercial hopyards to meet the craft beer industry's voracious demand. But all of the other 47 states' hops acreage make up less than 3 percent of total hops acreage in the U.S.

Simple Earth Hops farm in Wisconsin is one of the growing number of commercial hops farms outside of the Pacific Northwest.

The concentration of hops production goes even further because within the state of Washington, the Yakima Valley is the primary hops-growing area.

The Yakima Valley lies in the rain shadow of the Cascade Mountains with an average annual rainfall of 7 to 10 inches. Its summers are hot and dry, making the region dependent on winter snowpack for its water supply. Hops production has flourished in Yakima Valley, in part, because of its favorable climate, but according to NOAA, the extreme heat the region experienced last year impacted yields.

Washington, Oregon and Idaho were among the states with the warmest June 2015 on record. Oregon and Washington both set records for warmest year to date. Image credit: NOAA

2015 shattered global temperature records, and Washington, in particular, experienced record hot and dry conditions. In May, Washington Gov. Jay Inslee declared a drought emergency after state officials recorded the lowest snowpack ever for the state. Washington also had a brutal wildfire season in 2015 with the massive Okanogan Complex surpassing last year’s record-setting Carlton Complex to become the largest fire in the state’s history.

The 2015 National Hop Report from the U.S. Department of Agriculture found that growers suffered crop loss in some varieties, such as Willamette and Centennial, which don't hold up well in extreme heat.

“Early season aroma varieties, particularly European noble types, were most impacted by the extreme heat during the latter half of June, as bloom was underway,” Ann George, executive director of the Washington Hop Commission, told NOAA. Still, despite the record drought and heat, Washington produced a record number of hops—59.4 million pounds, according to NOAA.

It was not just California that suffered through a record-breaking drought last year. Oregon and Washington experienced severe to extreme drought conditions, as well.

The hops industry is struggling to keep up with demand as it is (There were major shortages of popular hops varieties in 2008 and 2012). Now a warming climate is increasingly threatening supplies.

Climate models project last year's unusual warmth will be the “new normal” in the decades to come, Guillaume Mauger, a research scientist with the University of Washington’s Climate Impacts Group, told NOAA. And while total precipitation isn't expected to change much, more and more winter precipitation will fall as rain rather than snow, decreasing snowpack and threatening the area's water supply.

Oregon and Idaho are in a similar situation. Both states experienced record low snowpack, drought conditions and extreme heat. And other hops-producing regions are taking a hit too. Germany, which produces more hops than anywhere in the world, saw a 26 percent decrease in hops production last year due to drought, according to NOAA. This undoubtedly has those in the industry worried because the U.S. and Germany each contribute about one-third of global hops production.

Water scarcity is also a significant problem for the beer industry as water makes up 90 to 95 percent of all beer—yes, even craft beer. California brewers told NPR that the state's drought has forced them to rely more and more on groundwater due to restricted river water supplies. And mineral-heavy groundwater supplies can produce unpleasant tastes in beers, the brewers lamented. One brewer described it as "like brewing with Alka-Seltzer.”

It was already bad enough that climate change will diminish worldwide supplies of chocolate, wine and coffee. Now, beer too.