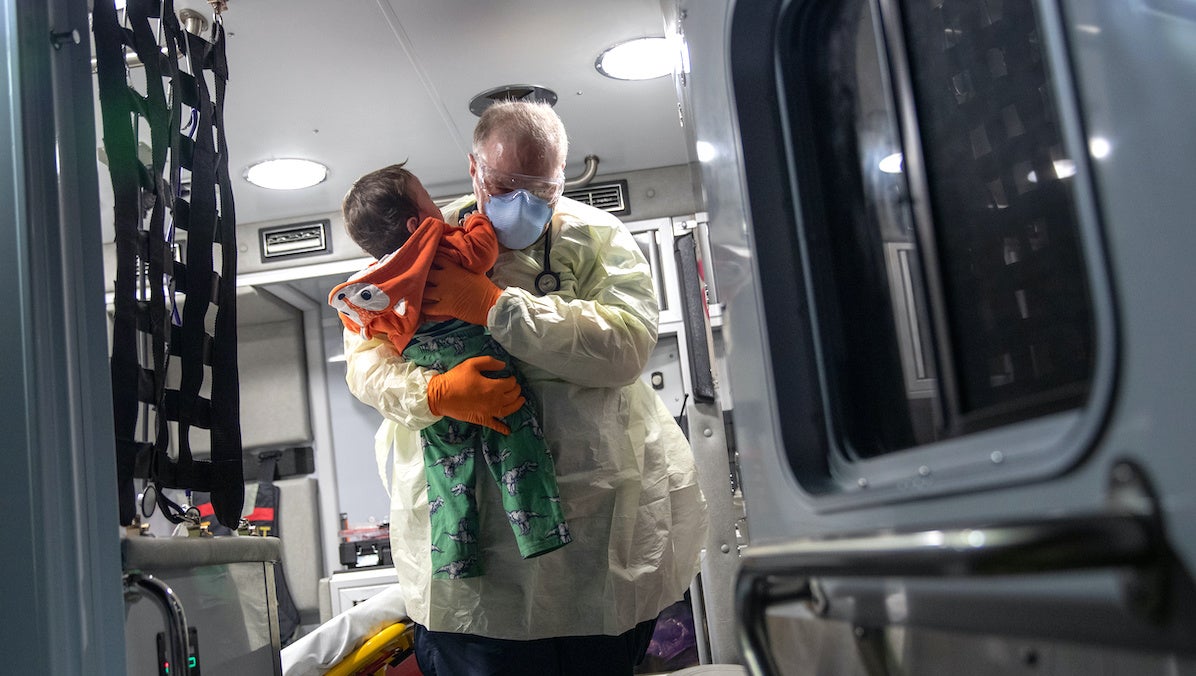 A paramedic carries a 10-month-old boy with a fever to Stamford Hospital on April 04, 2020 in Stamford, Connecticut. Photo by John Moore / Getty Images

A new health condition seemingly related to COVID-19 related symptoms has appeared in more than 100 children living in New York and New Jersey, prompting health officials to ramp up awareness campaigns and spur new health protocols in response to the mysterious disease.

At least 102 children in New York and 18 cases in New Jersey have been reportedly connected to the newly named “pediatric multi-system inflammatory syndrome (PMIS),” reports NBC. At least three children have died in connection with the disease as another two deaths are currently under investigation. More than a dozen states have confirmed similar cases.

PMIS is a new health condition believed to be related to COVID-19, the severe respiratory disease caused by SARS-CoV-2, but experts say that the connection is “still not clear.” Like other inflammatory conditions, such as toxic shock syndrome and Kawasaki disease, childhood cases of PMIS are linked to issues with the heart and other organs and can sometimes require hospital support in an intensive care unit.

“So far, from what we understand, this is a rare complication in the pediatric population that [doctors] believe is related to COVID-19,” New York State Health Commissioner Dr. Howard Zucker told The New York Times.

Although uncommon, PMIS can be life-threatening. Guardians are urged to call a doctor immediately if their child becomes ill and has a continued fever of 100.4 degrees Fahrenheit (38 degrees Celsius) lasting several days, along with other symptoms such as diarrhea, vomiting, swollen hands and feet, or a red tongue that “looks like a strawberry.” PMIS is not believed to be contagious, but its connection to COVID-19 suggests that a child may be infected with the virus or another underlying infection that may be contagious.

“Until we know more, hospitals in NYC that are treating children with PMIS are taking the same precautions they take for patients with COVID-19,” writes the New York City Department of Health.

European pediatricians first reported a rising number of COVID-19 cases connected with a similar inflammatory disease in April, reported IFLScience. At the time, doctors reported that it was unclear whether it was related to the novel coronavirus, and that there “may be another as yet unidentified infectious pathogen associated with these cases.” The Centers for Disease Control and Prevention (CDC) says that it is studying the disease but at the time does not know how prevalent it is or what its relationship to SARS-CoV-2 may be.

“As more data are emerging, CDC is working with the Council of State and Territorial Epidemiologists and other domestic and international partners to better understand and characterize this new syndrome, its prevalence and risk factors for it; and to develop a case definition that will allow us to keep track of it,” the agency told USA TODAY through a spokesman.

Kawasaki disease is an acute febrile illness that typically infects children under the age of five, according to the CDC. Clinical signs often overlap with toxic shock syndrome to include fever, rash, as well as redness of the mouth and throat.

A new study published Wednesday in The Lancet “provides the strongest evidence yet that the syndrome [Kawasaki disease] is linked to the coronavirus,” The New York Times reported. Doctors in Bergamo, Italy “aimed to evaluate incidence and features of patients with Kawasaki-like disease diagnosed during the SARS-CoV-2 epidemic,” according to the report. After studying 15 girls and 14 boys age 7 and younger, the doctors concluded: “The SARS-CoV-2 epidemic was associated with high incidence of a severe form of Kawasaki disease. A similar outbreak of Kawasaki-like disease is expected in countries involved in the SARS-CoV-2 epidemic.”

NPR reports that most children with PMIS have either tested positive for coronavirus infection or for its antibodies, which suggests a prior infection. There is currently no cure for PMIS but doctors say that cases are being treated with different therapies and drugs that help reduce the body’s immune response, prompting the inflammatory syndrome in the first place. Although it remains unclear whether the condition is related directly to COVID-19, experts recommend taking similar precautions as well as practicing proper hand hygiene and social distancing measures.