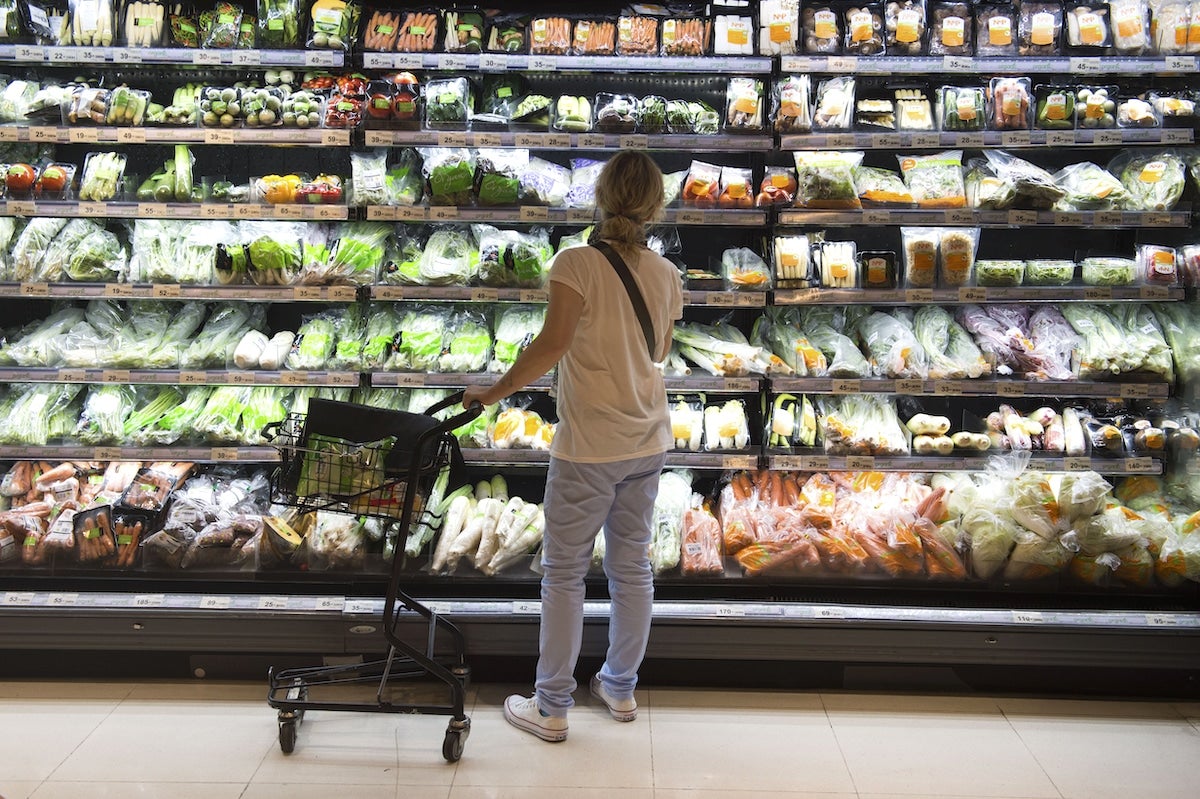 A shopper looks at a shelf of packaged foods at a grocery store in Bangkok, Thailand. ROMEO GACAD / AFP via Getty Images

As food processing and packaging has become increasingly more complex, the question, “What’s in our food?” has become harder to answer. A team of international scientists has compiled a new database of 3,240 potentially harmful chemicals that have been measured in “food contact materials (FCMs),” like packaging and processing equipment, utensils and reusable food containers. Sixty-five percent of these chemicals had not previously been known to be used in FCMs, according to a report released by the Switzerland-based nonprofit Food Packaging Forum.

The report, “Systematic evidence on migrating and extractable food contact chemicals: Most chemicals detected in food contact materials are not listed for use,” was published in the journal Critical Reviews in Food Science and Nutrition.

“Food packaging is important for today’s globalized food system, but food contact materials (FCMs) can also be a source of hazardous chemicals migrating into foodstuffs. Assessing the impacts of FCMs on human health requires a comprehensive identification of the chemicals they contain,” the report said.

In compiling the database, the scientists used information from 1,210 studies and found that 2,881 FCMs had been found previously, which they organized into six FCM groups, including plastics, metal, paper and board, glass and ceramic, “multi-materials” and what they categorized as “other FCMs.”

Many of the chemicals that make it into our food, like PFAS, phthalates, bisphenols and heavy metals, are known to be harmful, but not a lot is known about many of the others, including how they affect people.

Co-author of the report Pete Myers, who is the founder of nonprofit advocacy group Environmental Health Sciences and chief scientist of the organization, said the chemicals are sometimes added to food intentionally by manufacturers, but other times their presence is unintended, reported The Guardian. The problem is, the unknown chemicals are ending up in the bodies of consumers.

“If we don’t know what it is, we don’t know its toxicity,” said Myers, as The Guardian reported. “The mix of chemicals is just too complicated to allow us to regulate them safely.”

Some of the chemicals are what are called oligomers, molecular by-products of the plastics production process that are made up of smaller building blocks known as monomers, reported myScience.

“It’s difficult to look for them because they aren’t deliberately added – they are unexpected by-products,” said molecular and systems toxicologist professor Alex Odermatt of the Department of Pharmaceutical Sciences at the University of Basel, who was a co-author of the study, as myScience reported. Odermatt said that, because of this, their concentration and level of safety wasn’t known.

Odermatt said that understanding the behavior of oligomers is still in the early stages.

“The assumption was that because they are larger molecules, it’s harder for them to enter the human body, or they are rapidly broken down into their monomers in the body – but this hasn’t been proven yet,” Odermatt said, as reported by myScience.

Associate professor in the Department of Environmental Science, Policy, and Management at UC Berkeley Alastair Iles, who wasn’t involved with the study, said that many of the unidentified chemicals are likely to be unhealthy, The Guardian reported.

“The report only underlines our gross ignorance when it comes to the chemicals that people are being exposed to every day,” said Iles, as reported by The Guardian. “If we didn’t know that there were so many chemicals in packages, what does that say about our knowledge about chemical risks?”