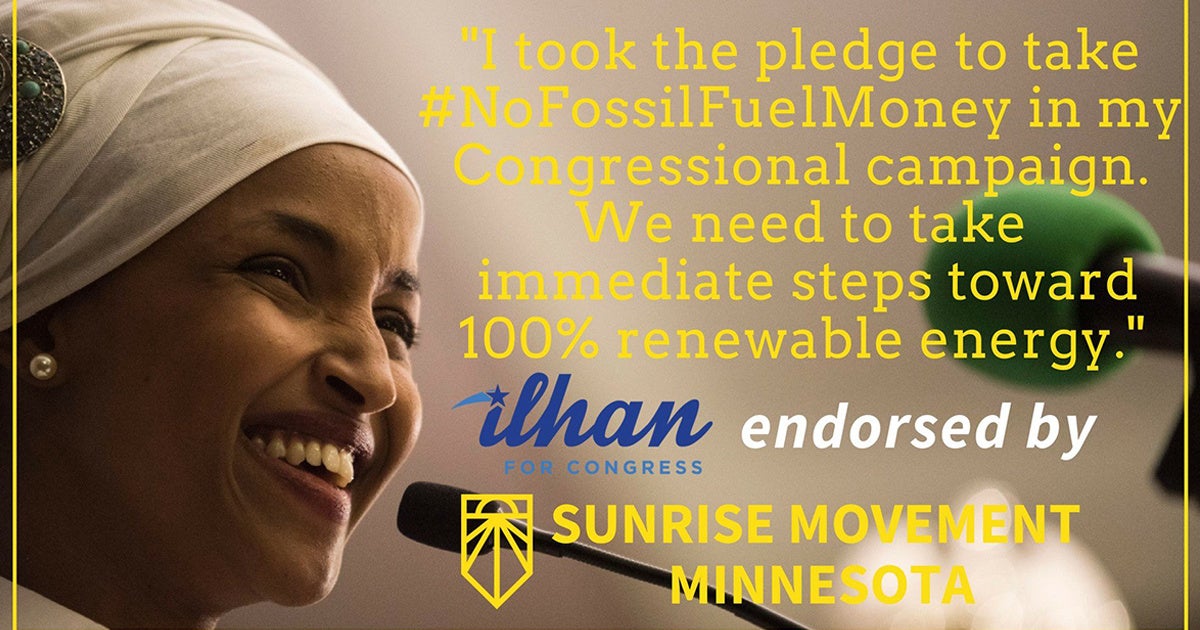 With record-breaking hurricanes, furious wildfires and an ominous report from the United Nations that forecasts catastrophic climate change, it’s more important than ever to vote for leaders who are defenders of the environment.

Thankfully, we have candidates running for all levels of government who will take a stand on these critical issues and are promising ambitious climate policies if elected.

In fact, more than 1,200 elected officials and candidates running in local, state and federal elections are standing up to Big Oil and Gas and have taken the No Fossil Fuel Money Pledge.

A number of high-profile candidates and incumbent lawmakers have joined the movement. This includes Sen. Bernie Sanders of Vermont; Rep. Beto O’Rourke—Ted Cruz’s foe for Senate in Texas; New York’s Alexandria Ocasio-Cortez, who is on track become the youngest ever woman elected to Congress; Florida gubernatorial candidate Andrew Gillum; and Randy “Ironstache” Bryce, of House Speaker Paul Ryan’s Wisconsin district, who is trying to flip the seat blue.

The list also includes candidates who lost their bids, i.e. Cynthia Nixon, who ran for governor of New York.

“Taking the pledge means that a politician and their campaign will adopt a policy to not knowingly accept any contributions over $200 from the PACs, executives, or front groups of fossil fuel companies—companies whose primary business is the extraction, processing, distribution, or sale of oil, gas, or coal,” the pledge website touts.

The No Fossil Fuel Money Pledge is a pointed effort against the Democratic National Committee, which decided in August to reverse a ban on fossil fuel donations.

You can use this search tool to see if your election candidates have taken the pledge.

Thank you, Charles Gallia, in race 4 OR State Senate, for joining 1200 other candidates in US pledging to take NO money from the fossil fuel industry, & for taking on a major climate denier. #nofossilfuelmoneyhttps://t.co/WtyYYuslDD
https://t.co/gVrQh1wQHu pic.twitter.com/7uYwrFz22u

The Sunrise Movement, a politically-minded organization of young people uniting to stop the climate crisis, has endorsed a full slate of candidates who have rejected fossil fuel cash and promise to fight climate change.

For instance, they’ve united behind Minnesota candidate Ilhan Omar, who is poised to become the first Somali-American elected to Congress.

“Ilhan has fiercely backed a moratorium on new oil and gas infrastructure, especially when it comes to the Line 3 pipeline. She’s promised to stop tax loopholes and giveaways to fossil fuel executives, if elected to office and will support legislation to create good-paying, union jobs in the clean energy sector instead,” the group writes.

There are other tools that environmental voters can use before heading to the polls. As Vox reported, Vote Climate US PAC has created a climate change voter’s guide for House and Senate races that’s based on what incumbents and challengers have said they’ll do to address Earth’s rising temperatures, from a carbon tax and their stated position on climate change.

You’ll be unsurprised to find that the vast majority of the so-called “climate heroes” in the guide are Democrats.

“We all know that there are differences between Republicans and Democrats on the issue, but to me what was stunning was the extent of the divide between the parties,” Karyn Strickler, president of Vote Climate US PAC, told Vox. “What this demonstrates is that climate politics are overwhelmingly driven by party.”

The Sierra Club has also issued a voter guide and made endorsements for candidates and ballot measures. The environmental group has even created a personalized ballot based on your address.

There are many reasons to head to the polls on or before Nov. 6. Saving the environment should be one of them.

There's never been a better time to be a #ClimateVoter and fight for a brighter future. Are you in?https://t.co/GhtDYWCEBj