Cancer in the Ransom Note 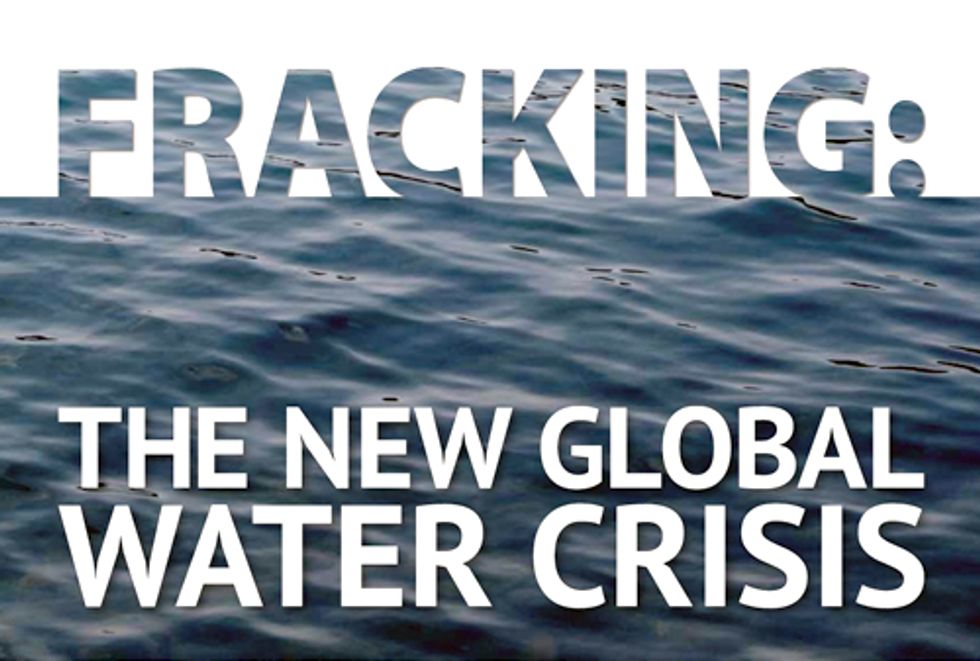 Fracking is a hostage exchange program. Only the carcinogens go free.

"Shale development has been a nightmare for those exposed to the resulting pollution."—Food and Water Europe, Fracking: The New Global Water Crisis Fact Sheet

Why should cancer patients in the U.S. and Canada—and those who love or diagnose them—care about a report about looming water shortages in distant countries such as South Africa and Argentina?

The report is Fracking: The New Global Water Crisis. Written by Food and Water Watch, it documents the many ways in which the technology called hydraulic fracturing threatens the world's vital water resources. That's because fracking—when combined with horizontal drilling—uses prodigious amounts of water as a high-pressure hose to blow apart bedrock. The goal is to liberate the wisps of oil or bubbles of gas trapped inside.

The gas or oil flows up and out of the bore hole. But in the process, the water used to free it becomes caught within the fractured rock. Entombed a mile or more below the water table, this water is removed from the Earth's hydrologic cycle and now resides in the geological underworld. Permanently.

It will never again fall as rain. Or irrigate a field. Or cap a mountain with snow. Or flow through an aqueduct to a city full of people with sinks and bathtubs and teakettles and toothbrushes.

In essence, fracking is a hostage exchange program—to release fossil fuel from the subterranean grip of limestone or shale, water takes its place.

To be sure, some portion of the water used for fracking does return to the surface once the pressure is released. But the flowback water is now contaminated in ways that make it undrinkable. And the technology to make it pristine again does not exist. So it's ruined.

Just to review—Fresh water is not the 99 percent. Most of the planet's water is salty. A mere thimbleful—one percent—of the world's aquatic resources is available to us as liquid, drinkable water. Global climate change is quickly siphoning away that slim amount, putting us on track for widespread water shortages.

Meanwhile, millions of gallons of water are required for each horizontally fracked well. And fracking is under way or under consideration in nations all around the world, including Argentina, China, Poland and South Africa.

According to the new report from Food and Water Watch, fracking will only exacerbate the global water crisis and, were this technology to continue its advance across the world, could actually drive it.

The whole situation sounds urgently concerning. But maybe not urgently concerning in a personal way, especially if you are leading an overscheduled, complicated life full of other things to worry about. For example, if you are waiting for results from the last biopsy, or fasting for a colonoscopy, or fighting with your insurance company (and I myself have done all three in the last month), Fracking: The New Global Water Crisis might not rise to the top of your reading list.

But it should. Because woven throughout its carefully footnoted pages as a thoughtful subplot is a description of the human cancer risks posed by extreme fossil fuel extraction. It's one of the best summaries I've seen.

Some of the cancer risk from fracking comes from the thousands of gallons of toxic chemicals that are added to the millions of gallons of fracking water to make it slick or to kill off bacteria. Indeed, potential carcinogens make up 25 percent of the chemical additives used in fracking operations. Sometimes, through leaks, blow-outs, or surface spills, these chemicals migrate into water not intended for fracking.

As detailed in the report, fracking has been implicated in the contamination of surface and groundwater supplies across the U.S. In Pennsylvania, more than 8,000 gallons of fracking fluid containing a suspected carcinogen spilled into a waterway. In Parker County, Texas, fracked gas wells poisoned a drinking water aquifer with benzene and methane. Likewise, in Pavillion, Wyo., the U.S. Environmental Protection Agency found benzene in groundwater and wells. Benzene exposure is strongly associated with childhood leukemia.

Think about that the next time you're asked to donate to the Make-A-Wish Foundation.

Some of the cancer risk from fracking comes from the release of naturally occurring chemicals found deep in the earth. One of them is radium-226, which is as radioactive as its name implies. Of more than 240 fracked gas wells in Pennsylvania and West Virginia, almost three-fourths produced wastewater with elevated levels of radiation.

Mull that over the next time you're glancing at the pamphlets on breast cancer in your gynecologist's office and encounter a phrase like exposure to ionizing radiation increases your risk for breast cancer.

Bromides are another naturally occurring substance unearthed by fracking. The cancer risk here is created when fracking wastewater is run through sewage treatment plants, enters rivers and streams, and then is subsequently chlorinated for drinking water downstream. The bromides combine with organic matter to create brominated trihalomethanes, which are well-described carcinogens linked to both bladder and colon cancer.

Ponder that the next time you prep for a colonoscopy or climb up on the urologist's table for a cystoscopic exam.

Carcinogens can also evaporate from frack wastewater and become air pollutants. When volatile organic chemicals, such as benzene and formaldehyde, combine with diesel exhaust from the heavy machinery and fleets of tanker trucks that haul the water to the well sites, the result is smog—ground-level ozone—which can travel hundreds of miles on prevailing winds. Ozone is not a carcinogen per se, but animal studies show that, because it creates inflammation, it can raise the risk for metastases. Moreover, diesel exhaust is, all by itself, a probable lung carcinogen.

Meditate on that while lying in the MRI machine.

As the new fracking report makes clear, it's extremely difficult to establish links between individual diagnoses and particular chemicals used, released or created by fracking operations. Nevertheless, when carcinogens are released into the common environment, an ongoing public health and environmental experiment is set in motion, and people are placed in harm's way, often without their consent. Moreover, as the report goes on to say, "many of these problems are inherent to the process and cannot be avoided through regulation."

On this basis, Bulgaria and France have both enacted nationwide bans on fracking. Vigorous public protest contributed to both of these decisions and led the French environment minister to concede, "We have seen the results in the U.S. There are risks for the water tables and these are risks we don't want to take."

As a bladder cancer survivor, I don't want to take these risks either. So here's where cancer patients come in. Even with one hand tied to the chemotherapy drip, we can write letters and make phone calls. All together, we are a mighty coalition with a towering pile of medical bills. We can send a powerful message. Here's an example:

Fracking, a leading contributor to The New Global Water Crisis, threatens to exacerbate The Old Global Cancer Crisis, which is a really expensive problem (see attached invoice from my radiologist). We cancer survivors, who know something about the preciousness and fragility of life, hereby declare that the exchange of life-giving water for death-dealing fossil fuel is unacceptable. It's holding us all hostage.

We do not consent to the delivery of our drinking water into the radioactive bowels of the earth. We will not negotiate with those who think that additional cases of leukemia, bladder, colon and lung cancer are just part of the price you pay for gas. Tear up the ransom note. Find another energy plan. Set a sustainable course.

For extra emphasis, place the call from your oncologist's office. Hit the send button while the IV drip is being changed. Add a plastic hospital wrist bracelet to the envelope. Or a collage constructed of ultrasound images. Or a lock of hair—the one that fell out in the shower shortly after the treatments began. Speaking out takes many forms.