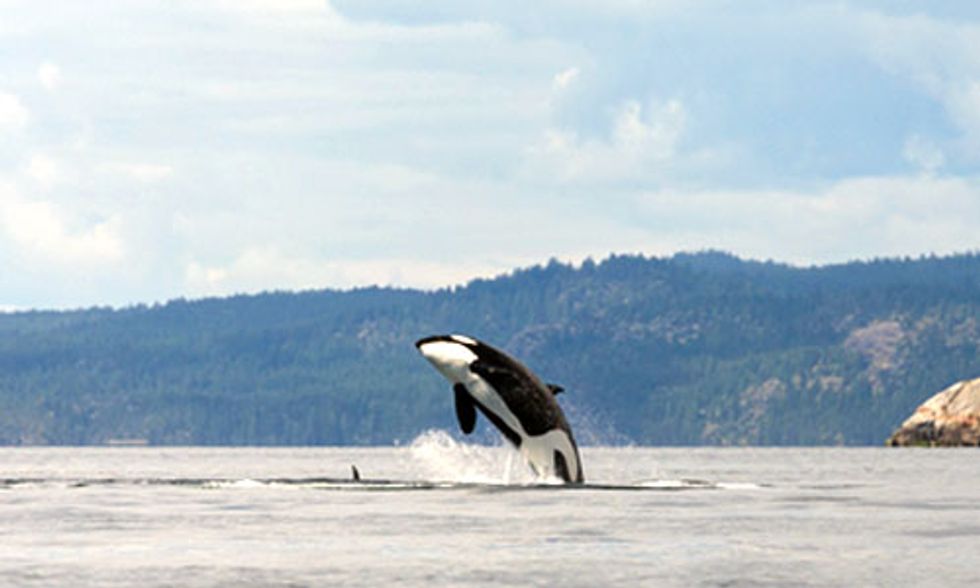 Orca whales—those beautiful, charismatic megafauna—are being invoked by California environmentalists to draw attention to those who often do not get mentioned in the battle over the state's water resources. The decades' old battle, which has intensified dramatically with the exceptional drought, pits Southern California against Northern California and water-starved cities against Central Valley farmers. But all the other non-human species of California—which has the highest species diversity and highest rate of endemic species (ones only found in a certain geographical area) of any U.S. state—need water too.

Southern Resident Orcas, which can be found mostly from Puget Sound down to the San Francisco and Monterrey bays, are the only orcas that are designated as endangered.
Photo credit: Shutterstock

Conservationists are using the decline in the Southern Resident Orca population as "a powerful symbol of how California's water usage can have an impact far beyond our faucets and farms," says KCET reporter Conor Knighton. In a segment Wednesday, Knighton examined why the Southern Resident Orcas, which can be found mostly from Puget Sound down to the San Francisco and Monterrey bays, are the only orcas that are designated as endangered.

And the reason why they are endangered highlights the interconnectedness of our ecosystems. Rep. Devin Nunes (R-CA) calls the delta smelt, "a stupid little fish," but the two-inch-long fish plays a vital role in its ecosystem. The delta smelt along with the Chinook salmon make up a main part of the orca whale's diet. And both of these fish, and thus the Southern Resident Orcas, may soon be extinct due to California's historic drought and the state's water management policies. "The saying is 'no fish, no blackfish.' If they don't have a good food supply, the future isn't there," Alisa Schulman-Janiger, of the California Killer Whale Project, tells Knighton.

"Years of drought and diversion have changed the ecologic makeup of the San Francisco Bay Delta," where Southern California gets one-third of its water from, says Knighton. Salmon depend on enough water in the Bay Delta to keep their population healthy, but with the extreme drought, much of that water is being diverted to cities and farms.

Environmental regulations have been put in place to protect these fish species, but some claim that the laws are too costly and ineffective. And Rep. Nunes is unsurprisingly not a fan of saving some "stupid little fish."