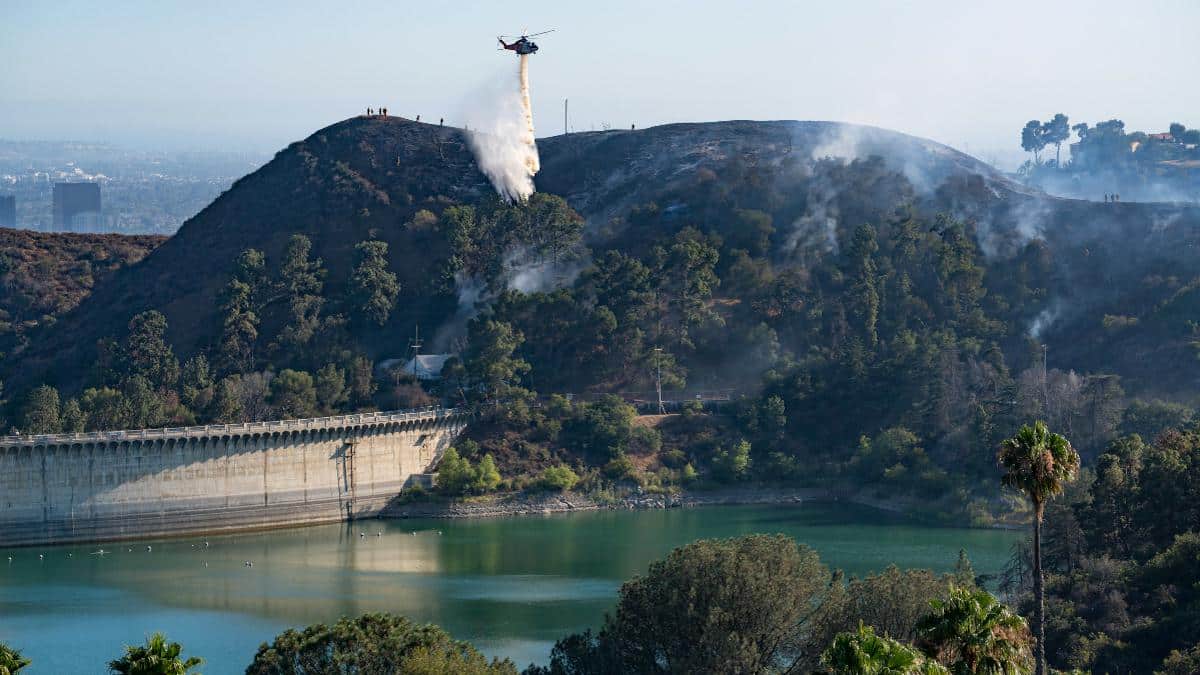 A wildfire burns in the Hollywood hills on July 19, 2016 in Hollywood, California. AaronP / Bauer-Griffin / GC Images

California faces another “critically dry year” according to state officials, and a destructive wildfire season looms on its horizon. But in a state that welcomes innovation, water efficacy approaches and drought management could replenish California, increasingly threatened by the climate’s new extremes.

The state’s largest reservoirs – responsible for maintaining the state’s water supply throughout the year – also experienced low levels this year, storing only about 38 percent and 68 percent of their capacity, according to The Guardian.

“With below-average precipitation across the state, California’s reservoirs are starting to see the impacts of a second consecutive dry year,” said Sean de Guzman, the department’s chief of snow surveys and water supply forecasting, according to The Guardian.

These effects are being felt across the state. During the city’s wettest months of December, January and February, L.A. received just 2.44 inches of the expected 3.12 inches of rain, the Los Angeles Times reported. At the same time Northern California remains in one of the worst two-year rain deficient since the Gold Rush of 1849 – its precipitation at only 30 percent to 70 percent of a normal year, The Guardian reported.

Three to five winter storms supply California’s snowpack and reservoirs with water. But the state’s dependency on these few winter storms makes it especially vulnerable when they occur less frequently, The Guardian reported.

“In years where you miss out on one or two of those, you’re probably going to struggle to get close to normal,” John Abatzoglou, a climatology researcher at the University of California, Merced, told The Guardian, who added that the state is increasingly living in extremes – either experiencing abnormally heavy rain or no rain at all. “We’re banking on a miracle March or awesome April to dig out of this hole… In all likelihood, we’re going to end the water year with another dry year.”

The dry winter not only invites a destructive wildfire season but comes with a heavy price tag for the state’s agricultural industry. Between 2012-2016, for example, the state experienced a drought that cost .7 billion in losses for the industry, and more than 18,000 lost jobs, The Guardian reported. This drought also killed about 102 million forest trees.

“Our state’s water future remains uncertain due to the variability in precipitation and changing climate,” Guzman said, according to the Los Angeles Times. Now more than ever, new approaches to water efficacy are necessary. Fortunately, new ideas are plentiful in a state that is often celebrated for its sustainable policy.

One solution, for example, could include paying Californians to conserve water as a cost-effective way to reduce energy consumption, Sammy Roth, a staff writer for the Los Angeles Times wrote in the newsletter Boiling Point.

Based on research that looked at what happened if the Los Angeles Department of Water and Power paid people to use less electricity rather than less water, the researchers concluded “that paying for water conservation can actually be a more cost-effective way to slash energy consumption than paying for energy conservation,” Roth added.

In a drier, hotter and rapidly changing climate, that brings new weather extremes to the state each year, water conservation is imperative for California and the nearly 40 million that call it home. “It’s more critical than ever that Californians adopt sustainability, embrace new approaches and emerging technologies and work together to save water for a secure future,” Guzman added, according to The Guardian.