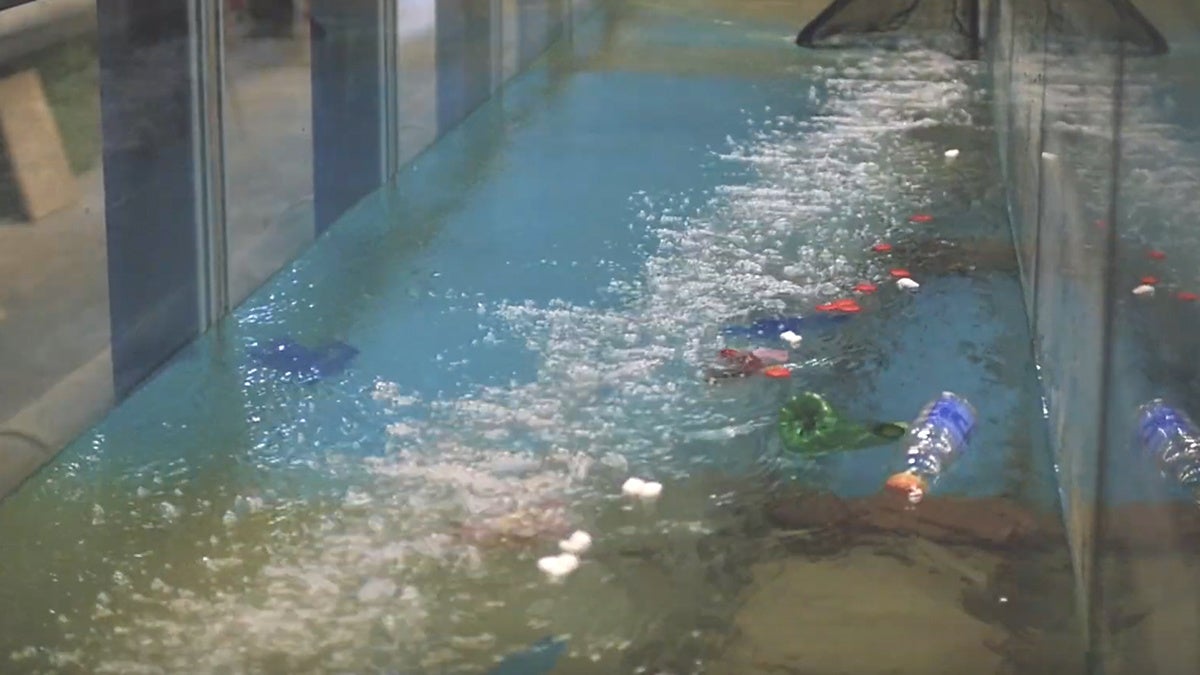 Preliminary tests of the bubble barrier have shown it to be capable of ushering 80 percent of the canal's plastic waste to its banks. The Great Bubble Barrier / YouTube screenshot

The scourge of plastic waste that washes up on once-pristine beaches and finds its way into the middle of the ocean often starts on land, is dumped in rivers and canals, and gets carried out to sea. At the current rate, marine plastic is predicted to outweigh all the fish in the seas by 2050, according to Silicon Canals.

Now, a Dutch start-up has launched a barrier device to remove plastic from canals and rivers while allowing fish to swim right through, as The Guardian reported.

The Great Bubble Barrier, an innovative start-up, teamed up with the Amsterdam municipal government and the regional water board to launch their device last week in Amsterdam’s Westerdok Canal, at the tip of city’s historic canal belt. The canal is an ideal starting point since it empties into the IJ river, which feeds the North Sea Canal and then the North Sea, as Silicon Canals reported.

“This is an important milestone,” said Francis Zoet, co-founder of The Great Bubble Barrier start-up, as DutchNews reported. “This is the first project that is going to stop plastic from ending up in the sea.”

The device consists of a pipe nearly 200 feet long that is punctured with holes and laid at the bottom of the canal. It sits at the canal bed on a diagonal line. Compressed air is pumped into the pipe, which then forms bubbles as it leaves. Since it is positioned diagonally, pieces of plastic are pushed toward the side of the canal by the bubbles. Then a floating platform captures the litter, as DutchNews reported.

Preliminary tests of the project, which has taken three years, show that the device is capable of ushering 80 percent of the canal’s plastic waste to its banks. Furthermore, it works 24 hours a day and does not interfere with shipping or wildlife, according to The Great Bubble Barrier.

“More than two-thirds of plastics in the ocean comes out of rivers and canals – so if you have to intercept it, why not do it in the rivers?” said Philip Ehrhorn, co-inventor of the technology, as The Guardian reported. “You can’t put a physical barrier in a canal: it has to be open for wildlife and recreation.”

The Great Bubble Barrier will supplement current cleanup efforts in Amsterdam. Each year, a team of five garbage boats removes nearly 92,600 pounds of trash from the city’s waterways, but small pieces of trash and plastic at the bottom of the canals simply slip through the nets.

“Plastic in our water is becoming an increasing problem [and] has profound effects on the quality of our water and therefore on everything that lives in or near the water,” said Sander Mager, a board member of The Great Bubble Barrier, at the launch, as DutchNews reported. “This is precisely why it is important for the water management board to collaborate intensively with others to make a stand against this socially urgent problem.”

The trash collected by The Great Bubble Barrier will be collected separately from what the garbage boats collect. The plastics action group Schone Rivieren, which translates to Clean Rivers, will analyze the waste.

“Amsterdam’s canals have enormous appeal,” said Marieke van Doorninck, head of sustainability for Amsterdam council, as The Guardian reported. “But when you think of them, you don’t think about plastic bottles and bags in the water. The bubble barrier will mean fewer plastics reach the ocean, and is a step towards better regulation of our ecosystem, to the benefit of man, beast and environment.”