Fight or Flight: Will Boston Be Prepared for Sea Level Rise? 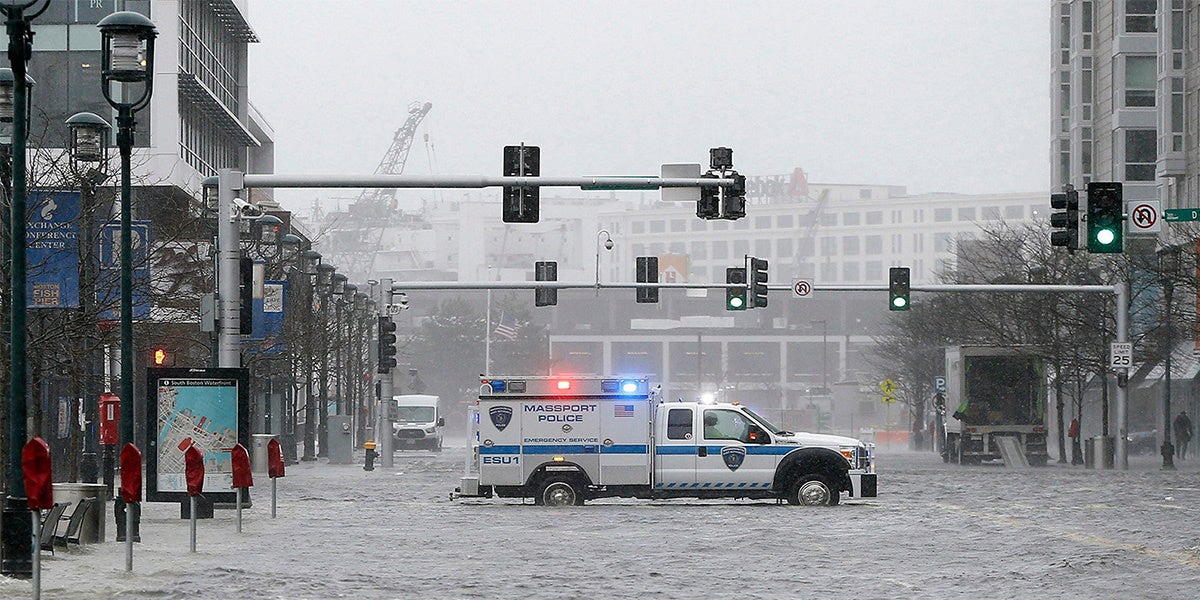 The city of Boston made news in March for receiving four nor’easters in just three weeks. The storms led to piles of snow and coastal flooding. While hurricanes may famously (and fakely) bring sharks to flooded streets, Boston’s floods really do bring swans.

That might be a sweet and peaceful picture. But the reality is that much of Boston was built on fill and subject to massive flooding. The city, known for its forward-thinking attitudes, takes the issue very seriously: Does it really want to surrender valuable real estate to mother nature?

Paul Kirshen, a professor of climate adaptation at UMass’ School for the Environment, is studying the idea of using barrier walls to protect Boston, though he stresses he doesn’t advocate for them. “We were asked to do it because people have had the idea for a couple decades,” he said. “The city thought we needed to look at the issue to see if it made sense.”

At this point, all options are on the table. The most glaring problem with the idea of barriers that would stretch from Swampscott to Cohasset, Winthrop to Hull, or from Logan Airport to the Seaport District, is that they would not prevent flooding from high tides. And Boston currently gets flooding at high tide regularly.

“As sea levels rise, that’s a bigger problem,” said Kirshen. Barriers are “only used in storm flooding, not tidal flooding.”

In addition, “we aren’t 100 percent sure of environmental impact,” he added. “We’re fairly certain it wouldn’t have major impact on harbor environment.”

There’s another problem with that, and with all of Boston’s future climate change plans: “I can’t give the exact price, but it would cost billions.”

“Shore-based [solutions] have co-benefits,” he explained. “They protect from flooding, bring neighborhoods together, create bikeways and walkways.” East Boston, for example, “doesn’t have much open space, but if you elevate the land, you get co-benefits.” Like an elevated playground, for example, or a football field on elevated land.

According to Kirshen, Boston can expect three feet of sea level rise by 2070.

The city has a handy map where you can see just how likely it is that your home will flood. You can assess risk for low-income communities, the elderly, and for people with limited English skills, and once you add those layers, the entire city of Boston looks vulnerable very quickly.

Jay Wickersham, a lawyer and president of Boston Society of Architects, said that this season’s nor’easters generated the first and third highest recorded tides in Boston history, creating an “extra sense of urgency.”

The BSA, Wickersham, said, is “heartened by how much work and analysis has been done over the last several years. In terms of understanding the problem, Boston is a leader here. We take it very seriously.”

The city already has a short-term plan in place to help mitigate water in Charlestown and East Boston that includes building a floodwall and raising a road. Carl Spector, the city’s environmental commissioner, declined to return numerous calls for comment.

“Part of what good, sound engineering and design tells us is we need layers of protection around districts like East Boston, Charlestown and South Boston,” said Wickersham. “And then sound design tells us, at all scales, we’re really going to be building and rebuilding utilities, parklands, [and] buildings.”

“Everything,” he said, “will have to be rethought in a different way.”

Sea level rise is expected to hit nine inches by 2030, Wickersham said. He pointed to Kirshen’s report and said when it is released it will “heighten the discussion.”

Twelve years passes in a flash when it comes to the municipal and bureaucratic work that needs to be done to protect a large U.S. coastal city from rapidly rising sea levels. Will Boston be prepared?

“The architectural and engineering community is starting to develop best practices,” said Wickersham, “and that will need to be hard-wired into building code and state code. Right now, those are backward-looking systems. They need to incorporate best science looking forward.”

Wickersham added, “We need systems that can provide evacuation in case of emergency, and when there isn’t a storm, they are public open space, and not just a wall against the harbor. We’ve done a great job restoring the Boston harbor ecology, and we’ve done a great job making the waterfront accessible to the public. It’s 40 miles long. We don’t want to turn our backs on that. We need to find ways to deal with the storms.”

American parks innovator Frederick Law Olmsted knew Boston was flood-prone back in the 19th century, said Chris Reed, professor in practice of landscape architecture at Harvard University Graduate School of Design and founder of Stoss Landscape Urbanism. Olmsted designed Boston’s century-old Emerald Necklace park system from mud flats to create a floodway that stretches through town. Olmsted’s idea of parks “were fully integrated systems, they were flood control that had public transport in them,” Reed said. “In the 20th century, with the rise of specialties, everything he was working with was separated out. And parks were just parks, separate.”

In the 1990s and 2000s, Reed said, there has been an effort to reintegrate these components. “Any work we do on a river has to take into account flooding and flood control, and it’s integrated in a way you don’t even know it’s there.”

Yet, the dark cloud that looms over future planning isn’t found in the weather or climate change or the plans of the present or the past.

“How are we going to pay for this? That’s the huge question,” Wickersham said. “We need to be very imaginative. We’re going to have to find public [sources], bond sources. But that’s also going to have to have private contributions as well.”

Wickersham said there needs to be “some kind of principles of fairness that goes to equity. Public support goes first to most vulnerable communities. We think at the BSA, the principles of keeping the city livable and just have to be cornerstones of how planning moves forward.” Wickersham pointed to plans for the Suffolk Downs site in East Boston, and how new designs are taking flooding into consideration, allowing the water to come in and go out.

Contrary to Wickersham and the BSA’s principles of just planning, people in the East Boston community of mostly Spanish-speaking immigrants believe those plans are exploitative and do nothing to protect them, leaving them to cope with rapid and often unchecked development and gentrification.

“Can we do this in a way that keeps the city livable and keeps the city just?” said Wickersham. The bigger question though, is “And what’s the governance? And do we need a new governance system?”

“I think first of all, this is not going to be a public works,” he said. “This will require public and private investment. It requires we think of how we plan and design the city.”

When asked why not have Amazon kick in some of the cost of protecting Boston, everyone interviewed for this story laughed. Hard. Some laughed more sinisterly than others, but only one was able to mutter, “No comment.” (Amazon is receiving $10 million in tax incentives from the city, in addition to the dowry offer for HQ2 that should make anyone with an honest heart for public service squirm.)

Bostonians, Paul Kirshen said, “have to learn to live with more frequent coastal storms than we have now. People need to decide if they want to keep the flooding at bay or move away. Wealthy people might have resources to stay. Poor people won’t.”

Until Boston figures out its new water-prone present and future, Kirshen recommends residents figure out their evacuation route. Make sure their basement is clean. Have food and water on hand. Be prepared for what might happen.

“We’re going to have to learn to live with water,” Jay Wickersham said. “We can’t wall it out.”