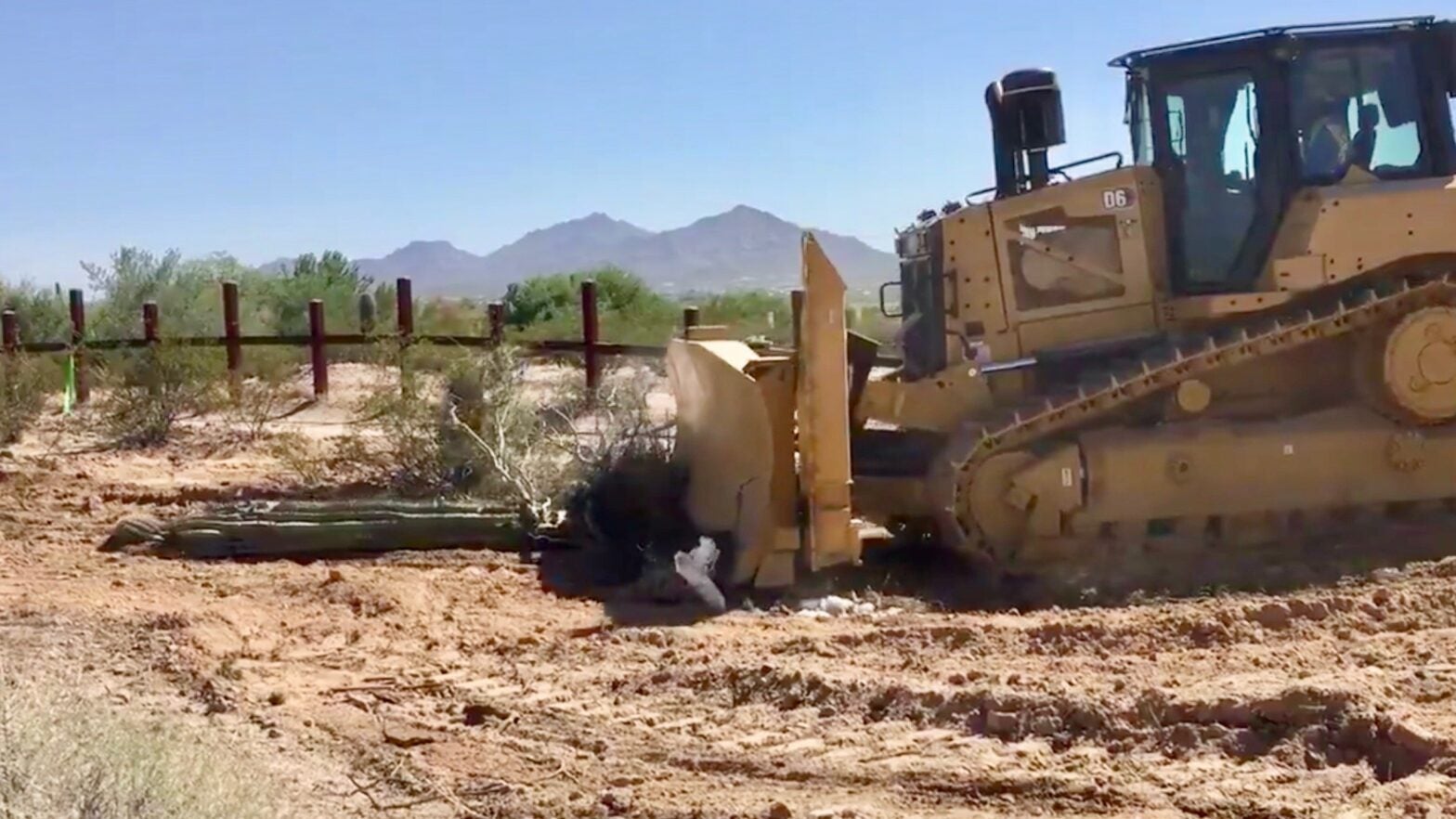 There is an outcry in Arizona after footage captured border wall construction bulldozers plowing over iconic cacti that are protected in Organ Pipe Cactus National Monument — a monument created to protect Organ Pipe and Saguaro cacti, as Newsweek reported.

The video depicts the bulldozers running roughshod over the national monument and clearing saguaros in a rush to build a costly and unnecessary wall on the U.S. southern border.

VIDEO: Saguaros are being bulldozed for the #BorderWall in Organ Pipe Cactus National Monument. Trump's reckless border hysteria is destroying our environment and killing the very species this national monument was designated to protect.

“Saguaros are being bulldozed for the #BorderWall in Organ Pipe Cactus National Monument,” wrote Laiken Jordahl, Border Lands Campaigner with the Center for Biological Diversity, on Twitter with a video of the destruction. “Trump’s reckless border hysteria is destroying our environment and killing the very species this national monument was designated to protect.”

Kevin Dahl who works at the National Parks Conservation Association shot the video. He told Newsweek that he was heartbroken and outraged by what he witnessed.

“At that point, what they were doing was destruction, not construction,” he said.

The actions Dahl witnessed stand in sharp contrast to a video posted by the U.S. Army Corps of Engineers that shows an appropriate relocation process, where a cactus is carefully removed with designated extraction tools, as opposed to a bulldozer plowing it over, according to Newsweek.

“We’re watching the destruction of Arizona’s most iconic species to make way for a useless border wall that most Arizonans oppose,” Jordahl wrote to EcoWatch.

Dahl watched the crews level saguaros and several other desert plants and then pile them up into slash piles. The destruction he witnessed was on the west side of the park where a 78-mile strip of Trump’s wall is slated to stand.

However, Organ Pipe Cactus National Monument, which runs up against the border with Mexico already has a significant amount of fencing. As the Earther blog at Gizmodo reported, that includes five miles of fence to keep pedestrians out and another 25 miles of posts that act as vehicle barriers. Earther classified the actions as “wanton destruction.”

“The Department of Homeland Security says they’re relocating cacti, but the videos we shot at the construction site tell a very different story: one of flattened earth and total devastation,” Jordahl wrote to EcoWatch. “Even if they do relocate some specimens, any remediation will pale in comparison to the severe and lasting damage done by the wall, stadium lights and enforcement zone.”

While the current fencing respects the wildlife and the migratory patterns of native desert animals, Trump’s border wall does not.

“So the wall that’s currently under construction is 30 feet tall it’s made up of a 6 foot wide steel bollards and they’re drilling 10 feet into the ground in order to set the foundation for this wall and…will stretch for almost 50 miles,” Jordahl said, as NBC Tucson reported. “So that means any migrating wildlife will be completely unable to make it around this barrier.”

The National Park Service and Customs and Border Patrol offered a statement to Newsweek that ran counter to what Jordahl said, stating that they have ensured there will be “locations for small wildlife passages within the new border barrier that would allow for the continued passage of small mammals.”

However, that seems like a dubious claim to environmentalists who have seen the Trump administration trounce over environmental regulations and manipulate environmental impact statements.

Running roughshod over the fauna in Organ Pipe Cactus National Monument presents another set of problems since the site is both a U.S. National Monument and a UNESCO biosphere reserve. The park is also sacred land to Indigenous groups like the Tohono O’odham Nation, as Dahl told Newsweek.

“The Tohomo O’odham [Nation], in their taxonomy of life saguaros are very close to humans,” Dahl told Earther. “And you know, they have a majestic presence, they are the iconic symbol of this part of the world. You know you’re someplace different when you’re in a saguaro forest.”

“Trump’s #BorderWall is under construction through the most pristine Sonoran Desert ecosystem anywhere on the planet — Organ Pipe Cactus National Monument,” he wrote. “Endangered species, Indigenous sacred sites & wilderness lands are being destroyed before our eyes.”

Trump’s #BorderWall is under construction through the most pristine Sonoran Desert ecosystem anywhere on the planet — Organ Pipe Cactus National Monument.