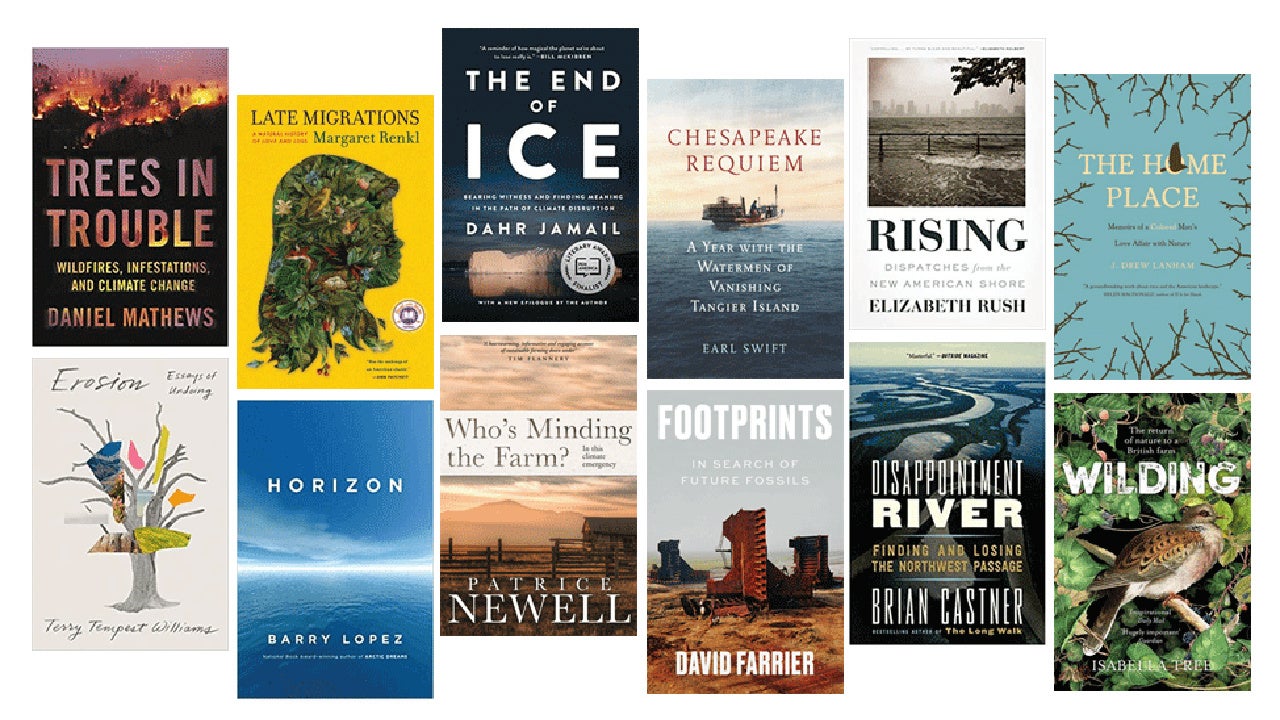 The enduring pandemic will make conventional forms of travel difficult if not impossible this summer. As a result, many will consider virtual alternatives for their vacations, including one of the oldest forms of virtual reality – books.

Both kinds of books can be found in this month’s bookshelf. And for those who hope to do some of their “reading” while on the road, socially distanced in their vehicles, each of this month’s entries includes a link to a streamable audio interview with the author.

As always, the descriptions of the titles are drawn from copy provided by the publishers. When two dates of publication are provided, the second is for the release of the paperback edition.

Editor’s Note: Yale Climate Connections thanks Scott Smallwood, senior communications manager for Southern Environmental Law Center, for suggesting this theme. Three of the online interviews linked to below were recorded for Broken Ground, the podcast produced by Southern Environmental Law Center. A fourth Broken Ground interview, with Dr. Robert Bullard, considered the founder of the environmental justice movement, can be streamed here.

From fertile soils of love, land, identity, family, and race emerges a big-hearted, unforgettable memoir by ornithologist J. Drew Lanham. Dating back to slavery, Edgefield County, South Carolina has been home to generations of Lanhams. In The Home Place, readers meet these extraordinary people, including Drew himself, who over the course of the 1970s falls in love with the natural world around him. As his passion takes flight, however, he begins to ask what it means to be “the rare bird, the oddity.” By turns angry, funny, elegiac, and heartbreaking, The Home Place is a meditation on nature and belonging, at once a deeply moving memoir and riveting exploration of the contradictions of black identity in the South – and in America today.

2. Late Migrations: A Natural History of Love and Loss, by Margaret Renkl (Milkweed Editions 2019, 248 pages, .00) / An interview with the author can be streamed here.

Growing up in Alabama, New York Times opinion writer Margaret Renkl was a devoted reader, an explorer of riverbeds and red-dirt roads, and a fiercely loved daughter. Here, in brief essays, she traces a tender and honest portrait of her complicated parents and of the bittersweet moments that accompany a child’s transition to caregiver. Ringing with rapture and heartache, these essays convey the dignity of bluebirds and rat snakes, monarch butterflies and native bees. Renkl suggests that there is astonishment to be found in common things: in what seems ordinary, in what we all share. Gorgeously illustrated by the author’s brother, Billy Renkl, Late Migrations vividly portrays the cycles of joy and grief that inscribe human lives within the natural world.

3. Chesapeake Requiem: A Year with the Watermen of Vanishing Tangier Island, by Earl Swift (Dey Street Books/Harper Collins 2018/2020, 448 pages, .99) / An interview with the author can be streamed here.

Tangier Island, Virginia, is a community unique on the American landscape. Mapped by John Smith in 1608, settled during the American Revolution, the tiny sliver of mud is home to 470 hardy people who live an isolated and challenging existence, with one foot in the 21st century and another in times long passed. But Tangier is disappearing. The very water that has long sustained it is erasing the island day by day, wave by wave; its shoreline retreats by fifteen feet a year. As the graves of their forebears are being sprung open by encroaching tides, the conservative and deeply religious Tangiermen ponder the end times. Chesapeake Requiem is an intimate look at Tangier by an acclaimed journalist who spent much of the past two years living among its people, crabbing and oystering with its watermen, and observing its odd ways.

4. Rising: Dispatches from the New American Shore, by Elizabeth Rush (Milkweed Editions 2018/2019, 328 pages, .00 paperback) / An interview with the author can be streamed here.

Rising seas are transforming the coastline of the United States in irrevocable ways. In Rising, Elizabeth Rush guides readers through some of the places where this change has been most dramatic. For many of the plants, animals, and humans in these places, the options are stark: retreat or perish in place. Weaving firsthand testimonials from those facing this choice – a Staten Islander who lost her father during Sandy, the remaining holdouts of a Native American community on a drowning Isle de Jean Charles, a neighborhood in Pensacola settled by escaped slaves hundreds of years ago – with profiles of wildlife biologists, activists, and other members of these vulnerable communities, Rising privileges the voices of those often kept at the margins.

5. Trees in Trouble: Wildfires, Infestations, and Climate Change, by Daniel Mathews (Counterpoint Press 2020, 304 pages, .00) / An interview with the author can be streamed here.

Climate change manifests in many ways across North America, but few as dramatic as the attacks on our western pine forests. In Trees in Trouble, Daniel Mathews tells the urgent story of this loss, accompanying burn crews and forest ecologists as they study the myriad risk factors and refine techniques for saving this important, limited resource. Scrupulously researched, Trees in Trouble not only explores the devastating ripple effects of climate change, but also introduces us to the people devoting their lives to saving our forests. Mathews also offers hope: a new approach to managing western pine forests is underway. Trees in Trouble explores how we might succeed in sustaining our forests through the challenging transition to a new environment.

Terry Tempest Williams’s fierce and spirited essays are a howl in the desert. She asks: “How do we find the strength to not look away from all that is breaking our hearts?” Here, Williams bravely and brilliantly explores the many forms of erosion we face: of democracy, science, compassion, and trust. She examines the cultural and environmental implications of the gutting of Bear Ears National Monument; of the undermining of the Endangered Species Act; of the relentless press by the fossil fuel industry that has led to “oil rigs light[ing] up the horizon.” And she testifies that the climate crisis is not an abstraction, offering as evidence the drought outside her door. Erosion is a book for this moment, political and spiritual at once. Williams reminds us that beauty is its own form of resistance, and that water can crack stone.

7. Wilding: Returning Nature to Our Farm, by Isabella Tree (New York Review Books 2019, 392 pages, .95 paperback) / An interview with the author can be streamed here.

For years Isabella Tree and her husband, Charlie Burrell, farmed Knepp Castle Estate and struggled to turn a profit. By 2000, with the farm facing bankruptcy, they decided to try something radical. They would restore estate’s 3,500 acres to the wild. Using herds of free-roaming animals to mimic the actions of the megafauna of the past, they hoped to bring nature back to their depleted land. In the face of considerable opposition the couple persisted with their experiment and soon witnessed an extraordinary change. New life flooded into Knepp, now a breeding hotspot for rare and threatened species. At a time of looming environmental disaster, Wilding is an inspiring story of a farm, a couple, and a community transformed. Isabella Tree’s book brings together science, natural history, a fair bit of drama, and – ultimately – hope.

8. Wilding: Returning Nature to Our Farm, by Isabella Tree (New York Review Books 2019, 392 pages, .95 paperback) / An interview with the author can be streamed here.

For years Isabella Tree and her husband, Charlie Burrell, farmed Knepp Castle Estate and struggled to turn a profit. By 2000, with the farm facing bankruptcy, they decided to try something radical. They would restore estate’s 3,500 acres to the wild. Using herds of free-roaming animals to mimic the actions of the megafauna of the past, they hoped to bring nature back to their depleted land. In the face of considerable opposition the couple persisted with their experiment and soon witnessed an extraordinary change. New life flooded into Knepp, now a breeding hotspot for rare and threatened species. At a time of looming environmental disaster, Wilding is an inspiring story of a farm, a couple, and a community transformed. Isabella Tree’s book brings together science, natural history, a fair bit of drama, and – ultimately – hope.

From pole to pole and across decades of lived experience, National Book Award-winning author Barry Lopez delivers his most far-ranging, yet personal, work to date. Horizon moves indelibly, immersively, from Western Oregon to the High Arctic; from the Galápagos to the Kenyan desert; from Botany Bay in Australia to the ice shelves of Antarctica. Along the way, Lopez probes the long history of humanity’s thirst for exploration, including prehistoric peoples, 16th & 17th century explorers, 17th and 18th century colonialist, and today’s ecotourists in the tropics. And always, throughout his journeys to some of the hottest, coldest, and most desolate places on the globe, Lopez searches for meaning and purpose in a broken world.

10. Disappointment River: Finding and Losing the Northwest Passage, by Brian Castner (Penguin Random House 2018/2019, 368 pages, .95 paperback) / An interview with the author can be streamed here.

Fourteen years before Lewis and Clark, Alexander Mackenzie set off to cross the continent to find a trade route to the riches of the East. What he found was a river that he named “Disappointment.” In this book, Brian Castner retraces Mackenzie’s travels, taking readers to a world rarely glimpsed in the media, a world of tar sands, thawing permafrost, remote indigenous villages and, at the end, a wide open Arctic Ocean that could become a far-northern Mississippi of barges, pipelines and oil money. Disappointment River transports readers back to the heroic age of North American exploration and places them in a still rugged but increasingly fragile Arctic wilderness in the process of profound alteration by the dual forces of globalization and climate change.

11. The End of Ice: Bearing Witness and Finding Meaning in the Path of Climate Disruption, by Dahr Jamail (The New Press 2019/2020, 288 pages, .99 paperback) / An interview with the author can be streamed here.

In The End of Ice, we follow acclaimed journalist Dahr Jamail as he scales Denali, the highest peak in North America, dives in the warm crystal waters of the Pacific only to find ghostly coral reefs, and explores the tundra of St. Paul Island where he meets the last subsistence seal hunters of the Bering Sea and witnesses its melting glaciers. Accompanied by climate scientists and people whose families have fished, farmed, and lived in the areas he visits for centuries, Jamail begins to accept the fact that Earth, most likely, is in a hospice situation. Like no other book, The End of Ice offers a firsthand chronicle of the catastrophic reality of our situation and the incalculable necessity of relishing this vulnerable, fragile planet while we still can.

Modern civilization has created objects and landscapes with the potential to endure through deep time, whether it is plastic polluting the oceans or nuclear waste sealed within the earth or the 30 million miles of roads spanning the planet. Our carbon could linger in the atmosphere for 100K years, and the remains of our cities will still exist millions of years from now as a layer in the rock. Traveling from the Baltic Sea to the Great Barrier Reef, and from an ice-core laboratory in Tasmania to Shanghai, Farrier describes a world that is changing rapidly, with consequences beyond the scope of human understanding. As much a message of hope as warning, Footprints will not only alter how you think about the future; it will change how you see the world today.