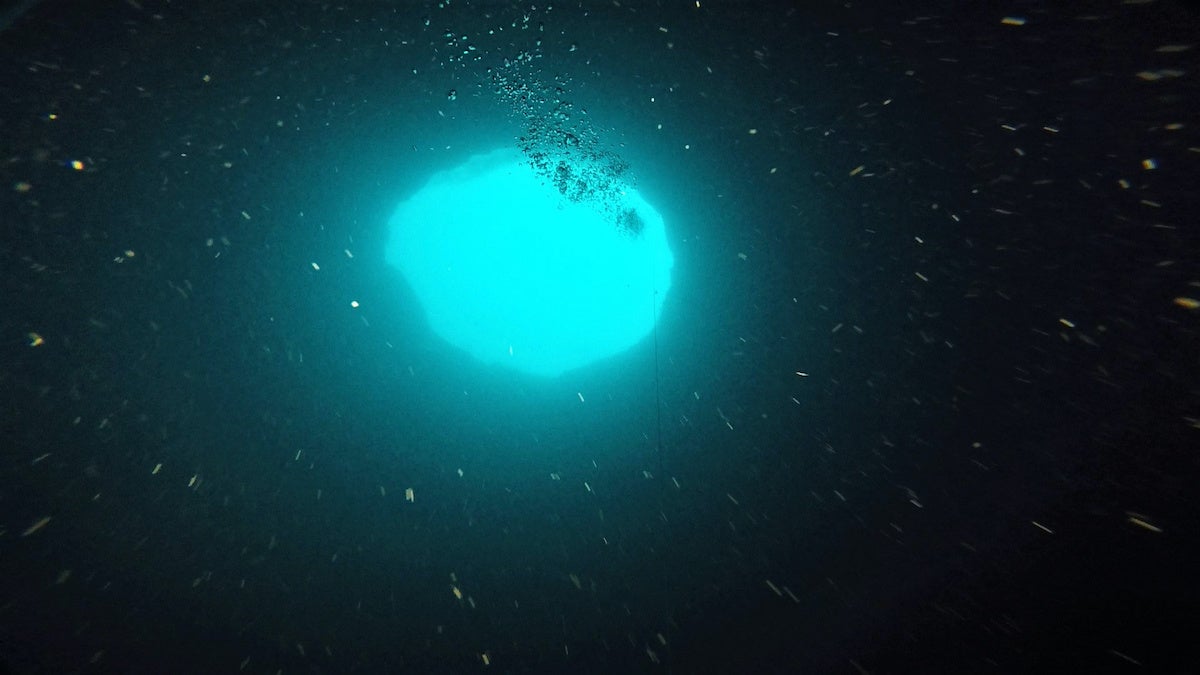 Green Banana will be explored using the same techniques developed for the Amberjack Hole, seen here from a diver's view in 2019. Mote Marine Laboratory

Scientists are rushing to Florida’s Gulf Coast to explore a mysterious blue hole located 425 feet deep on the ocean floor.

The mysterious hole, called the Green Banana by scientists, is 155 feet below the surface of the water and is similar to a sink hole on land, according to scientists from the National Oceanic and Atmospheric Administration (NOAA), as ABC News reported.

In a statement, NOAA explained why blue holes are both perplexing and important:

“Little is known about blue holes due to their lack of accessibility and unknown distribution and abundance. The opening of a blue hole can be several hundred feet underwater, and for many holes, the opening is too small for an automated submersible. In fact, the first reports of blue holes did not come from scientists or researchers, but actually came from fishermen and recreational divers.”

This sinkhole, which extends nearly 300 feet, is giving researchers from NOAA a chance to explore what purpose these holes serve and what effect they have on the ecosystem, according to Popular Mechanics.

NOAA said that there are many underwater sinkholes, springs and caverns scattered across Florida’s Gulf continental shelf, but they have no idea how many there are or where to find them, as CBS News reported. Every hole differs in size, shape and depth, and scientists believe that most host a diverse range of plants and animals.

The year-long expedition of Green Banana will start in August, NOAA said. The team will include scientists from Mote Marine Laboratory, Florida Atlantic University, Georgia Institute of Technology and the U.S. Geological Society, as Phys.org reported.

According to researchers at Mote Marine Laboratory, the holes likely formed roughly 8,000 to 12,000 years ago, when the Florida coastline was about 100 miles further offshore from where it is now due to lower sea levels, as CBS News reported. While there is no clear discovery date, local fishermen and divers have wondered about the mysterious holes for decades.

“It was more like word of mouth … these divers would go out and try to find it, and they had plenty of days where they didn’t find anything and other days where, ‘Eureka! There’s a hole!'” researcher Emily Hall, a staff scientist and program manager at Mote Marine Laboratory, told CBS News.

The holes appear to host diverse biological communities full of marine life, including corals, sponges, mollusks, sea turtles and sharks. They also discovered two dead but intact smalltooth sawfish, an endangered species, at the bottom of the hole, according to NOAA. So far, NOAA scientists have collected 17 water samples from the area surrounding the hole along with four sediment samples, according to ABC News.

The researchers are hoping to see if the blue hole is secreting nutrients or harbors microenvironments or new species of microbes. They will also examine whether or not the blue holes are related to Florida’s groundwater, or if the two affect each other in any way, and how the blue holes affect the global carbon cycle, according to CBS News.

Planning for the August expedition is remarkably complicated. Green Banana is 20 percent deeper than previously explored blue holes. “The configuration of the hole is somewhat hourglass shaped, creating new challenges for the lander deployment and water sampling,” NOAA said, as Popular Mechanics reported.