Black Carbon Larger Cause of Climate Change Than Previously Assessed 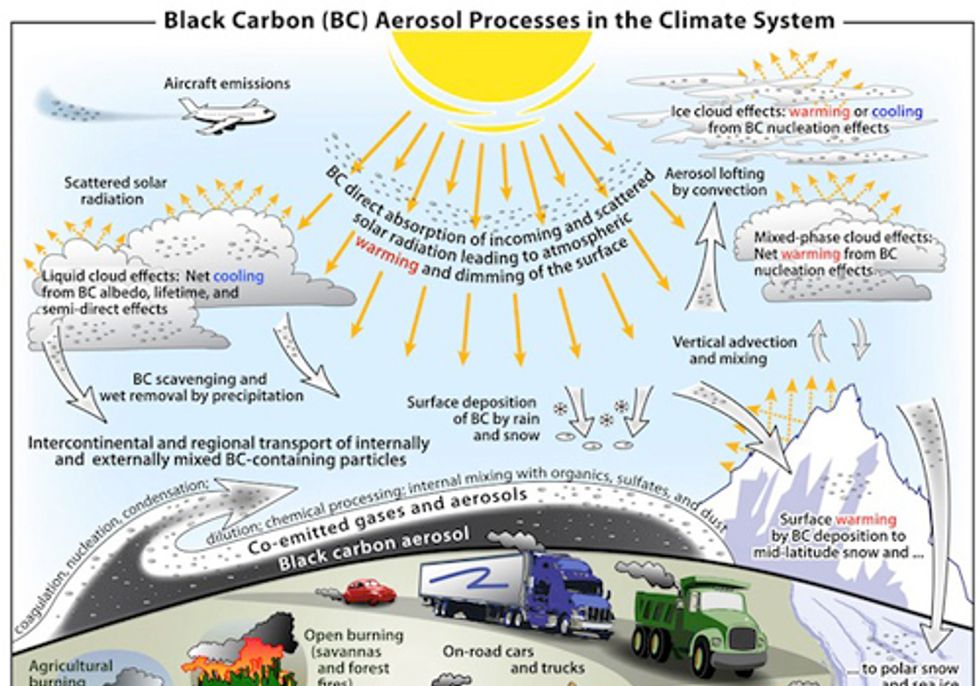 Thirteen years after Jim Hansen described the significant role of black carbon for climate stabilization,1 in a comprehensive assessment of black carbon and climate released on Jan. 15, a team of 31 worldwide experts have confirmed the importance to combating global warming by reducing black carbon from targeted pollution sources.

Schematic overview of the primary black carbon emission sources and the processes that control the distribution of black carbon in the atmosphere and determine its role in the climate system [Bond et al., 2013].

The authors of the study, Bounding the role of black carbon in the climate system: A scientific assessment, have developed a best estimate of black carbon’s direct influence on atmospheric warming that is almost two times higher than most previous work, including the estimates in the last Intergovernmental Panel on Climate Change (IPCC)—from 0.34 W/m2 (0.27°C) to +0.71 W/m2 (0.57 °C)2.

The Clean Air Task Force (CATF) welcomes this paper, which was four years in the making and adds more certainty to a number of questions about the effectiveness of controlling black carbon as a climate mitigation strategy. A particular thorny issue—the effects of black carbon on clouds—remains complicated, but the study concluded that black carbon is not having a strong cooling influence on clouds, which strengthens the case for mitigation efforts. When all effects of black carbon are included i.e., the effects on snow and clouds, the best estimate of the climate forcing impact of black carbon is stronger than previous estimates—at a total forcing: 1.1 W/m2 (0.88 °C) or two-thirds of the warming to date from CO2.

The assessment also confirms that black carbon causes significantly higher warming over the Arctic from a combination of the warming effect on the atmosphere and the additional effect of black carbon darkening snow and accelerating the melting of Arctic snow and ice.

Although the study bolsters the case that black carbon is a powerful global warming agent, it also corroborates previous analyses that mitigation actions must be carefully targeted to certain pollution sources for maximum effectiveness. Black carbon is emitted by the incomplete combustion of fuel and emitted with a mixture of gases and aerosols that both warm and cool over the short and long term.

Reductions will be most climate beneficial depending on that mix of emissions composition other aerosols such as organic carbon and gases, including sulfur dioxide, oxides of nitrogen and carbon dioxide as well as location of the source of pollution. The study looks closely at the best-known sources of black carbon and their total impacts to the climate and identifies diesel engines, brick kilns and residential cook stoves as the most promising sources for mitigation.

CATF has been working to navigate a defensible scientific and action roadmap to first understand and then win reductions from black carbon-rich sources. Guided by the previous work of the study’s authors, CATF has worked for nearly a decade to advocate for effective policies to reduce black carbon emissions including:

Based on the new evidence in today’s study, there are a number of actions to push for to quickly reduce black carbon. The U.S. should demonstrate leadership on black carbon by advancing policies that reduce emissions from the large fleet of older diesel vehicles in the U.S. and from natural gas systems. Measures include:

The U.S. should also call for:

The best news is that all of these are targeted sources in the Bounding paper. Further, the paper gives us—and others—the confidence to keep our shoulder at the wheel, knowing that we are making even greater inroads with this work than we thought when we were inspired to get started.