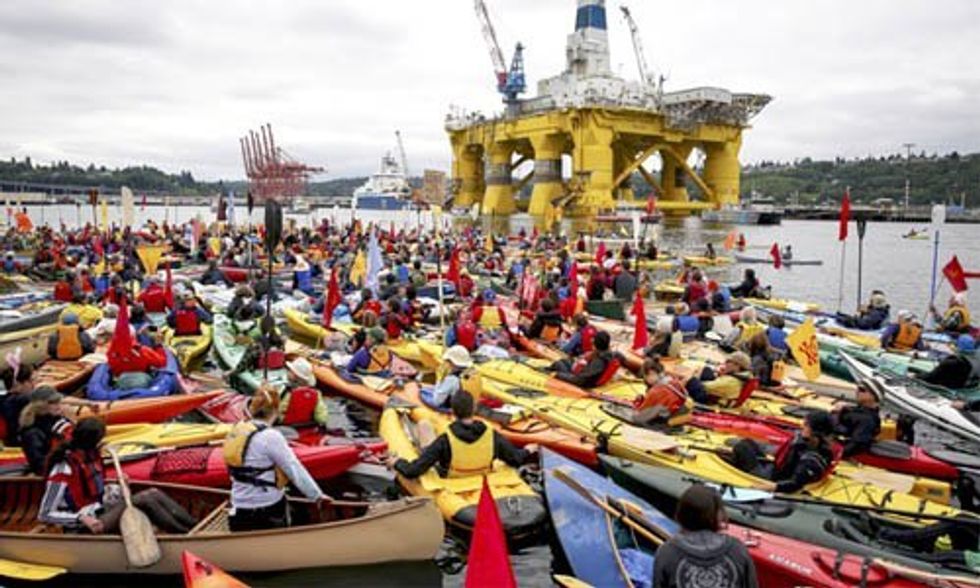 When they say a picture is worth a thousand words, writers rebel (or they write 1,500 words). I mean, pictures are great, but they can’t get across complicated concepts. Except when they can.

Which would be the summer of 2015, on two separate occasions. Early in the summer, on the West Coast of the U.S., “kayaktivists” in Seattle Harbor surrounded Shell Oil’s giant Polar Pioneer drilling rig, trying to keep it from getting out of the harbor. They didn’t succeed in that, of course—the Coast Guard cleared them out of the way—but they did succeed in reminding everyone of the scale of the destruction Shell has planned. The sight of those small, many kayaks against that one brute drilling platform brought home the existential nature of the struggle: it’s all of us, the little guys, against the immense, concentrated wealth and power of the biggest companies on Earth.

Activists who oppose Royal Dutch Shell's plans to drill for oil in the Arctic Ocean prepare their kayaks for the "Paddle in Seattle" protest on Saturday, May 16, 2015, in Seattle. The protesters gathered at a West Seattle park and then joined hundreds of others in Elliott Bay, next to the Port of Seattle Terminal 5, where Shell's Polar Pioneer drilling rig is docked. Photo credit: Daniella Beccaria / seattlepi.com via AP

And then again earlier this month in Germany, at the amazing #EndeGelande protests, when more than a thousand activists managed to elude authorities and congregate inside Europe’s largest coal mine, in front of what are the world’s single largest terrestrial machines. (One, the Bagger 288 is so big it even has its own song). They sat there for most of the day, and the great machines could do no work—and that means, since they move 240,000 tons of coal a day, that a lot of coal was not mined.

Early in the morning of Aug. 15, approximately 1,500 people set off from the climate camp in Germany’s Rhineland to try and enter one of the vast open-cast lignite mines in the area and block the massive excavators. The Rhineland coalfields are the biggest source of CO2 emissions in Europe. Photo credit: Ruben Neugebauer

But activists can’t stay there forever, and in the end it’s the picture that will do the company and the German government more damage. The Star Wars-like image of people standing in front of the Jurassic digger makes the same point of inhuman, absurd scale.

Pictures don’t always turn the future, of course. The German images reminded me of the most famous picture of the Tiananmen saga ...

... but sadly, the forces behind those tanks are still in control. His courage faced them down for a moment, but their implacable might won the day.

In the energy world, though, I’m willing to bet that these images are poison to the fossil fuel industry. It’s not just because of their sheer inhuman oversized ugliness, but because they manage to look somehow so antique. Or rather, so modern in a postmodern world. We’re moving quickly to a planet where the small and distributed makes more sense than the centralized and gigantic—that’s why you’re likely getting your news from the net, not a TV channel. Even without understanding the science of climate change—the horror that the carbon from that digger and that drill rig is driving—you have a visceral sense that they’re in the wrong moment, the wrong mood.

The fight against Arctic oil and German coal will be long and hard. But we already know, once we’ve won, what the pictures in the textbooks will be.

The World’s Oceans Are in Peril