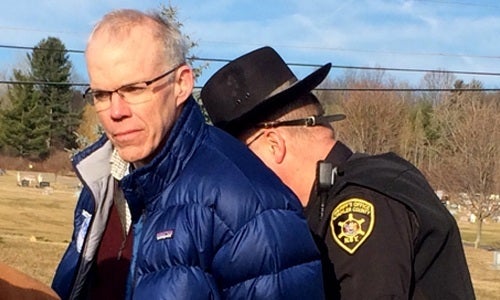 The fight over the fate of the Finger Lakes received national attention today when best-selling author, environmentalist and founder of 350.org, Bill McKibben, joined the opposition. McKibben, 55, was arrested this morning with 56 area residents as part of an ongoing civil disobedience campaign against proposed gas storage in Seneca Lake’s abandoned salt caverns.

This is a developing story, but at this time all arrestees have been released except for McKibben who is still in custody at the Schuyler County sheriff’s department.

Organized by the direct action group, We Are Seneca Lake, the protesters formed a human blockade on the driveway of the gas storage and transportation company, Crestwood Midstream. During the blockade, which began shortly after sunrise, the protesters blocked all traffic entering and leaving the facility.

In a public statement to fellow blockaders, McKibben thanked We Are Seneca Lake for serving as a “curtain raiser” for the larger global movement to break free from fossil fuels that is now unfolding in frontline communities all over the planet.

“Today and every day there are places like this where people are standing up … This place is so important because it’s one of the places where people are understanding that it’s not just carbon dioxide we are fighting, it’s also methane, that there are two greenhouse gases and they are both spurring this incredible heating that we are seeing,” McKibben said. “… If we can hold off the fossil fuel industry for just a few more years, this stuff will never be built again.”

Also arrested today were several prominent local residents. Among them were the Rev. Felicity Wright, pastor of Elmira’s famed Park Church, and Phil Davis, 63, co-owner and operator of Damiani Wine Cellars on the east shore of Seneca Lake and a seventh-generation resident of Schuyler County.

At 6:45 a.m., the group unfurled banners that read, “Methane is Madness. Break Free from Fossil Fuels” and “We Are Seneca Lake. Can You Hear Us Now?”

The group was charged with disorderly conducted and arrested shortly before 8 a.m. by Schuyler County deputies, Watkins Glen police and New York State troopers, and transported to the Schuyler County Sheriff’s department.

The total number of arrests in the 17-month-old civil disobedience campaign has now surpassed 500. 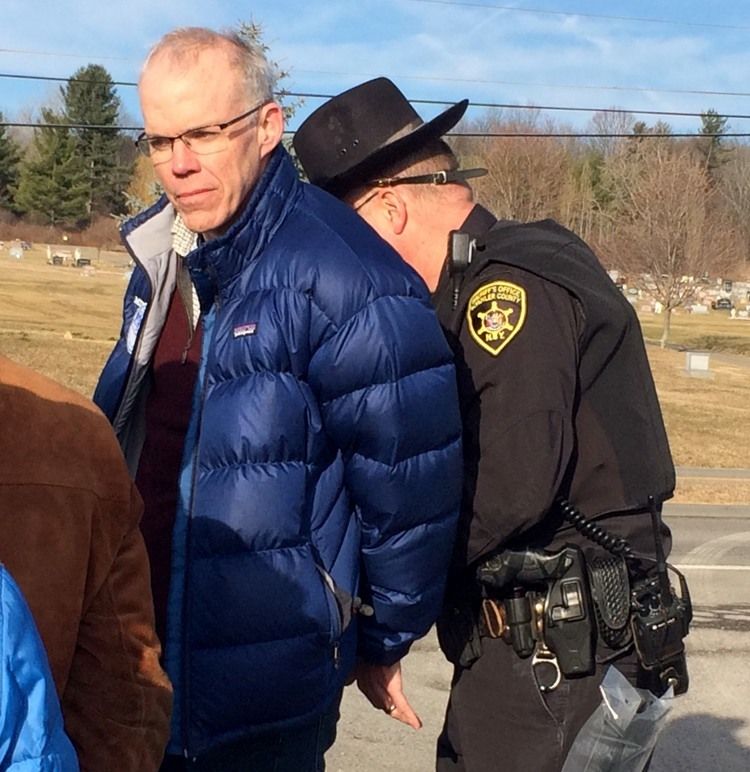 “Climate change is not only an economic and ecological crisis. It is also, for many of us, a moral and spiritual crisis,” Rev. Wright said during the blockade. “Pope Francis understood this well when, in his recent encyclical on the climate crisis, he asks, ‘What kind of world do we want to leave … for those come after us?’ And the answer must be: a world that supports creation, and a world that allows us to be divine agents for what is holy, good, and true.”

Crestwood also seeks to store two other products of fracking in Seneca Lake salt caverns—propane and butane (so-called Liquefied Petroleum Gases, LPG)—for which it is awaiting a decision by Gov. Cuomo’s Department of Environmental Conservation.

“I will stand once again in resistance to this imposition of corporate will upon our people and our land and water,” Davis said this morning. “There is an attitude of arrogance and dismissiveness in the Crestwood communiqués—regarding environmental concerns, community safety concerns, area business concerns—that I find so offensive that I can’t stand by without joining to further the outcry of opposition. My family has been a part of this community for seven generations. I’m here today to lend my back and all my resolve to this fight.”