Academic researchers say the fossil fuel industry engages in 'discourses of delay' to divert attention away from the crisis. 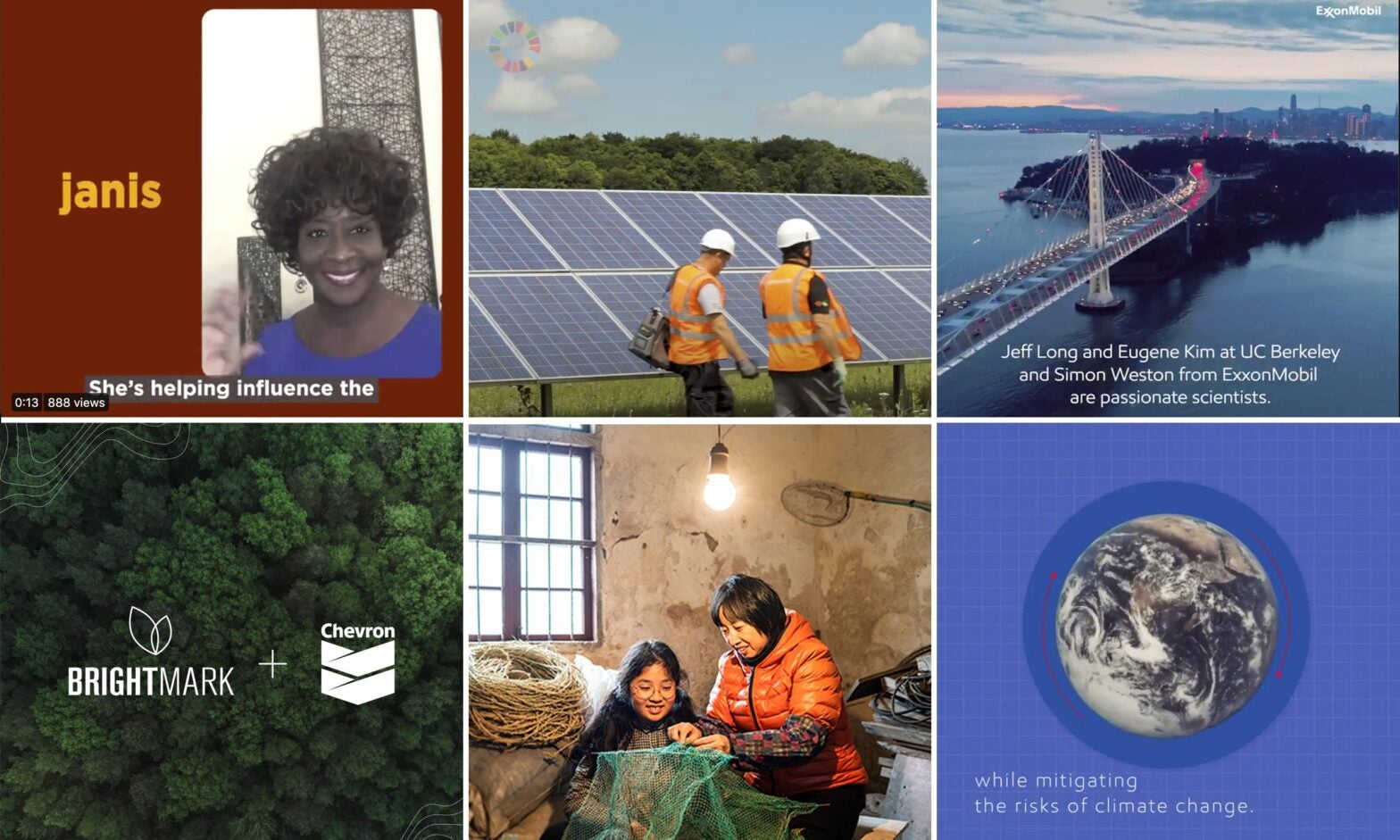 This story originally appeared in The Guardian and is published here as part of Covering Climate Now, a global collaboration of news outlets strengthening coverage of the climate story.

ExxonMobil has been touting its commitment to “reducing carbon emissions with innovative energy solutions”. Chevron would like to remind you it is keeping the lights on during this dark time. BP is going #NetZero, but is also very proud of the “digital innovations” on its new, enormous oil drilling platform in the Gulf of Mexico. Meanwhile Shell insists it really supports women in traditionally male-dominated jobs.

A casual social media user might get the impression the fossil fuel industry views itself as a social justice warrior, fighting on behalf of the poor, the marginalized, and women – at least based on its marketing material in recent years.

These campaigns fall into what a handful of sociologists and economists call “discourses of delay”. While oil and gas companies have a long track record of denying climate change, even after their own scientists repeatedly warned of the harm caused by burning fossil fuels, now the industry’s messaging is far more subtle and in many ways more effective than outright climate science denial.

By downplaying the urgency of the climate crisis, the industry has new tools to delay efforts to curb fossil fuel emissions. And worse yet: even industry critics haven’t fully caught up to this new approach.

“If you just focus on climate denial, then all of this other stuff is missed,” explains Robert Brulle, an environmental sociologist and visiting professor at Brown University.

Brulle, who published a peer-reviewed study in 2019 that analyzed major oil corporations’ advertising spending over a 30-year period, says the “lion’s share” of ad dollars were directed not toward denial, or even toward the industry’s products, but toward pro-fossil fuel propaganda – campaigns that remind people over and over again about all the great things oil companies do, how dependent we are on fossil fuels, and how integral the industry is to society.

“They’re spending probably five or 10 times more on all this corporate promotion advertising,” he says. “And yet the climate movement seems to only focus on the science denial part.”

ExxonMobil has used Twitter campaigns to emphasize progress on addressing climate change while also downplaying the urgency of the crisis. Source: Twitter

Oil companies stopped pushing overt climate denial more than a decade ago. And while conspiracy theories claiming climate change is a hoax may surface occasionally, they are no longer an effective strategy.

Instead, the fossil fuel industry, utilities and the various trade groups, politicians and think tanks that carry water for both, have pivoted to messages that acknowledge the problem, but downplay its severity and the urgency for solutions. Instead companies are overstating the industry’s progress toward addressing climate change.

In a paper published in the journal Global Sustainability last July, economist William Lamb and nearly a dozen co-authors catalogued the most common messaging from those who would prefer to see inaction on climate for as long as possible. According to Lamb’s team, the industry’s “discourses of delay” fall into four buckets: redirect responsibility (consumers are also to blame for fossil fuel emissions), push non-transformative solutions (disruptive change is not necessary), emphasize the downside of action (change will be disruptive), and surrender (it’s not possible to mitigate climate change).

“This was a paper that was born on Twitter, funnily enough,” Lamb says. Lamb and collaborators Giulio Mattoli and Julia Steinberger began compiling the fossil fuel messaging they saw repeatedly on social media. Then they asked other academics from various fields to add what they were seeing too, and patterns soon emerged.

Lamb says they explicitly left denial out of the equation. “What we tried to do was really examine delay as something distinct,” he says. “From our view, delay had not received the kind of attention it deserves.”

Of all the messaging geared toward delaying action on climate, or assurances that the fossil fuel industry has a grip on possible solutions, Lamb and other authors agreed that one theme was far more prevalent than the rest: “the social justice argument.”

This strategy generally takes one of two forms: either warnings that a transition away from fossil fuels will adversely impact poor and marginalized communities, or claims that oil and gas companies are aligned with those communities. Researchers call this practice “wokewashing.” 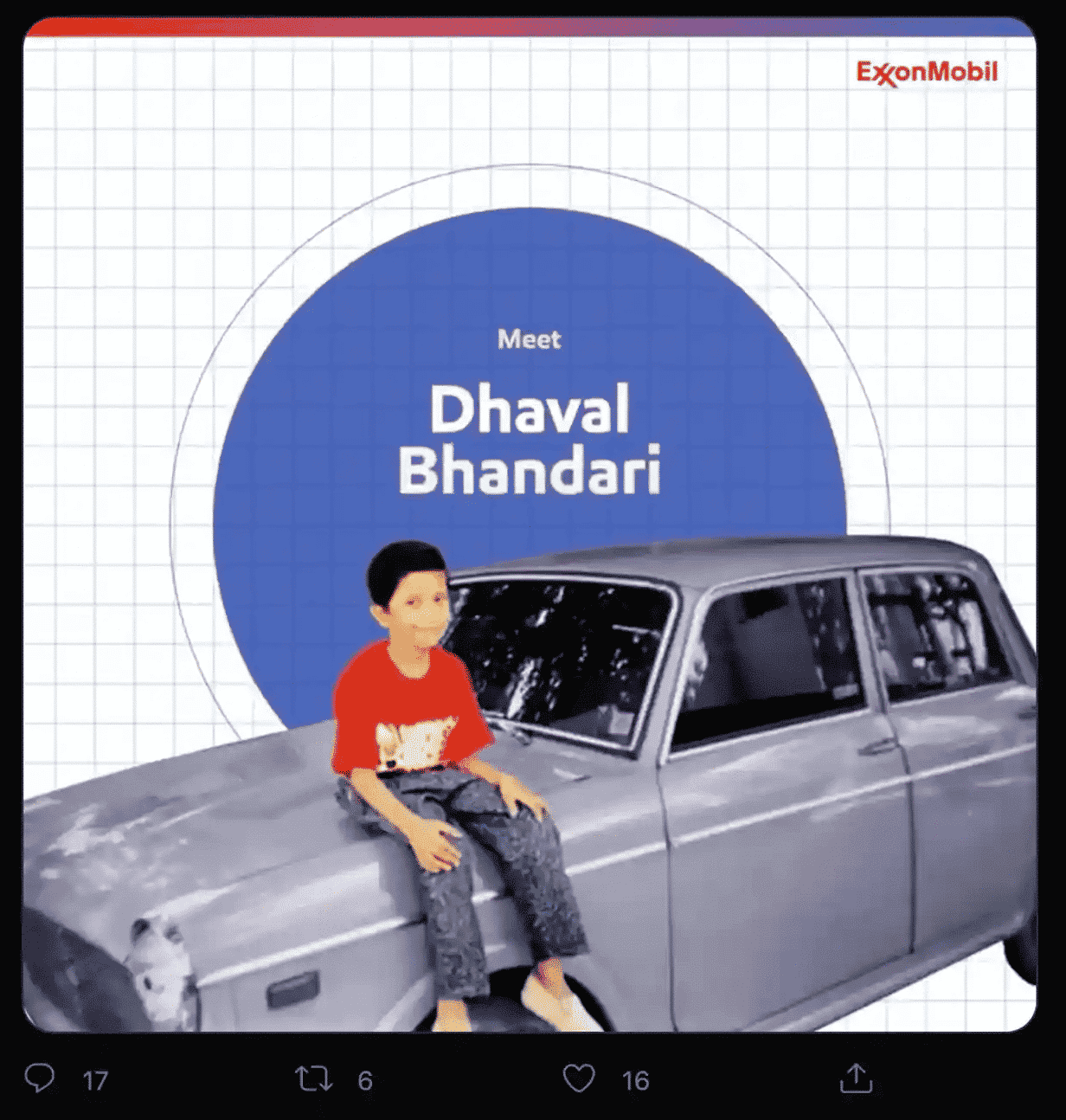 Twitter ads, like this video by ExxonMobil, reflect popular messaging around social justice, implying that the company is aligned with diverse communities. Researchers call this practice ‘wokewashing’. Composite: Twitter

An email Chevron’s PR firm CRC Advisors sent to journalists last year is a perfect example. It urged journalists to look at how green groups were “claiming solidarity” with Black Lives Matter while “backing policies which would hurt minority communities”. Chevron later denied that it had anything to do with this email, although it regularly hires CRC and the bottom of the email in question read: “If you would rather not receive future communications from Chevron, let us know by clicking here.”

Another common industry talking point argues a transition away from fossil fuels will be unavoidably bad for impoverished communities. The argument is based on the assumption that these communities value fossil fuel energy more than concerns about all of its attendant problems (air and water pollution, in addition to climate change), and that there is no way to provide poor communities or countries with affordable renewable energy.

Discourses of delay don’t just show up in advertising and marketing campaigns, but in policy conversations too.

“We’ve gone through thousands of pieces of testimony on climate and clean energy bills at the state level, and all of the industry arguments against this sort of legislation included these messages,” says J Timmons Roberts, professor of environment and sociology at Brown University, and a co-author on the “discourses of delay” paper.

In a recently published study focused on delay tactics in Massachusetts, for example, Roberts and his co-authors catalogued how fossil fuel interest groups and utility companies in particular used discourses of delay to try to defeat clean energy legislation. Another recent study found similar campaigns against clean energy and climate bills in Connecticut. “The social justice argument is the one we’re seeing used the most,” he says.

Lamb sees the same thing happening in Europe. “Often you do see those arguments come from right of center politicians, which suggests hypocrisy in a way because they’re not so interested in the social dimension on parallel issues of social justice like education policy or financial policy.”

While the social justice argument stands out as a favorite at the moment, Lamb says the others are in regular rotation too, from focusing on what individual consumers should be doing to reduce their own carbon footprints to promoting the ideas that technology will save us and that fossil fuels are a necessary part of the solution.

“These things are effective, they work,” Roberts says. “So what we need is inoculation – people need a sort of field guide to these arguments so they’re not just duped.”

Amy Westervelt is an award-winning climate journalist and the founder and executive producer of the Critical Frequency podcast network, which puts out the climate podcasts Drilled, Hot Take, Inherited, and more.