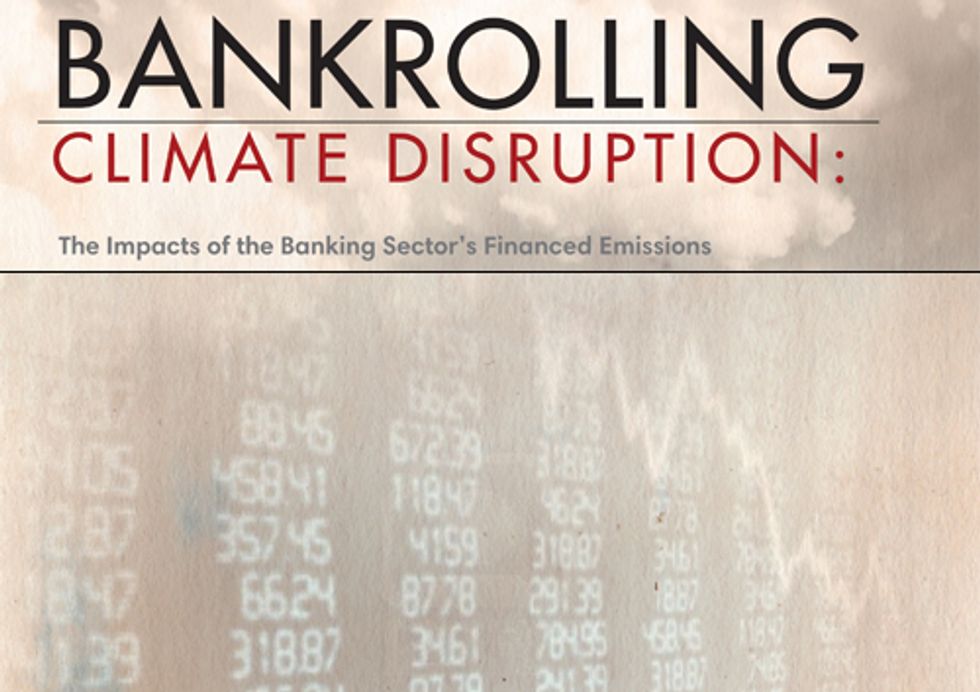 A number of major banks, including Bank of America and JPMorgan Chase, invest in the acceleration of climate change each year by committing billions to polluting energy industries like coal, according to a report published yesterday by Rainforest Action Network (RAN).

The report, Bankrolling Climate Disruption: The Impacts of the Banking Sector’s Financed Emissions, finds that major banks have failed to reduce investment in carbon-intensive companies at a time of global climate chaos. The report also demonstrates that major banks have failed to properly measure their carbon footprint, despite the availability of comprehensive guidelines enabling them to do so.

“Rising concentrations of greenhouse gases in the atmosphere have begun to disrupt the global climate, triggering extreme weather events around the globe,” said Ben Collins, research and policy campaigner for RAN. “To address this growing climate crisis, the global economy must rapidly transition to low-carbon energy sources that can power our future.”

While the transition could pose challenges for the banking sector, which hold financial relationships to some of the most polluting industries like coal, the report offers guidance on both measuring and reducing emissions.

“Banks will need to shift financing from fossil fuel-based power sources to low-carbon energy infrastructure for our communities and the climate,” Collins continued. “One way of doing that is by measuring the climate impact of investments and committing to reduction targets for financed emissions, now.”

RAN’s report draws attention to the chasm between the relatively modest climate impact of the banking sector’s physical operations and that of the energy and mining companies it finances. According to the report, financed emissions—the greenhouse gas (GHG) emissions generated by investments in fossil fuels—increase the magnitude of carbon output of the world’s major banks. The report points out that, while banks have adopted policies to address the pollution from their offices and branches, they fail to measure or reduce the emissions induced by loans, investments, and other financial services of fossil fuel companies.

The report cites JPMorgan Chase as an example, highlighting the disparity between its ambitious goal of reducing its GHG emissions to 80 percent of 2005 levels by 2012, and its relationship with Duke Energy, which in 2010 was one of the largest carbon emitters in the US electric power sector.

“The climate footprint of energy financing activities is estimated to be 100 times larger than those that banks emit through operations,” said Amanda Starbuck, RAN's energy and finance campaign director. “The time has come for banks to address the global impacts of doing business with fossil fuel industries and come clean on their commitments.”

The report also points to the fact that despite the “reputational and financial risks [associated with financing dirty energy], the world’s largest banks have yet to measure the greenhouse gas emissions induced by their investing and financing relationships.” The emergence of tools for measuring financed emissions, including the Greenhouse Gas Protocol can provide a reliable method for banks to quantify and manage financed emissions.

Among the report’s recommendations are that—in order to “reduce and disclose their financed emissions,” banks should “support broadening the GHG Protocol’s disclosure guidelines to measure the full extent of a bank’s exposure to climate risk from its lending, underwriting and investing activities, and disclose comprehensive financed emissions data and commit to financed emissions reduction targets of at least 3.9 percent per year.”