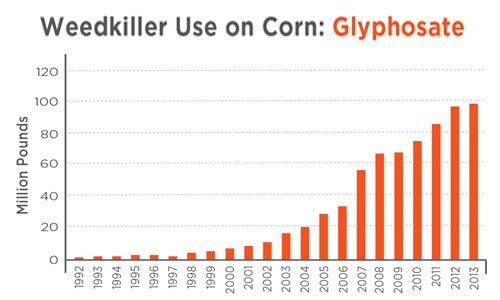 Monsanto marketed its potent weed killer glyphosate—the active ingredient in Roundup—and the corn and soybeans genetically engineered to withstand it, by claiming it would replace other, more toxic weed killers such as atrazine.

But, it didn’t happen.

Since the mid-1990s, American farmers have reduced the amount of atrazine spread on corn fields by just 22 percent, from 0.83 to 0.64 pounds per acre. 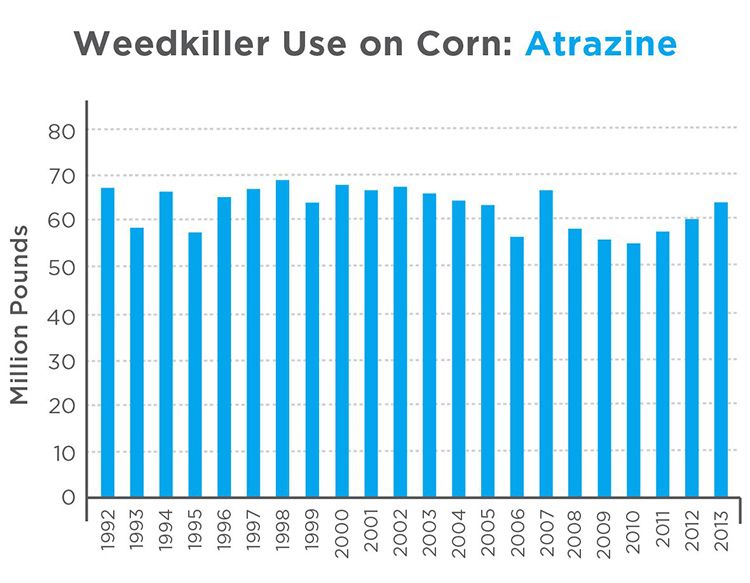 At the same time they have increased their glyphosate usage by 3,000 percent, from 0.03 pounds per acre to just more than 1 pound per acre. Glyphosate has become the most popular agricultural herbicide in the U.S. and globally. 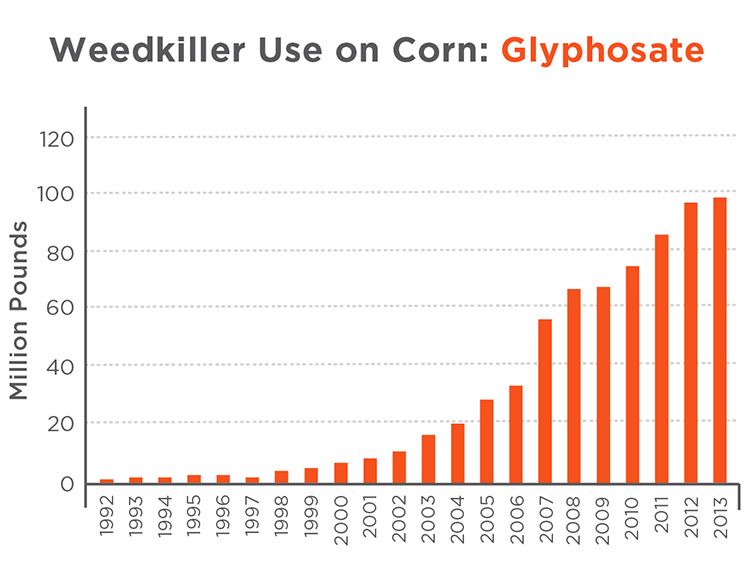 Last week the U.S. Environmental Protection Agency released a document—technically, a “draft assessment”—warning that atrazine threatens wildlife. This was no surprise to scientists who have studied the harmful effects of atrazine for decades. Researchers have found substantial evidence that the chemical contributes to the feminization of male frogs and to reduced sperm count in men.

Because of atrazine’s health hazards and its persistence in groundwater, the European Union has banned it in agriculture.

Recent scientific research suggests that both atrazine and glyphosate are more harmful than scientists once thought.

In light of new evidence on the dangers of glyphosate, European Union nations failed to pass Monday a short-term extension of glyphosate’s license for agricultural use. The pesticide could be barred in the EU as soon as next month.

Proponents of GMO crops claim that they will feed the world and reduce chemical herbicide use, but we now know these promises have fallen flat. Glyphosate hasn’t replaced atrazine. Instead, GMOs have led to more superweeds. Monsanto, Dow Agrosciences and other agricultural chemical manufacturers are coming up with more toxic mixtures of chemicals to fight hardier weeds that have evolved to withstand weedkillers.

It’s a vicious cycle that will be broken only when Congress recognizes the importance of conservation on farms.

A recent report on genetically engineered crops by the National Academy of Sciences recommends that instead of turning to new designer chemicals to combat weeds, farmers should employ integrated weed management techniques such as cover crops and crop rotations. These practices can reduce the amount of chemical herbicides dumped on American farmland and can also save farmers money.

But integrated weed management gets very little funding: Only 1.2 percent of total conservation funding between 2006 and 2015 has gone to promoting prudent weed management practices.

This year, a bill proposed by the House Appropriations Committee would cut U.S. Department of Agriculture conservation programs that promote weed management aimed at reducing chemical applications on farms.

12 Ways to Get Rid of Weeds Without Using Roundup