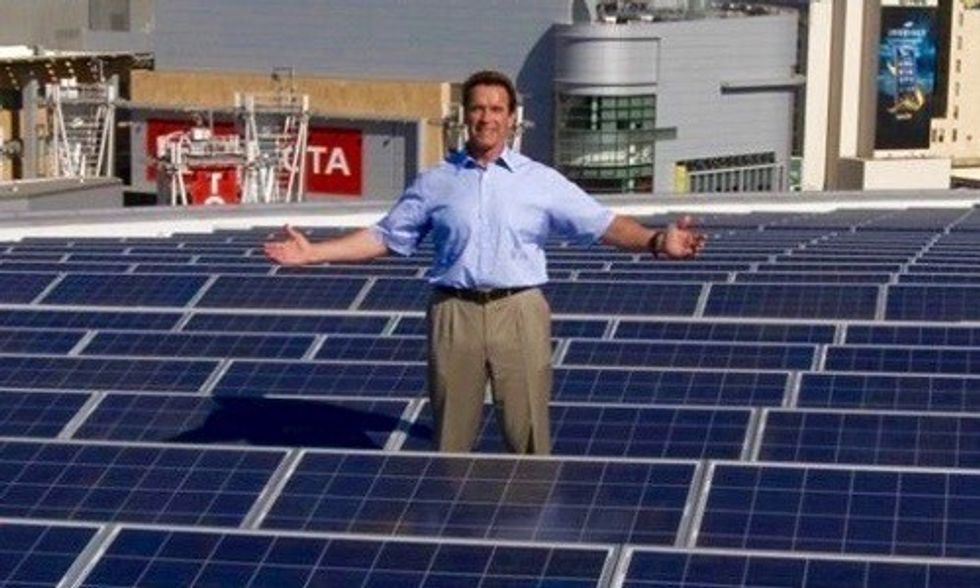 Arnold Schwarzenegger—who is making the rounds at the COP21 talks in Paris—wrote an epic Facebook post yesterday about the threat of climate change and doesn't "give a damn" whether you agree with him or not.

"To use one of the four-letter words all of you commenters love, I don't give a damn if you believe in climate change," the international superstar wrote.

He added, "I couldn’t care less if you're concerned about temperatures rising or melting glaciers. It doesn't matter to me which of us is right about the science."

To date, the post has been "Liked" by nearly 82,000 Facebook users (including a thumbs-up from none other than Facebook head and fellow renewable energy advocate Mark Zuckerberg) and shared nearly 50,000 times on the social networking platform.

In his essay, the former Republican California governor makes it clear on why he wants to see an end to fossil fuels:

First—do you believe it is acceptable that 7 million people die every year from pollution? That's more than murders, suicides, and car accidents—combined.

Every day, 19,000 people die from pollution from fossil fuels. Do you accept those deaths? Do you accept that children all over the world have to grow up breathing with inhalers?

Now, my second question: do you believe coal and oil will be the fuels of the future?

Besides the fact that fossil fuels destroy our lungs, everyone agrees that eventually they will run out. What's your plan then?

The Terminator actor has long used his muscle to take action on the climate front. While he was in office, Schwarzenegger signed the nation's first cap on greenhouse gas emissions in 2006, saying the effort kicks off "a bold new era of environmental protection."

His work has helped put the state on track to reduce emissions to 1990 levels by 2020, a goal set under Schwarzenegger. The former "Governator" also continues to use his clout to speak out on California's devastating drought.

Schwarzenegger is currently in Paris with his successor, Democrat Gov. Jerry Brown. In the video below, the two sit with The Los Angeles Times and said those who think climate change efforts are bad for the economy should look to the efforts made by the Golden State.

Also at the climate conference, Schwarzenegger told The Guardian he wants an immediate solution to the emerging crisis of a warming planet.

“It drives me crazy when people talk about 30 years from now, rising sea levels and so on,” he said. “What about right now? Thousands of people are dying from pollution. People are living with cancer [because of air pollution].”

Common Dreams
Politics
Protesters are seen during a demonstration in front of the White House in Washington, DC on June 1, 2017. Paul J. Richards / AFP / Getty Images

While some mainstream environmental organizations welcomed Tuesday's introduction of the CLEAN Future Act in the House of Representatives, progressive green groups warned that the bill falls far short of what's needed to meaningfully tackle the climate crisis—an existential threat they say calls for bolder action like the Green New Deal.