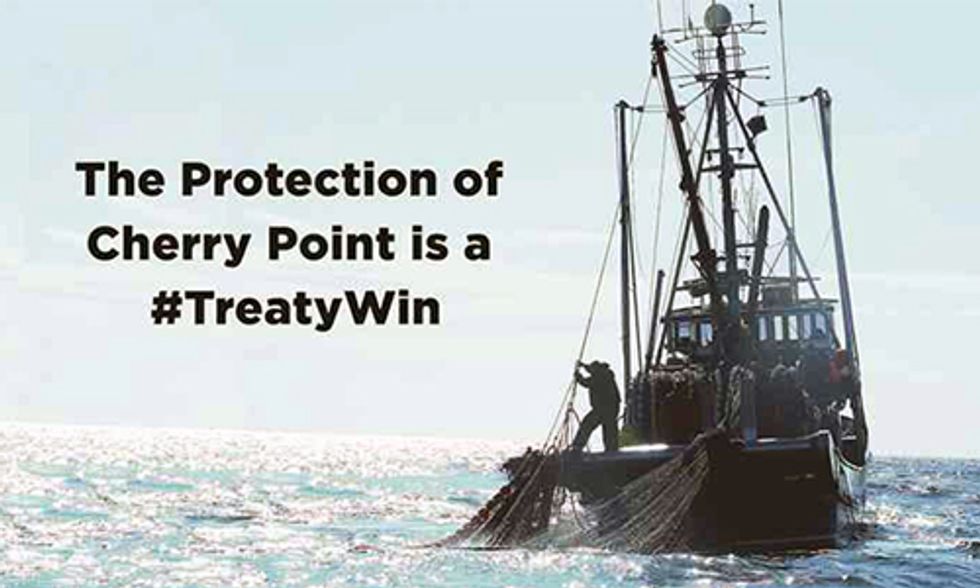 This is big—for our climate, for clean air and water, for our future. It's also big because the U.S. government is honoring its treaty obligations. After a five-year struggle that engaged hundreds of thousands of people, the U.S. Army Corps of Engineers issued a landmark decision Monday to deny federal permits for the biggest proposed coal export terminal in North America—the SSA Marine's proposed Gateway Pacific Terminal, a coal export facility at Xwe'chi'eXen (also known as Cherry Point), Washington.

In January 2015, the Lummi Nation asked the Army Corps to reject the project because it would violate U.S. treaty obligations to project the tribe's fisheries and ancestral lands. This is a huge win for the Lummi Nation and its Northwest community allies over the coal companies.

The Army Corps made the right choice and did its duty by upholding treaty rights and honoring the U.S. government's commitment to those treaties. Time and again, Pacific International Terminals has shown disregard for the Lummi Nation and its allies, who have for years voiced concerns about the project's public health, economic and environmental impacts.

I have had the great honor of joining tribal leaders in the Northwest and the Power Past Coal coalition over the many years of this struggle. The Sierra Club is proud and honored to stand in solidarity with these Tribal Nations and community partners in the fight against coal exports in the Pacific Northwest. I've been inspired and electrified by the hundreds of thousands of activists across the region who have spoken out at public hearings, written letters, submitted comments and rallied for clean energy instead of coal exports.

It's encouraging to see this fossil fuel project that poses great risks and harm to communities, the environment and local economies, receiving the thorough scrutiny it deserves. Northwest families deserve and will accept nothing less than this kind of leadership that protects our health, safety, local economy and climate.

This decision comes on the heels of the recent bankruptcy of Peabody Coal and the news last week that the U.S. crossed the milestone of 100,000 megawatts of coal plant retirements since 2010. Peabody was banking on this project as a major customer for its coal and this announcement deals another blow to promises by coal executives that they have a revival on the horizon—claims that we recently challenged in this open letter to the coal industry and industry analysts.

This is a historic win, but there is a lot more work to do. We will continue to fight until our communities are no longer threatened by these dangerous coal export proposals. Specifically, we will maintain our opposition to this project as long as the developers continue pursuing it and we will leave no stone unturned in our opposition to Millennium Bulk Logistics in Longview, which will have public hearings and a comment period this month and the Fraser Surrey project in British Columbia.

We will continue to fight Arch Coal, Cloud Peak, Peabody Energy and other coal companies that would jeopardize our health, safety, local economies and natural resources—like Lighthouse Resources', Millennium Bulk Terminals, which wants to force a coal export facility into Longview.

These dirty and dangerous projects will not move forward and we will strive to pursue pathways for justice for all communities as justice was upheld today.