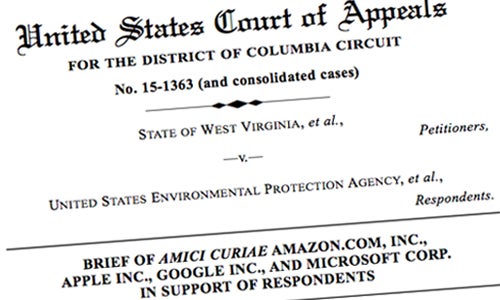 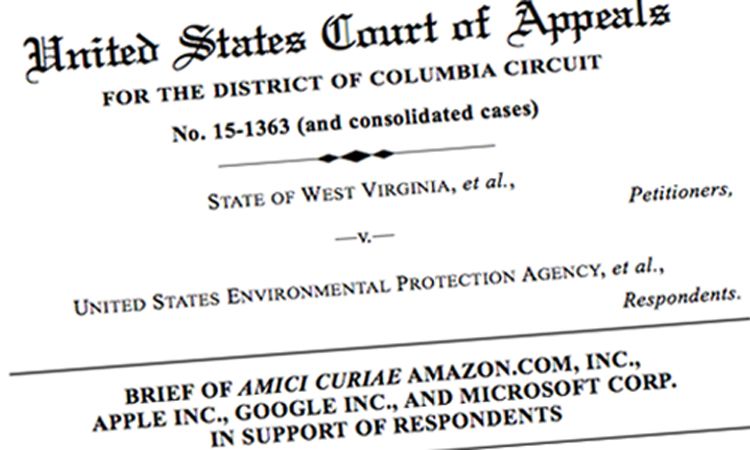 Today Amazon, Apple, Google and Microsoft filed an amicus brief in support of the EPA’s Clean Power Plan, showing the importance of the plan to major electricity consumers and the growing political advocacy by major technology companies for renewable energy.

“Amazon, Apple, Google and Microsoft have each committed to powering their operations with 100 percent renewable energy and they know that achieving these corporate commitments will not be possible without state and federal policy solutions such as the Clean Power Plan that will drive new investment in renewable energy.

“Contrary to claims by Clean Power Plan opponents that these policies will drive business outside of the U.S., some of the largest and fastest growing companies are saying explicitly that they want policies that will lead to a renewable energy future. It’s past time that the governors who have challenged the Clean Power Plan and utilities themselves respond by joining the transition from coal to clean energy.”

As the brief highlights, these companies operate data centers across 12 states and have already been using a range of strategies to successfully deploy renewable energy, strategies that could be pursued by utilities who are covered under the Clean Power Plan.

Greenpeace has challenged major technology companies to help build an internet powered by renewable energy, including by engaging with state and federal policymakers to support policies that would increase renewable energy investment.