Antarctica’s ice sheet is retreating due to warm
ocean water circulating beneath its floating edge, researchers from the UK Centre for Polar Observation and Modelling at the University of Leeds have found.

The
study, published in Nature Geoscience, shows that the Southern Ocean melted 1,463 square kilometers of Antarctica’s underwater ice between 2010 and 2016—an area roughly the size of Greater London.

“What’s happening is that Antarctica is being melted away at its base. We can’t see it, because it’s happening below the sea surface,” professor Andrew Shepherd, one of the authors of the paper, explained to
The Guardian.

The team also produced the first complete map showing that the ice sheet’s submarine edge, or “grounding line,” is shifting. 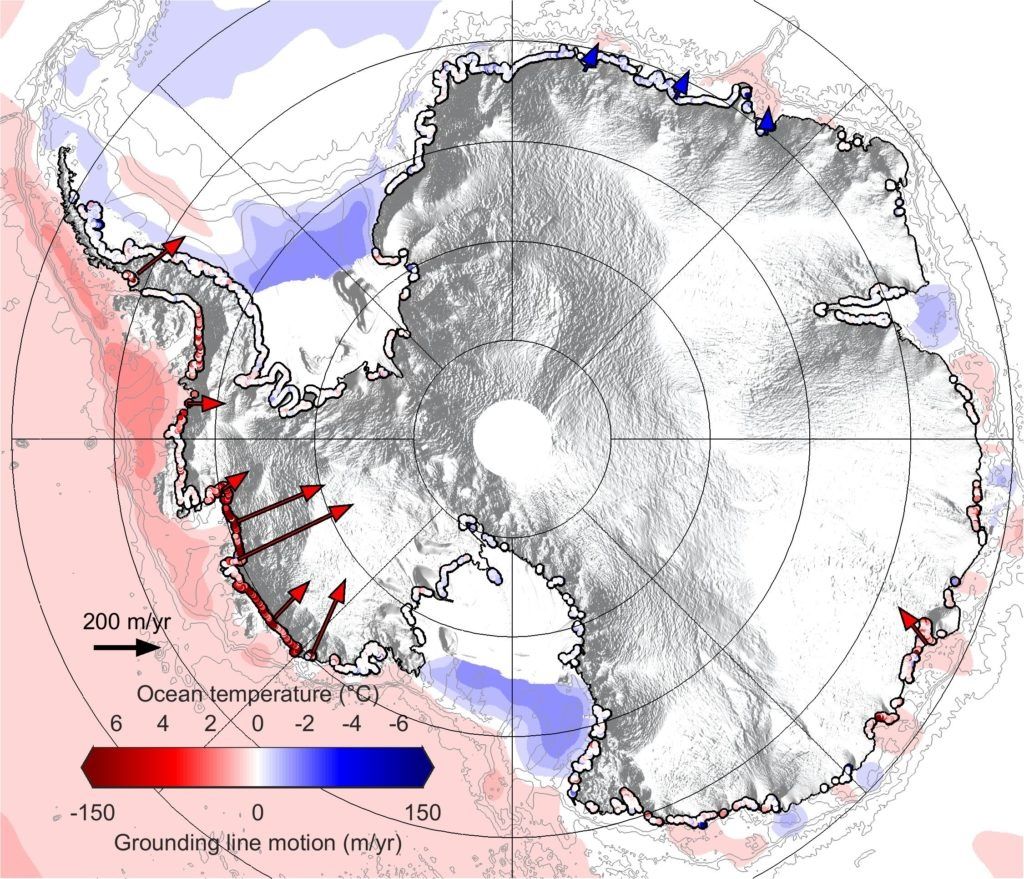 Map showing rates of grounding line migration and their coincidence with ocean conditions around Antarctica between 2010 and 2016Konrad et al.

Lead researcher Dr. Hannes Konrad and his team found “extreme” grounding line retreat at eight of the ice sheet’s 65 biggest glaciers. The pace of deglaciation since the last ice age is roughly 25 meters per year. However, the grounding line at these glaciers has been retreating more than five times that rate, the authors determined.

According to the paper, “Although most of the grounding line is stable, we estimate that 3.3 percent, 21.7 percent and 9.5 percent of East Antarctica, West Antarctica and the Antarctic Peninsula, respectively, are measurably in a state of retreat.”

“The changes mean that very soon the sea-level contribution from Antarctica could outstrip that from Greenland,” Shepherd added to The Guardian.

Konrad noted in a statement, “Our study provides clear evidence that retreat is happening across the ice sheet due to ocean melting at its base, and not just at the few spots that have been mapped before now. This retreat has had a huge impact on inland glaciers, because releasing them from the sea bed removes friction, causing them to speed up and contribute to global sea level rise.”

Although the retreat of some glaciers has sped up, others such as the Pine Island Glacier have halted, the researchers found.

“These differences emphasize the complex nature of ice sheet instability across the continent, and being able to detect them helps us to pinpoint areas that deserve further investigation,” Konrad said.