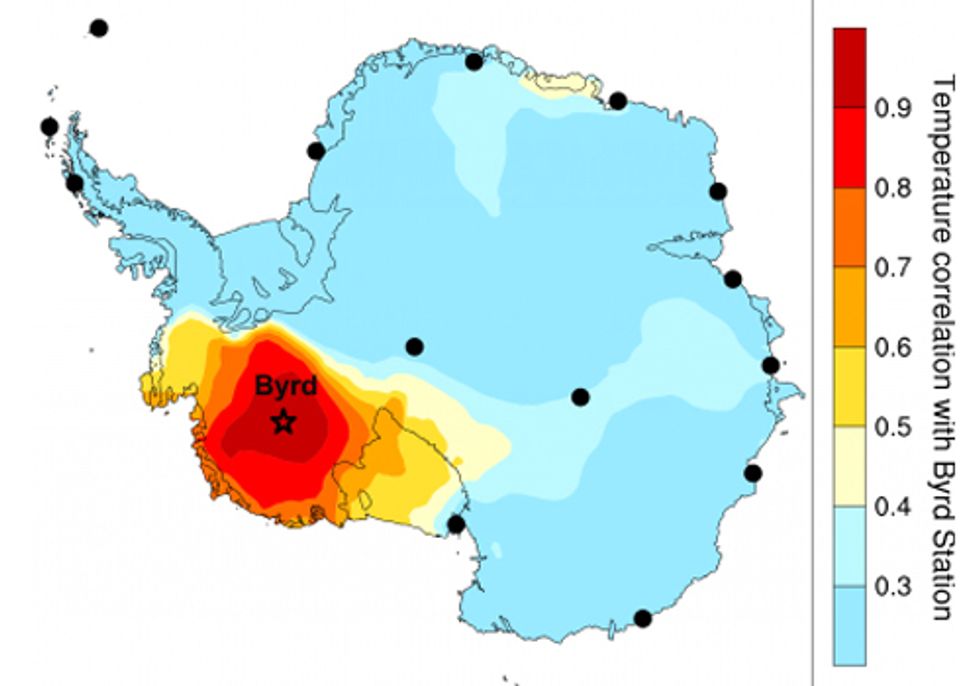 In a finding that raises further concerns about the future contribution of Antarctica to sea level rise, a new study finds that the western part of the continent’s ice sheet is experiencing nearly twice as much warming as previously thought.

Researchers have determined that the central region of the West Antarctic Ice Sheet (WAIS) is experiencing twice as much warming as previously thought. Their analysis focuses on the temperature record from Byrd Station (indicated by a star), which provides the only long-term temperature observations in the region. Other permanent research stations with long-term temperature records (indicated by black circles) are scattered around the continent. The color scale shows the correlation between the annual mean temperatures at Byrd Station and the annual mean temperatures at every other grid point in Antarctica. The high correlation (red and orange) across much of the West Antarctic Ice Sheet implies that the record from Byrd Station can provide insight into temperature changes over a large part of the ice sheet. (Image by Julien Nicolas, courtesy of Ohio State University).

The temperature record from Byrd Station, a scientific outpost in the center of the West Antarctic Ice Sheet (WAIS), demonstrates a marked increase of 4.3 degrees Fahrenheit (2.4 degrees Celsius) in average annual temperature since 1958. The rate of increase is three times faster than the average temperature rise around the globe for the same period.

The study was published Sunday in the journal Nature Geoscience. It was conducted by scientists at Ohio State University (OSU), National Center for Atmospheric Research (NCAR) and the University of Wisconsin-Madison, with funding from the National Science Foundation, which is NCAR’s sponsor.

"Our results indicate that temperature increases during the past half century have been almost twice what we previously thought, placing West Antarctica among the fastest warming regions on Earth,” says NCAR scientist Andrew Monaghan, a co-author. “A growing body of research shows that the West Antarctic Ice Sheet is changing at an alarming rate, with pressure coming from both a warming ocean and a warming atmosphere.”

This study reveals warming trends during the summer months of the Southern Hemisphere (December through February), notes co-author David Bromwich, professor of geography at OSU and senior research scientist at the Byrd Polar Research Center.

“Our record suggests that continued summer warming in West Antarctica could upset the surface mass balance of the ice sheet, so that the region could make an even bigger contribution to sea level rise than it already does,” Bromwich says. “Even without generating significant mass loss directly, surface melting on the WAIS could contribute to sea level indirectly by weakening the West Antarctic ice shelves that restrain the region’s natural ice flow into the ocean.”

Researchers consider the WAIS especially sensitive to climate change because the base of the ice sheet rests below sea level, making it vulnerable to direct contact with warm ocean water. Its melting currently contributes 0.3 millimeters to sea level rise each year. This is second only to Greenland, whose contribution to sea level rise has been estimated as high as 0.7 mm per year.

Filling in the data gaps

Due to its location some 700 miles from the South Pole and near the center of the WAIS, conditions at Byrd Station are an important indicator of climate change throughout the region.

In the past, researchers haven’t been able to make much use of the Byrd Station measurements because of incomplete temperature observations. Since its establishment in 1957, the station has not been occupied continuously. A year-round automated station was installed in 1980, but it has experienced frequent power outages, especially during the long polar night when its solar panels can’t recharge.

The new study fills in the data gaps with a powerful computer model of the atmosphere and a numerical analysis method.

In addition to offering a more complete picture of warming in West Antarctica, the new study shows for the first time that significant melt is occurring during summer. Monaghan says the summertime warmth is particularly troubling because that is the season in which enhanced surface melting could most affect the WAIS and potentially weaken the ice shelves that buttress it.

“We've already seen enhanced surface melting contribute to the breakup of the Antarctic’s Larsen B Ice Shelf, where glaciers at the edge discharged massive sections of ice into the ocean that contributed to sea level rise,” he says. “The stakes would be much higher if a similar event occurred to an ice shelf restraining one of the enormous WAIS glaciers."

“West Antarctica is one of the most rapidly changing regions on Earth, but it is also one of the least known,” says Bromwich. “Our study underscores the need for a reliable network of meteorological observations throughout West Antarctica, so that we can know what is happening—and why—with more certainty.”