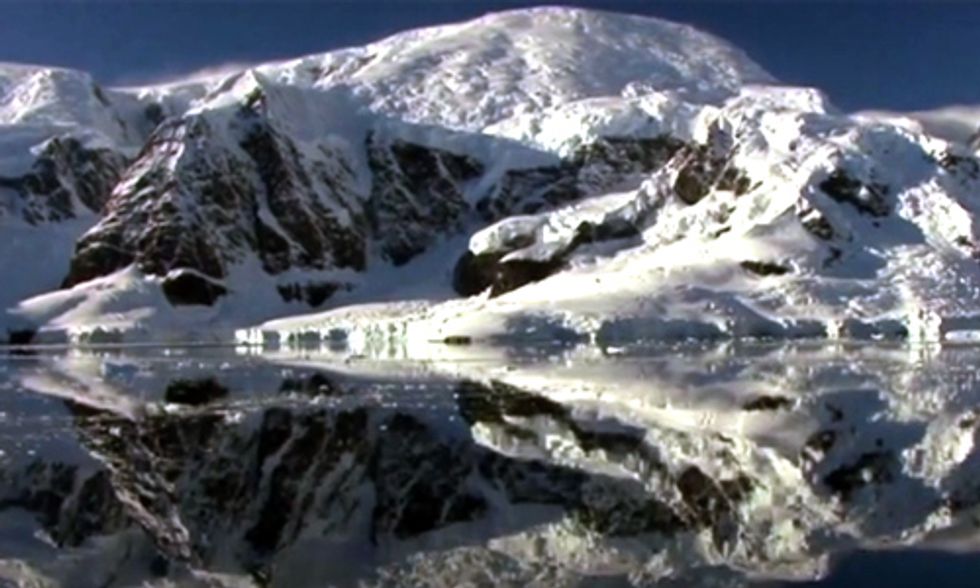 [Editor's note: EcoWatch is tracking Robert Swan's International Antarctic Expedition 2015, which brings together people from around the world to "debate, discuss and determine firsthand the effects of climate change" via a 13-day trip to Antarctica. This is Part II. Read Part I.]

"If Antarctica were music it would be Mozart. Art, and it would be Michelangelo. Literature, and it would be Shakespeare. And yet it is something even greater; the only place on Earth that is still as it should be. May we never tame it." Robert Swan offers this quote from Andrew Denton, an Australian television producer, as his inspiration for fighting to protect the great icy continent.

Robert Swan briefed participants of the International Antarctic Expedition on the climate impacts of Antarctica's rapid melting and the geopolitics of protecting the icy continent. Photo credit: 2041

Swan, the famed Arctic and Antarctic explorer, and his team at 2041 are leading a group of intrepid travelers to Antarctica right now as part of the International Antarctic Expedition. The team, which has been documenting the trip on its Expedition 2015 blog, welcomed travelers from all over the world as they arrived in Ushuaia, Argentina on Friday. They spent Friday and Saturday gearing up for their departure on Sunday. As prep for the expedition, the team hiked up to the Martial Glacier in the mountains overlooking Ushuaia on Saturday. The glacier, which has been steadily retreating for the last 15 years, serves as the first of many physical impacts of climate change that the crew will take in over the next few weeks. In a video from the hike, one trekker says, "Here we are, where the glacier used to be, and that's really frightening."

The 2041 team hiked up to the Martial Glacier, which overlooks the town of Ushuaia, Argentina as preparation for the expedition to Antarctica. Photo credit: 2041

On Friday and Saturday, participants were briefed on the current, political and environmental status of Antarctica. The 2041 team explained how climate change is drastically impacting the icy continent, which has huge implications for the entire globe. All hope is not lost though: Participants brainstormed ways to advocate for change at every level starting with their own communities. Then, on Sunday, the team set sail for Antarctica. Galyna Tymoshenko, who represents Bain & Company, a global management consulting firm, is on the trip and wrote a blog post on the day of the crew's departure. He ended his post with "Today, full of thrill, we are heading south. The journey will take us beyond the edge of the world, beyond the edge of ourselves."

You can track the expedition through the "Ship Tracker" page on 2041's website. They just hit the tip of Antarctica yesterday. The plan is to make numerous shore landings in inflatable rubber boats, or "zodiacs." They will take in stunning ice shelves, calving glaciers, whales and one of the largest gatherings of penguins on the continent.

Robert Swan made a video this weekend explaining the International Antarctic Treaty and the goal of the expedition. In it, he asks: "Do we have the sense to leave one place alone on Earth as a natural reserve for science and peace?"