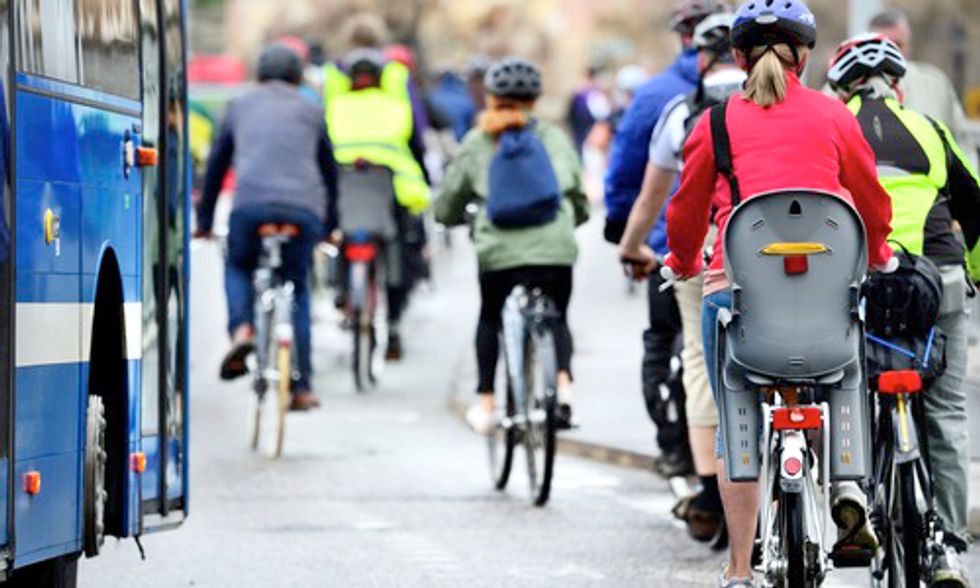 Even if you saw agitating, bumper-to-bumper traffic during your morning commute, know that the numbers say things are changing.

The average American drives 7.6 percent fewer miles today than when per-capita driving peaked in 2004, according to a report issued today by the U.S. Public Interest Research Group Education Fund (PIRG). The study is a review of data from the Federal Highway Administration, Federal Transit Administration and Census Bureau on the nation's 100 most populated, urbanized areas, which are home to more than half of the U.S. population.

From 2006 to 2011, the average number of miles driven per resident fell in almost three-quarters of the country’s largest city's, according to the report.

Graphic credit: U.S. Public Interest Research Group Education Fund
“There is a shift away from driving,” said Phineas Baxandall, Senior Analyst for the U.S. PIRG Education Fund. “The cities in this report are home to most of America’s population and are engines of the economy.
"Policy leaders need to wake up and realize the driving boom is over. Instead of expanding new highways, our government leaders should focus on investing in public transit and biking for the future.”
Here are some standout facts from the report:
Table credit: U.S. Public Interest Research Group Education Fund
The study also found that cities with the largest decreases in driving weren't the same ones hit hardest by the recession. Instead, their economies appear to be the least affected by the recession according to unemployment, income and poverty indicators. PIRG hopes policymakers examine these figures when considering transportation investments of the future.
“Government should support transportation initiatives that reflect these travel trends,” said Baxandall. “Instead of wasting taxpayer dollars continuing to enlarge our grandfather’s Interstate Highway System, we should invest in the kinds of transportation options that the public increasingly favors.”