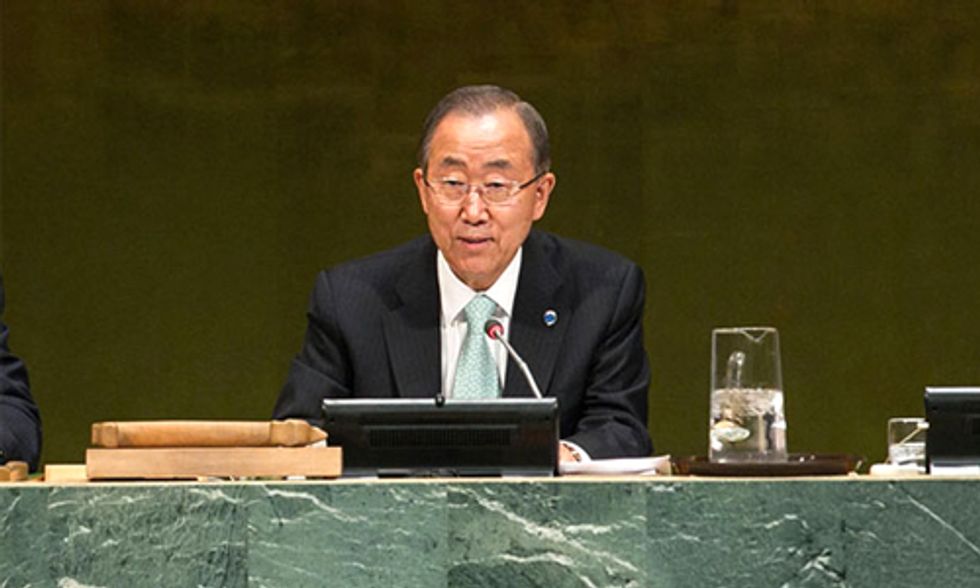 The issue of climate change skyrocketed in public awareness this week as the UN Climate Summit yesterday in New York City, and the historic People's Climate March Sunday joined by 400,000 people, attracted attention and news coverage around the world.

The UN Climate Summit was convened by UN Secretary-General Ban Ki-moon, who invited world leaders from government, finance, business and civil society "to galvanize and catalyze climate action." The event was not intended to strike binding agreements but to build momentum for the December 2015 UN climate conference in Paris.

“The human, environmental and financial cost of climate change is fast becoming unbearable," Ban said at the opening ceremony of the UN Climate Summit. “We need a clear shared vision."

Ban asked the hundreds of attending leaders to bring announcements of proposed actions to "reduce emissions, strengthen climate resilience and mobilize political will for a meaningful legal agreement in 2015."

“To ride this storm we need all hands on deck. Today we must set the world on a new course."

"The summit delivered," said Ban at the end of the day.

Following the opening ceremony, where New York Mayor Bill De Blasio welcomed the visitors to his city and reiterated his city's intention to reduce its greenhouse gas emissions 80 percent by 2050 which he announced a few days earlier, leaders from global nations delivered their statements. His city was among 200 around the world, representing 400 million people, who signed the Compact of Mayors pledging to accelerate their efforts to combat pollution.

Of course, all eyes and ears were on President Obama, since the U.S. is one of Earth's largest contributors to climate change-causing emissions and therefore in a position to do more to address the problem than most countries.

“There's one issue that will define the contours of this century more than any other," said President Obama. “That is the urgent and growing threat of a changing climate."

China, represented by Vice Premier Zhang Gaoli, made a pledge for the first time to cut its carbon emissions, saying it would reach peak carbon emissions as soon as possible and reduce its levels by 45 percent by 2020 over 2005 levels. While China has previously dragged its feet on addressing the issue, excessive pollution levels in its cities have increased public demand for action.

Together, the U.S. and China are responsible for nearly half of all greenhouse gas emissions.

Early Tuesday, before the UN Climate Summit, Greenpeace projected this message on the UN building in NYC in nine languages. Photo credit: Greenpeace

Countries such as France, South Korea and Norway stepped up with financial offers to the UN Green Climate Fund. In all about $2.3 billion was committed by governments yesterday and Ban Ki-moon said he expects more commitments to come. Leaders in the financial sector pledged their own investments.

“A new coalition of governments, business, finance, multilateral development banks and civil society leaders announced their commitment to mobilize upwards of $200 billion for financing low-carbon and climate-resilient development," said Ban. He said that private banks announced they would issue $20 billion in Green Bonds and double the market to $50 billion by next year. And 30 companies announced their support of the Caring for Climate Business Leadership Criteria on Carbon Pricing agreement.

Deforestation, a major cause of climate change, was on the menu, as dozens of governments, businesses and civil groups stepped up with a the New York Declaration on Forests, a promise to cut deforestation in halve by 2020 and end it entirely within the following decade, beginning the process of restoration. Participants included the worlds largest palm oil companies, as well as user companies like Dunkin Donuts and Krispy Kreme. And more than 50 governments, businesses and organizations pledged to join the new Global Alliance for Climate-Smart Agriculture, while aims to feed more people while reducing agriculture's carbon footprint. Even coal and gas companies stepped up with promises to reduce methane emissions.

While leaders from countries like Monaco, Tanzania and Mauritus might have been unknown to the public, Leonardo DiCaprio, newly appointed UN Messenger of Peace, provided a celebrity hook for the event. He spoke to the opening session saying, "As an actor, I pretend for a living. I play fictitious characters, solving fictitious problems. I believe that mankind has looked at climate change in that same way as if it were a fiction. As if pretending climate change wasn't real would make it go away. But I think we know better than that now."

"This body perhaps more than any other gathering than human history now faces this difficult but achievable task," he said. "You can make history or you will be villified by it." He called for "decisive, large-scale action" that went beyond asking people to change their lightbulbs and buy electric cars.

Reaction from environmental organizations was generally positive, although most encouraged further action and pressed for follow-through.

“The more than 400,000 people in New York and many, many more across the globe who marched on Sunday represent a broad, engaged and powerful climate movement demanding jobs, justice and a prosperous clean energy economy free of fossil fuels," said Sierra Club executive director Michael Brune. "We have the momentum and will use it to ensure that our leaders' words today are matched by effective action."

But Greenpeace International executive director Kumi Naidoo said that leader of major economies "must be bolder than they were today."

“Following Sunday's impressive showing of more 400,000 people calling for action on climate change, we've seen some action from world leaders today, but not enough to match the energy of the people marching for their children's future," Naidoo said. "To preserve the health and safety of our planet and the human race, we must meet targets dictated by science—not agreed by politicians."

Rainforest Action Network director Lindsey Allen decried the exclusion of local community leaders at the summit while saying, "It is encouraging that big corporate players have taken the opportunity of the Climate Summit to publicly acknowledge their responsibility in forging a new path toward climate stability, even if many of these are re-statements of existing commitments. These corporations still must turn these statements into actionable policies and demonstrable shifts in practice throughout their global supply chains. It is time for globally binding commitments, the recognition of the traditional and customary rights of forest-dependent communities, and the actionable enforcement of these policies."

Yesterday New Yorkers rallied in the streets to highlight how drilling and fracking operations leak a tremendous amount of methane into the atmosphere, a climate-crippling form of carbon that is 86 times more potent than carbon dioxide. Photo credit: Stefanie Spear

Frances Beinecke, president of the Natural Resources Defense Council, New York City, sounded a hopeful note. "Something extraordinary happened at the United Nations Climate Summit on Tuesday," she said. "One world leader after another took to the podium and described what his or her nation is already doing to reduce climate change pollution. After years of delay, the pace of climate action is picking up. This week confirmed that our voices are being heard. The past three days alone have shown that climate action is growing at every level of society. Joining 400,000 people calling for climate action on Sunday, I felt renewed hope. If concerned citizens and local and national leaders continue to raise our voices, we can respond to the climate threat just in time."