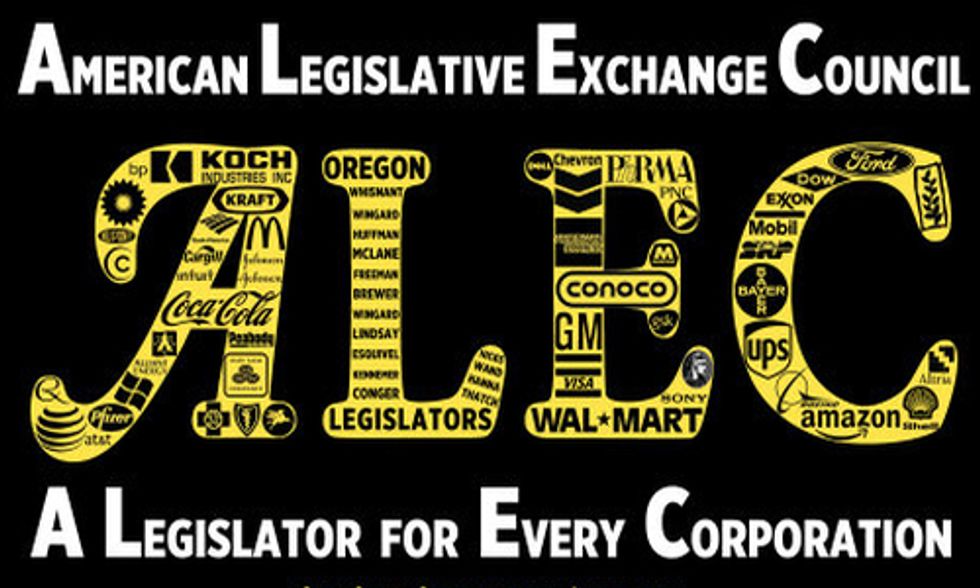 For many of us, this winter makes June feel far away, but you’d think summer is right around the corner judging by the frenzied activity of the American Legislative Exchange Council (ALEC). The Environmental Protection Agency (EPA) is scheduled to propose limits on carbon pollution from power plants this coming June, but ALEC and other polluter groups are not waiting to see EPA's draft standard before they declare opposition.

EPA's upcoming standards will be the first time that carbon limits have ever been set for existing power plants – the largest source of U.S. carbon pollution. The final standard will be issued next year, giving state governments until June of 2016 to design a plan to achieve the needed pollution reductions. But ALEC, a secretive cabal of corporations and conservative state lawmakers, is already pushing two pro-polluter resolutions opposing EPA action. Several of ALEC's corporate members are linked to the coal industry, including Peabody Coal, American Electric Power, and the American Coalition for Clean Coal Electricity.

Most state legislatures are only a few weeks into their 2014 sessions, yet ALEC legislators have already introduced a dozen anti-EPA bills and resolutions across the country, including in Arizona, Florida, Georgia, Illinois, Ohio, Kansas, Missouri, Tennessee, Virginia and West Virginia. These attacks on carbon limits use weak ALEC arguments that don't stand up to scrutiny:

In a misguided effort to protect coal companies, ALEC-affiliated legislators in Missouri, Florida, Kansas, and West Virginia are also pushing legislation that would create serious obstacles for Governors and state agencies. These self-defeating bills would take away a Governor’s flexibility in meeting the EPA standard, forcing the state into more expensive and difficult compliance pathways than necessary. Thankfully, sensible state legislators are already defeating these kinds of bills—in Virginia, the shoddy, restrictive parts of SB 615 were replaced with benign language to study the effects of implementing carbon pollution standards.

Although ALEC resolutions will not change state law, they provide vehicles for polluters to lobby local officials and for politicians to grandstand on behalf of their coal industry campaign contributors. ALEC and its industry supporters are hoping these resolutions will discourage Governors and impede EPA action.

Many public interest groups, including the Natural Resources Defense Council, the Center for Media and Democracy, the Union of Concerned Scientists, Greenpeace and the Energy & Policy Institute among many others are working to expose ALEC’s secretive activity and curb polluter influence in state politics. The National Caucus of Environmental Legislators is also educating their network of state lawmakers to counteract ALEC’s presence in statehouses.

We expect ALEC’s attacks on the EPA to fail, especially since most legislators know their constituents want them to stand up to polluters and to protect their families from climate change.